School isn't fully underway yet, but they ate back to the grind.  So far, so good.  There's mixed feelings for mine.  Actually, none of them wanted to go back.  The oldest told me not to mention it.  Enjoyed his last few days before getting on the bus.

My girls are liking it, but a whole new school and getting used to New things can always be a challenge.  I'm sure they are missing having a recess!!!

I think they are good to have on hand just in case.  What if we all have to ever go back to this and the computer era goes berserk?  Most likely it never would, but maybe we should hold onto some of the old fashioned copies.

One of these days I will take some photos of my mom's old fashioned electric typewriter.  The keys maybe with some flowers.  Couldn't believe how heavy the thing is .

I finished my daughter's knitted skirt, except for the sewing and weaving in the ends.  Now I've started my other daughter's.  They both want the same colors, go figure!!  One is going to be slightly different, I'm lingering on adding a tiny bit of red somewhere so they can tell whose is whose.

They will look cute over leggings.  This is probably a mini skirt on them.  I will be putting the tape measure to them.

Anyone remember getting measured?  I remember a few times.  I've of course been measured when fitted for my bridal dress, bridesmaid dresses and I'm vaguely remembering being fitted for a prom dress.

Then, at different times of my life my Grammy used to measure me for certain projects she was making for myself and the siblings.  She made us housecoats, a skirt, pajamas, and knitted garments.  I always hated being measured by her and Mom especially if it was a sewn garment and they actually had it on us.  You know the occasional prick from the pins, during their measuring process.

Back to my knitted skirts for my girls, I'm going to end up with extra to make some to sell too.  Size 12.  When they are done I will at some point get them on my etsy shop.
. jfaypaperdolls.etsy.com


Well, almost ready to zip up and down a few more streets for the sales.  Got to make it small items as I'm getting ready for a move.  Waiting to lock down a place and I'm getting away from my neighbors.  I will be really happy once I can get that new laptop with secure internet to get them out of my online business.

When I move the only way they should be able to follow me is on this blog or other blogs or places where they can follow me the legal way.

I don't want them hacking anymore.

I'm taking a few days break from all the yo yo circles.  That large basket is full now and I may have to start putting them in something bigger.  A large kitchen bag!!!

I also had a Walking Dead season three day, with popcorn and crafting.  It was fun to catch up with my kids on that!  Got bummed out though when some of my episodes didn't work, getting a new one.

If you follow the show, The Governor combing his daughter, Penny's hair was awesome!!!  I caught that, then saw him tear out a part of her head and knew she was a walker.  Then got surprised she was his daughter.

I missed the other scene with Penny.  Some of their little girl walkers look awesome!  I love that kind of thing.  Creepy and gothic is cool.  I've always been a fan of all those kind of effects, except when I go to try and get creepy or gothic I end up with pretty, beautiful, a little eerie and lovingly done.

Someone once said that of my artwork, lovingly done.

A very lovely compliment.  I put my heart and soul into it, which is why I think if you were to look into the artwork, you would see me. 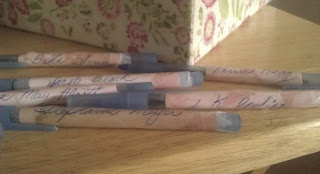 I got this pen idea from flipping through my dream catalog.  In the catalog, they were selling a Jane Austen pen.  Well, you know these catalogs have pretty things but you don't want to spend an arm and a leg for something.  And then you tack on shipping and you are paying How Much for a pen?

Here's my cheap version!!!  Spend a few bucks for your basic pen and tape on your favorite authors.  Then each day you can pick who you feel like writing like.  Today, I will have my fav, vampire, Edward Cullen for inspiration if I can feel like doing some handwriting.

Can so hardly wait to move!!! 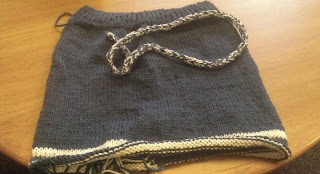 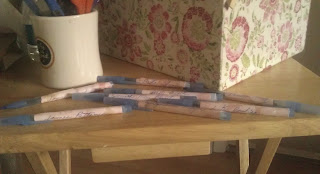 Posted by https://jenniferjofaypaperdolls/blogspot.com at 8:04 AM