Just a few days away and we will be counting down the hours, minutes and sheer seconds to the ball dropping.  Happy New Year!!!  2014.

Talking on the phone with my older daughter, she started to say tick tock, tick tock.  Not quite thinking at the moment why she was saying it, I then began to sing Sing a Song of Sixpence.  I've had that song in my head since Christmas morning.  I think I remembered most of it but got a little loss of memory on the part about the maid.  Was remembering the queen was in the parlor eating bread and honey.

At first I got thinking it better not mean time is up.  We don't want our tick tock hearts to say time is up.  Thinking though, hey, New Years is almost here and the clock is going to go tick tock!!!

Anyway, the new year!!!  I think I got preparing for it today by starting to figure out the bills.  Wish we could have a new year huh where we could just toss all those out the door!!  AS IF!!!!  Anyway, it felt good to just get everything ready to go.

Even going through paperwork and cleaning up was a good thing.  Just ripping up the things we don't need in our lives is great.  That paper pile just adds up and we save it for a rainy day.

Ella, my siamese tortie point was requesting lap time.  She likes to curl up like a baby as I hold her and rock in my rocking chair.  I love my cats.  I told my girls I got Skype so we can video chat on some days I'm not there visiting them.  They always get a phone call, but that would be fun to Skype each other.

Laying off the FB for a little while and I'm just going to be blogging here and working on the novels, recipe books and the other stuff.  Drawings etc...

FB has been my venting and it's private friends and family.  Nobody should threaten me to make it public as it is NOT!  I'm done venting there, but I want them to do me justice someday should I ever find any uninvited man in my apt.  I just pray to god it never happens.  NO RIGHT!!

I do not want my FB friends to ever shove me under the carpet.

I found myself doing my To Do List also today.  Just pondering some things I want to tackle at some point from now and into the beginning of the new YEAR!!!!  And the dishes got done!!!

I've slowly been going into the novel and began to edit.  I've got to work more on that and then get a few of my new chapters in.  I know it's going to take time and yesterday, I just felt like finishing up a cabled headband and started a new one.  It's smaller projects that get done quicker, as I still need time for the knitting.

It's a Prada cabled headband I found a few years back on someone's blog.  I hadn't made it in a long time and wanted to do some more of them.  I'm wearing a yellow one right now for me and will probably try to sell a few of the other ones on Etsy.

To which is the other thing on my to do list to take pictures of some of the knitted items I want to sell on Etsy.  I tackled the Ebay pile and next is the Etsy pile.  Got thinking last week, I should start offering some 8 X 10's of some of my drawings and maybe that would be productive as well.  I'm thinking $12 to $15 is a good price for one on good photo paper.  Just thinking at this point, but that could be cool to sell some copies of my drawings.

Makes me think of the photo greeting cards I used to do too.  Food for thought.  If only I had extra hands which would be quite creepy!!!  My sister thought six hands on a person would be creepy.  Yes!!!  But just saying, we all wish we had extra hands to do everything we want to get done.

Time just seems to evaporate!!!  What do you wish to do in the NEW YEAR?  I think it always is a really fun thing to look forward to.  Good things hopefully.  I'm totally done with having BAD THINGS!!!!  I just want peace, love and happiness.

Oh, I want no Ghost Writer ever for my novels.  I don't want any greedy person ever cashing in on me and have me Ended in the process.  That's not RIGHT!!!  The only people to ever make money off me should be my kids and they will have to wait until I'm old and gray.  Or much older.  It would be kind of fun to see my paper doll business take off and my girls could help me with it if they want.

I remember once in a local Art League I belonged to that we had a speaker come visit who had a family business.  One of the other women in the group said I have something unique and she could see a family business out of it.  The thing that becomes the hardest thing is to get it off the ground and established.  That is the hardest part for anyone starting out as an entreprenuer.

I'm not a huge fan of to do lists anymore but sometimes it is just fun to write one out in case you forget something you need or want to do.

Oh, I never sign anything over to anyone, EVER.  Except my kids a long time from now.  Right now, it would put their dad in charge and I don't want that EVER!!!

But, if I work very hard at my pipe dream or at least a decent dream, I would definitely be able to help my children.  "How much you need, dear?  Five grand?  Don't break Mommy's bank!!"  Just kidding.  As a struggling writer, who knows right?  We don't really know what will happen to our books once we are done writing and are ready to publish.

We trust in the faith we have written something we feel proud of and if the audience we write for loves it, that's a special bonus!  I feel I write from the heart and if I can touch upon another's soul, that's wonderful.

Oh, a Battered Woman never makes anything up.  Just saying.  I don't want to touch much on that as I've written other posts more on this, but I want to stress this.  It's continuing and I've told someone to make it stop!  I'm not married anymore.

I just don't want my tick tock time up.  Nobody should ever threaten me that my time is almost up.  Not funny.

I will not have that happen ever, because I am a VERY STRONG WOMAN!!!!  As with any other woman would agree, if ever there is an intruder in your home, you have the right to attack and defend with anything that is in your apt.  I pray it never happens.

I just don't want to get my whole trilogy done and have someone make me sign it all over to them.  Not cool in my book.  I sign nothing for nobody, EVER.

Anyway, we have a few days left of this year to finish off and enjoy.  I'm going to take this time to enjoy my kids, do some editing, editing and editing, knitting, and some other things.  Including that thought on my cover art.

We can never do it all at once, that's for sure.  I wish we could.  I should read my books on formatting at some point too.  I'm going to end up dropping off my Katharine Hepburn library book too.  I'm going to just have to end up buying the book so I can read it at my leisure.

My goal for the new year is to be much more productive in the WRITING DEPARTMENT!!!!!  And maybe next November, I should see if I can write a novel in a month.  Hmmm...  maybe that is when Lolita Lob it Off gets done?????

Or even a new un-thought of book gets thought up.

I'm going to work on another goal of just trying to NOT WORRY AS MUCH.  I can't control what I cannot control, but I CAN ALWAYS CONTROL ME!!!

Trying hard to not let get others get the best of me is a constant struggle, but it's what we all should try to not let others do it to us.

And my most important goal besides my four children is to KEEP MEAN PEOPLE AT BAY!!!

It seems like every year holds a little bit of the bad or just conflicts.  I don't think any of us can escape that completely.  If it's not one thing, it's something else that crops up. 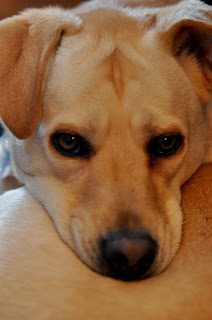 This is a picture of my kids little friend's dog, Lola.  It was taken last year, when my kids had a new sister in the family for a little while.  A very pretty dog.  I thought it was a really nice gesture of the little girl's mother to let my girls keep their cat, Daisy.

Maybe, next I will take some pictures of Daisy to put on here.  Doesn't Lola just look like she wants peace.  Peace, love and happiness is always a pet's way of putting extra love into our lives.

I love my cats and I think if one ever got old and gray, I would have to get a new one.  Still sort of thinking of someday maybe having a pug dog, but it won't be where I'm living now.  Who knows.

I'm just thinking of what they could chew on.  After seeing my sister's golden retriever puppy, Ripley take off with my niece's knitting, I'm thinking hmmm....  do I want a dog?  Love cats.
Posted by https://jenniferjofaypaperdolls/blogspot.com at 2:39 PM