Out comes my Charlie Brown Tree!!

Okay, I finally pulled out my Charlie Brown white seven inch this afternoon and put the ornaments on it.  Not that all the little white branches fell (Not) but the top of the tree looks crushed together!  Oh well, I will say it's better than nothing.

I had one of those little tiny Christmas bread bakers as my only other Christmas decoration.  It's currently holding my son's Senior photo for his yearbook until I can find a nice 5 X 7 frame for it. 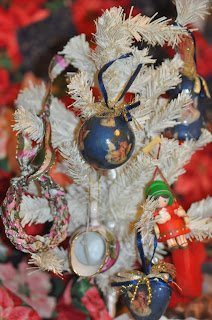 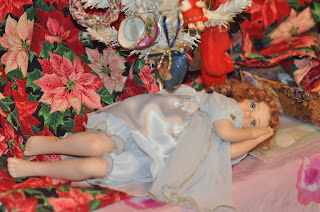 Maybe that's me dreaming about my pipe dream!!!  She's praying!!!  Ha ha ha.  My son and I were talking about travelling and maybe Mom could someday travel anywhere she wants.  My son is looking at the Pacific coast for his college and told me his friend's family are maybe thinking of moving out there to be near my son's friend.

But anyway, I drove away thinking if I could travel anytime I ever wanted, I would be visiting my son and he would say, "Mom, you were just here last week."  I got laughing to myself thinking about that one!

For now, I will settle for some trips to my Maine stomping grounds next year and my family roots. 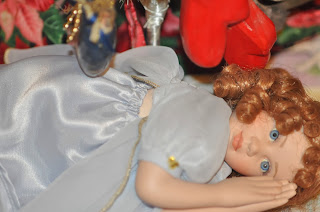 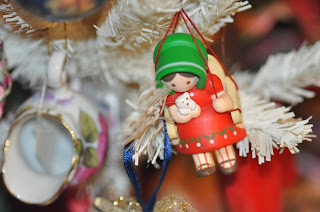 Here is my old doll ornament I got one year for Christmas growing up.  Still have her.  Thinking of old Christmas ornaments, we had some fabric horses with the candy canes attached.  I believe I had the twenty year old candy cane.  I think one year I finally tried to eat it and let's say it was the chewiest thing and I'm sure the brunt of it got thrown right out.  It had to be stale as well. 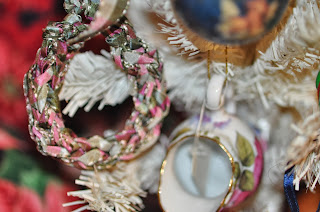 I tried an i cord ornament probably last year.  Was intended for a bracelet and it ended up too small for that, so be it an ornament.

My daughter pulled a clock ornament off their tree to show me and I remembered it from my growing up years.  A few years ago, I decided to let my kids have most of my old ornaments for their tree.

It looks nice.  My ex's girlfriend has decked out the rooms with some very nice Christmas decorations.  The pretty white and red garlands wrapped above the curtains looks nice.  I had to laugh though, seeing a row of Nutcrackers on the living room windowsill.  The last few times, I've had fun going to the house and I joked to my girls and just went up to the Nutcrackers and went boom, boom boom across the row of Nutcrackers pretending to hit something (OH NUTS!!!)  ha ha ha.  I'm sure it went over the girls heads and they didn't get it!!!  Ha ha ha!!!!

My Dad has the one Nutcracker on the hutch in his living room.  My Mom had one of those decorations.  And who can forget the ceramic tree with all the little lights that you can yank out!  We used to play with that thing all the time.

My Dad had out the old windmill Christmas decoration with the two people at the bottom.  It used those skinny little candles to make the windmill go.  I always used to worry it would catch the house on fire.  Thinking of this, I used to be blocked in on the other side of the kitchen table when my Mom would have a candle going on our table.  As a kid, I used to also worry the tablecloth would catch on fire.

My pumpkin pie is gone and now I'm thinking that I should at some point make some cookies to bring to my kids.  Which means there should be some gluten free ones too, as my Downs child can't eat the wheat products.  Or he may just like a big pack of Reeses peanut butter cups!!!

I've been on an Ebay kick in the last three days getting that pile listed and now I'm playing the waiting game as to what is going to sell and what is not which will be earmarked for Goodwill.  And I did a stupid thing, trying to figure out why my Internet couldn't suddenly connect!!!  Oh, after twenty minutes, I realized it's because I unplugged the cord to the router!!!  Duh!!!

Thinking of Goodwill, I went there two times yesterday.  Once for this cool writing lap desk :(wooden:  I foresee another redo project in the works) and I passed on this pretty box.  Visited my kids and then later on I decided to go back and see if it was still there.  One of those type of photo boxes with the rounded top lid and on it is a pretty fashion picture of a woman and it says Saturday Evening Post!  It was still there and my Dad is going to get lucky with a sports book I found for him.

Just call me the Goodwill Girl!  I love Goodwill as it's like going to a yard sale in the winter time when all the yard sales are done for the season.  And you usually know it's not going to break your bank.

I've got to next start to think about other things I need to do on the Internet.  Oh, sometime soon, I should be getting some of the knitting on my Etsy shop.  I was excited to see that recently someone featured my shop.  That was cool.  I've got to start making myself more a part of that community.

And there's the thing, I've got to next buckle down and finish that first book of the trilogy (or the longer series).  And working on a drawing of Emily Parker and then maybe some thoughts on my book cover.

My mind has been wandering back again to designing scrapbooks and other cool designs.  I've got to just make myself do it.

Yes, I should write for Triond some, but maybe I should focus more on the novels as that may end up bringing me more money results. Both, but I've got to start today or tomorrow by refreshing myself of the first book of The Glorious Money Tree and to finish it.