When to Know to go see Your Doctor

I slept over my kids house last night.  The girls and I were up quite late.  Mollyanne had been making some videos of me.  She was laughing and giggling, so I knew that she had to be zooming in.  The kind of shots you know you don't want to see.  Lovely.

She showed me the video last night, which ended up being quite funny.  Yes, she zoomed in.  And she was trying to get Julia to be in the video and she was hollering that she was in the bathroom.  Mollyanne then went on the say, "Maybe Mom will talk to me.  Hi Mom."
"Hi, Mollyanne."
"Mom, you're boring."
"Blah, blah, blah,"  I said and then I could hear myself laughing.  Then she kept saying,"What do you want?"

She has played that thing all morning.  It's too funny.  Any video that they make are cute.  I told her not to delete it from the memory card as I want it on my computer too.

Well, late last night we were all sleeping.  Mollyanne usually likes to sleep with Daddy and Julia and I sleep on the couch.  Well, late at night I start to feel my stomach get really sore all of a sudden and I feel like puking.  I stayed there for a minute and then made myself get up and go into the bathroom.  No fun.  Usually when your stomach gets like that you know what it means.  We need relief.

Puked and relieved, but then it didn't settle down.  A little later I got up several more times.  And one of the last times I looked and saw lots of blood clumps.

When I woke up this morning, it was still sore for a good part of the morning and I was still seeing blood clumps.

I decided there would be no messing around.  When you see blood, you have got to call your doctor.

He said that it could possibly be polyps or something else.  He wanted me to drink liquids for several hours and if it didn't get better to go to the emergency.  And he mentioned they might want me to have a colonoscopy.

Later in the morning I decided to take a nap on Mollyanne's bed.  I decided to come down after Mollyanne came up and took my small bowl of nuts away from me.  Decided to get up as I wanted my nuts.

The stomach seems to be feeling better now, but I'm still going to go to my doctor tomorrow as I had seen all that blood.

We have to know when to take action and go see our doctors.  Whether there is a problem or not, when in doubt call.  And it's never a silly thing to go to the emergency room if you think you are in terrible pain and something just doesn't feel right.

It ended up being something really minor.  Thank god. 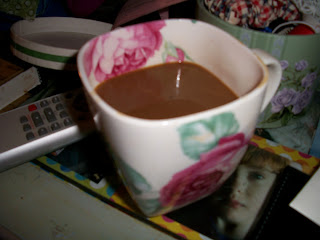 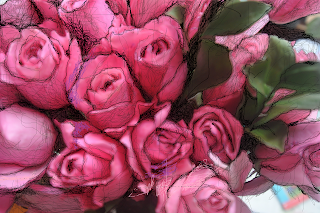 Posted by https://jenniferjofaypaperdolls/blogspot.com at 2:38 PM