Take a Break and Go For a Walk

We don't stop to think about walking or any type of exercise when we are at our computers all day, but it is important to take some breaks and get some sort of exercise each day.

Some of us get stuck into a routine with no exercise and as we get older, it becomes more important to do this.  The effect of the previous holidays and extra eating often cause us to now think of dieting and exercising.

I'm not really one to over eat.  I tend to eat in moderation and my typical three meals a day.  Where my culprits are, are in the canned foods that I add to my pasta or rice.  There are extra salts and carbohydrates in those that we don't stop to think about.  And then another bad habit is snacking on chips.  My downfall.

I love those kettle cooked chips in all flavors and at least crave one bag a week.  Which as I start to get older, I might have to watch my blood pressure if it increases.  But it is often hard not to snack at all.

I don't bake as much as I used to.

But after having four children, I still have a belly and often women have thought I was pregnant.  I'm skinny everywhere else.  It's just the suddenly tremendous stomach.  I'm also on prescribed medicine that makes me gain weight and I'm also on birth control that also makes me gain weight.  And suddenly, they weighed me at the doctors and I was surprised by the weight gain.  It seems like more than when I was pregnant, which as I get older probably isn't a good thing.  But at being in my forties, I don't want a baby at my age so I will have to deal with the weight gain.

I have decided to start walking.  I went on a short walk today from my kids house to the end of the street and back which was a good start.  As I do it more often, I will go on longer walks through the whole neighborhood.  But today with the snow and cold up and back was good.  There is a little hill to walk up on the way back, which is also good.

We don't stop to think as we get older, we need to also think of our hearts and keeping up with some sort of exercise.  Plus walking and any sort of exercise increases our metabolism.

I would half way think of a second walk today, but I'm coming down with a nasty head cold.  But being out in the cold air seems to help un plug things.

Last night, I ended up sleeping on my couch to elevate myself better.  I had the tv on and my cats slept on me.  At a certain point into the night, I partially woke up and heard a woman on the tv say, "I'm from Kansas."  In the back of my brain, I was thinking I'm not from Kansas.  Then I realized that it was an old black and white movie that had started.  I was sleeping through part of it.  At first I thought it was Katherine Hepburn and then I realized it was an actress I didn't know of.  I got watching it.

It was about a woman who met a man and then they parted ways for a little bit.  She became paralyzed and couldn't walk.  So there was another man friend that took her places.  Towards the end, they went to the theater, and then at the end of the movie the other guy and a girl see her.  The woman never stopped loving him of course and didn't want to tell him she couldn't walk.

She goes home.  And then the other guy finds where she is living and pays her a visit.  She's sitting on the couch and he still isn't aware that she can't walk.  At the very end of the conversation, he tells her about the painting that he had done of her with her wearing the shawl that he has just given her tonight.  Then he goes on to say that the gallery owner said a woman bought it and she had been in an accident.
Then suddenly he begins to put the pieces together and puts his stuff down and goes further into the room and he sees his painting hanging on her wall.  So about now, he is realizing it is her.  Happy ending, and you know they end up together.

All those black and white movies end up in a happy ending with the two main characters looking into each other's eyes and confessing their love.

I grew up on so many of those movies.  My Nana used to visit a lot when we were little and she and my mom would watch all the old black and white romance movies.

But back to walking and exercising.  Walking is one of the best exercises you can do and it is free.  You don't have to sign yourself up to a gym to do it.  But if you would like the gym atmosphere, that is a good thing to join.

I had joined a gym a few years ago after my separation.  I went in hopes of meeting someone too, but nothing happened there for that.  But I did enjoy walking on the treadmill and then having a nice hot shower after.

And when you are first starting to walk, don't push yourself too hard.  Work up to where you want to be, or else you will find yourself hurting your shoulder or something.  You should never over do too quickly.

Sit ups are good to do too.

I tried hopping on a bike for the first time in fifteen years last spring.  It took a little bit to get used to and I didn't end up doing it too much.  I probably only used it four or five times.  I think partly, the seat was a little too high.  But it is sitting inside the garage at my kids house waiting for me to attempt it again in the spring time.

There was a bike path out behind a school in the neighboring town.  I tried it there and the path goes for quite a ways.  I will probably try it again sometime.  A bike is fun to have just to take a little bike ride around the neighborhood in the Springtime on a sunny day.  That is when we always see everyone out and about.

People tend to be couped up all winter.  And all of us writers tend to flock to the computer all day writing our hearts out to try to earn our online money.

Take a break and go for a walk, jog or run.  My brother is a runner and is always running all year long.  He finally qualified for the Boston Marathon about five or six years ago.  He has been in that at least two times.
He's come up to do the Burlington VT Marathon a bunch of times. 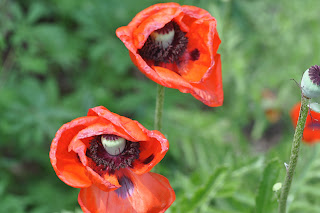 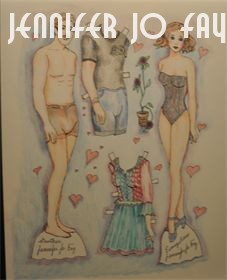 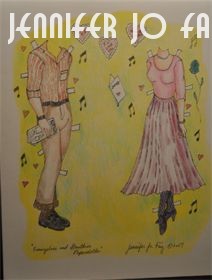 Posted by https://jenniferjofaypaperdolls/blogspot.com at 1:54 PM