I have had a crazy few days and didn't get to NaBlopoMo when I really wanted to. Ebay got me sidetracked and then I listed some free furniture on craigslist.  Well, three of the items got taken and I'm down to getting rid of an armoire that has some missing drawers in the bottom.  Someone could probably fix it and build drawers for it.

Someone came for my bookshelf the first night and he saw my bengal cat.  I told him I needed to get rid of him and one of my other cats.  I have four and my boyfriend has two.  And I have been thinking of getting rid of two of them for a while.  It is hard to get rid of pets.

Well, he immediately said that he knew someone who would want the bengal and he could foster the other cat until he could find a place for him.

So the next day he came to pick them up.  I blocked off three of my rooms so that they would have less places to escape to.  It took us a few minutes to grab my Bengal Biscuit.  Then he went in the guy's crate very easy.  He wanted to put the other one in the same one, but we couldn't find him.  Piper wasn't anywhere to be found.  Finally after looking under the couch for him, I realized he was hiding behind the fridge.

The guy had to come back for him later.  While he was gone I got Piper in my crate and left for the kids house.  When I got back to my house later, he had busted out and was in the kitchen.  I managed to catch him and put him in the crate.  I had to hold the door on him as it was busted.  My daughter later told me that it was broken.

The guy came back and we tried to put him into his crate.  Piper put up a big fight and scratched me really bad and then high tailed it into the kitchen and hid in the cupboard.  I tried to tackle him as he came out and I got scratched some more.  Then he disappeared under the couch.

The guy decided to go to the grocery store for fifteen minutes and get the kitty litter.  While he was gone, I found him under the couch and brought him into the kitchen for some food and into the guy's crate.  He finally was contained.

The guy came back and took him home.
So last night it was just my girl cats and I.  It was a little weird not having all four today, but I will get used to it.

I'm having one of those days today.  Just a little out of sorts.  It only happens once in a while.  Everyone gets days where things maybe don't go as planned and you just have to deal with it and let it slide or roll off.

I had to take a package to the post office today to get it weighed to go to France.  It was going to cost $45.50 so I'm not sure if she will bid on it.  I have to be careful mailing packages out of the country.  I don't want to lose money on shipping costs.

I got surprised by one that went to Spain.  It cost me $43 and she only paid $13.25 shipping.  She got a good deal and I'm chocking it up as a mistake learned.

I have been playing around with some of those Martha Stewart paper punches.  I have one that does a lace pattern and another one that punches out little hearts.  Last night I had some fun cutting out some paper rose petals that I drew on some decorative paper.  I haven't figured out how I am going to glue them together yet.  I just tried pinching one petal to give it a 3-D effect.  It looked neat.
Maybe tonight I will play with it some more.  It could be really pretty when finished.  Paper roses.
Maybe I should spray some perfume on them.

It might be fun to make some petals and write a poem of love on it.  And then add it to a Valentines Day gift.  That is around the corner.  Valentines Day is always lots of fun and this year I get to share it with my boyfriend.

Later I might do some more sketches for the paper dolls.  That is always fun.  I did a bunch of outlines for them.

So how have your new beginnings been going?  I hope really well.

I guess my new beginnings will be life without four cats, which is going to be nice.  I won't have to use up the litter as fast with just two cats.  Cool.

Last night a guy came to look at my couch.  i really didn't have it listed as I am still using it.  When he called I was like suddenly thinking of getting rid of it.  I was thinking that there are wears and tears from my cats, so yes, I could do without it and sit in my rocking chairs

When he came last night it was really funny.  Two big guys come in to get a couch.  He stood there and took one look at it and then said, "The flowers."  The other guy started laughing.

Then I said, "I guess you could get a five six yard man fabric."  I was laughing.  Then the other guy had had enough and left.  Then he was just standing there.

"I can't do the flowers."  It was really funny.  I'm surprised though that he didn't bother to ask me the pattern over the phone.  Moron.  Ha ha.  It really made my day.

Some days are great when something happens that tickles your funny bone.  Sometimes I find myself laughing to myself in the car afterwards.

I'm glad he didn't take the couch as I still use it.  It's nice to be able to lie down with a blanket and watch a movie.  Or fall asleep on a dull one.  And then my cats sleep on the blanket with me.  That way, they don't claw me.

I bought some burb clothes a few days ago to make some little patchwork patterns on sometime.  That could be fun for my kids to have some day and I can keep some at my place to use when my grand kids come over.  That still is far away. 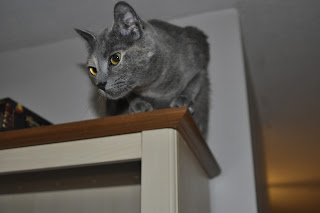 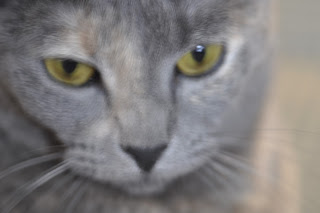 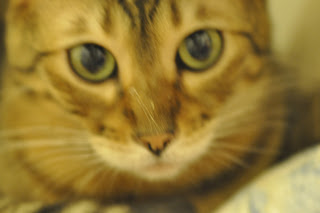 Biscuit was the one on the bottom.  He was a really pretty cat and I will miss him too.  He was a little skittish sometimes.  But he was also a lap cat.
The gray one above is Luna.  She is my siamese cat.  She is really affectionate.  She will give little kisses and reach up for hugs.
I will miss Piper my Egyptian mau.  He was one of those licky cats.  But sometimes when I would be sleeping I would wish that he would stop.  But he was an up close and personal.  Oh well.

I happen to love my two female cats.  The other one, Ella is a siamese tortie point.  I paid less for them, but they happen to be my favorites.  Ella tends to be a jumpy cat, especially in the morning.  She will be walking all over me, as she is probably anxious to get her food.
At least I have lots of pictures of my other cats.

In the beginning I had two bengals and one died after a month.  He had a bad heart.  Then I replaced him with another cat, Ruben, who liked to poop in my tub.  I got rid of him.  And then replaced him later with Piper.

My girls used to love to come over when they were younger to play with the kittens.  They would mix up their food with water and make a little concoction for them.  My ten year old used to get water all over the floor and then I found myself cleaning my floors.

That is what I was also doing in the last few days as the missing furniture is gone and I can get my floors looking better.  That is one of the drawbacks of having cats, is the fur you find everywhere.  Maybe it won't be so bad with less cats. 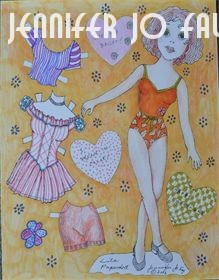 Posted by https://jenniferjofaypaperdolls/blogspot.com at 12:37 PM