How to Grieve for Whitney Houston Without Drugs

I heard it and was thinking, "Did I just hear that right?"  Wow.  I couldn't believe it.  It was like I might have been dreaming and it really wasn't true.

But the fact that I was awake, eyes open, and just listening with my well hearing ears.  Shock pounded in my brain.  Such a beautiful voice, gone.  Why?

They had anounced, found in her bathtub.  Then, I wondered why was she found there?  Then at one point, someone said she was found on her bed.  I got thinking, "Which is it?  Tub or bed?

Later in the morning, it was confirmed that she was found in her bathtub, and that drugs and alchohol played a part.

Of course we wouldn't know the real reason for her death for a little bit longer.

Why was she doing fine so recently, and then the next moment she is dead in her tub hours before the Grammys.

I guess I was blind to the fact that she had been dealing with demons for her addiction to drugs and alchohol for years.  I guess I wasn't even aware that she was married to Bobby Brown and that he probably kick started her addiction.

And I also didn't even know she had a daughter, Bobby Kristina, 18.  And then, I was kind of shocked that she and her mom drank and did drugs together.  What a waste of a life.

Whitney was a great singer and what a terrible shame to get her daughter involved in the drugs and alchohol.  The apple doesn't fall far from the tree I guess.

I also didn't know that her mother, Cissy Houston was a gospel singer.  I began to read the Star Magazines and look at all her younger pictures chronicalling her life.

It will be a very sad day when everyone goes to see Sparkle in August.  It will be lacking the sparkle that Whitney had for the world.

And then there was the news that her daughter had been rushed to the hospital several times.

It's got to be very hard on her and I am sure it was hard for Whitney's mother to have to bury her daughter.  And I didn't realize that Dionne Warwick was her cousin.  It's just got to be a hard thing for the family to have to say good-bye to her.

My cousin had to bury her son this last fall, due to him committing suicide.  He was a marine and he suffered from Post Traumatic Syndrome.  She had to see her son go before her.  Most of us hope to never have to bury a child.  It's a tremendous grief.

And now, from the sounds of it, Bobby Kristina might be sending herself along the same path as her mother.  There are suddenly stories of her getting high and being on drugs to deal with her grief.

Doing drugs and alchohol to drink away the pain, is only a mask and does not help in the grief process and getting closure in your life.

It sounds like the family is really worried about her, and Cissy doesn't want to find herself burying her grandbaby.

For anyone dealing with the death of a loved one, drinking yourself to oblivion and snorting drugs and doing weed will not help you one bit and it will never bring back the dead.

My mother died ten years ago, to colon cancer.  It will be eleven years in June.  Not once did I drink to deal with the loss of her beautiful life.  The whole community, friends and family missed my mother.  She was a community person and she was the one that held the whole family clan together.  When she died, everyone fell apart and it was as if a way of life died with her.

But I never did drugs or drank myself to kingdom come.

Instead, I found other ways to deal with the pain.  I started cutting up her outfits and made a quilt with them.  And I cut squares from her wedding dress that went into it.  I also found a very good way to find my closure.

I wrote lots of poetry about her and wrote down all my thoughts.  I then printed it up and gave it to relatives for Christmas.  My uncle said it was very poignant.

Everyone has their own way of getting closure.  I also needed to have lots of her pictures.  I wanted her things around me.

Some people can't stand the sight of their stuff surrounding them.  It makes them feel the loss all the more.  They need to get rid of it, to release the pain.

When my mother died, I called some of my visiting Aunts and Uncles up to see if they wanted something.  She had this statue of a fisherman that my Uncle always loved, so he came up to get it.  And I had my aunt come up to give her a knitted afaghan that she had made my mother.

And another aunt, who was my mother's cousin, has had a very hard time dealing with death.  She lost her father, and then my mother and more recently lost her husband.  She feels that she can't come back to my mother's home, because the pain is too hard.  She was practically a sister to my mother, they were that close.

Sometime soon, I want to get a little movie made on my pc from all her pictures that I have.  My family will love it and maybe that will finally be the closure that my mom's cousin will need.

It is very hard to say good-bye.  Especially when it is too soon.  When someone has lived a full life, we can somehow deal with it a little better.

My mother was 51 when she died.  She only lived half a life.

And I guess Whitney was only three years shy of 51.  But the difference between Whitney and my mother is that Whitney had a choice.  And she chose death.  She could have gotten herself on the mend.  Get off drugs and smarten up.

And I guess all that people can do is pray that her daughter doesn't follow the path of destruction.  Faded glory, and silenced voices.

If anyone likes paperdolls or knows someone who likes paper dolls, check out my previous post on this blog for my paper dolls for sale.  I also have a post for them for sale on each of my blogs.  I would love some sales. 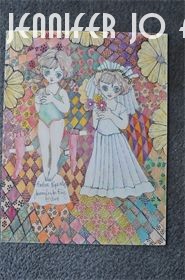 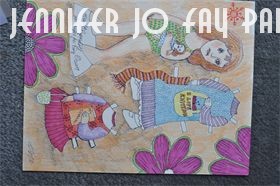 Posted by https://jenniferjofaypaperdolls/blogspot.com at 6:06 PM