Barbara Walters is finally retiring after many, many years of giving us her prime time shows to watch year after year.  She has been an amazing person bringing us these in depth views into the lives of many of the rich and famous and other important people we have followed for decades.

I always remember her best for those prime time shows when she would always get the celebrities being interviewed crying at one point.  It seemed her fortee to get someone to open up about the things that the viewing audience really wanted to know about.

I believe that is what made her prime time specials all the more personal and kept people viewing.  When I was younger, I think her show came on later on in the evening and it ended up being past my bedtime, but I could still hear it being viewed as my mom would be out there watching it, and probably crying as well.  There had to be a box of kleenex nearby I am sure.

Later on, we got to watch with her, and yes, she was crying and then covering up her face when we started to laugh because she was weeping.

Barbara Walters made people all over the world cry and it opened up to the world who these celebrities were realy made of.

Because of her, millions of viewers felt that they could relate with the celebrities, get to know more of who they were, what made them tick.  Because along with us, Barbara wanted to know.  She wanted to make sure she did everything in her power to make her prime time specials a tremendous hit.  And that they were.

I know I never watched them all, but one of the ones I remember was one on Patrick Swayzee, who was one of my Mom's favorite actors.  She even had a poster of him.  And Barbara had my Mom and me in full attention as we learned about his life.

While watching her show, we would learn about the things the celebrities most enjoy when they are not making movies, like Julia Roberts likes to knit as well as many other actresses.  It's a hobby among them as well as all of us.

We find out some celebrities like to write poetry, like Keeanu Reeves and Katie Couric and others have written children's books.
Barbara Walters has definitely kept our interest for many, many years and now this is her time to pursue something new and just as exciting which she would like to do. 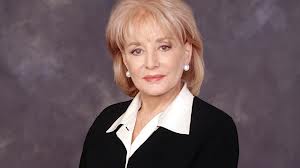 Posted by https://jenniferjofaypaperdolls/blogspot.com at 9:21 AM