On Nadya, check out the blog Real Housewife of Santee.  She wrote a really good post on her..

I bet most likely he would turn it down.  I think he's got to have much better morals than to stoop that low and do that.  Although you never know what he would do to have that money go into the royal bank account.  And he obviously didn't have very good morals to do what he did in Las Vegas.  I'm sure he is realizing that now.

I think what is coming next from Prince Harry is a much needed apology to the world.  True he was having fun and was on his holiday, but he is after all the Prince Harry and third in line to the throne.  He does have royal duties to his country and not to mention his very important duties to the military.

It's been an embarrassment to put it mildly.

But, the majority of us just want to move on and concentrate on new news.  Which will be the reason, I've got pretty much one more post on the different topics around this and then on to other types of posts.

That is until Prince Harry does something else really stupid.

It's unbelievable though how some of these people just go on for weeks or months on end discussing someone and most of us are like, they're still talking about that?  Or someone decides to write a book on him or try something else to cash in on his plight.  People will do all kinds of things to make a buck.

There would be law suits and legal problems.  We already know that the royal palace has told British newspapers and anyone from the UK that if they publish the naked pictures from Las Vegas that they will come after them with lawsuits and legalities.  They don't want Prince Harry tarnished more than he already is.  The want him to redeem himself and to learn from this incident.

Just from what I read about what the film would be about, it sounded like it would be quite the sex romp type of movie.  And talking with my Dad about the incident this evening he thought that Prince Harry seemed to be a raunchy type of guy.  You've got to be to be naked in a room full of girls naked.  That would be my opinion too.

I've got only one more article coming up on Prince Harry as I feel I can only come up with so much to write about the subject.  My next article will be about who should we blame?  Harry or his parents?
So this one should be my last unless if there's some future topic about new things people want to address opinions on. 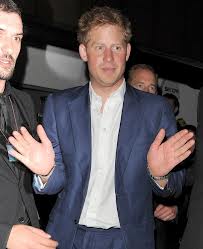