Have you Thought of Writing a Trilogy?

Have you ever thought of writing a trilogy of any sort? Or perhaps you have been inspired by Twilight or some other immortal series and would like to try your hand at it to see if you can attempt to write something of that nature. Is it that you long to write a crime series or a cozy mystery series? Romance sagas of family legacies pulling at your heart strings too?
Why are you waiting? Or maybe you have been in the process of writing one and you are amazed at how far you have gotten so far. Is it that you never thought about how you would go about keeping the story going for three novels?
Look at Stephanie Meyer, J.K. Rowling and others who have mastered this. J.K. Rowling created her own series about Harry Potter and his amazing adventures with Ron and Hermione. She created a world that spanned was it 7 novels? I lost count, but she kept it going for a long time and it is classic.
Stephanie Meyer created her awesome world of Twilight and chronicled it’s love triangle between Bella, Edward and Jacob. I personally loved this series and am a major fan of all the movies and all things Twilight. Of course, many people are on the fence about this one as not everyone is a Twilight fan and it is a little geared towards the teenagers and the women. It’s a love story and lots of men decide to hit and run.

So, if you haven’t started to think about your trilogy, perhaps now is the time to begin to think about it. How would you have it start? You will have to have a major plot that is going to carry you throughout the three books. Which will be an even bigger challenge for you because in writing a trilogy it is more of an effort to keep the reader’s interest the whole way through.
You want them to be left sort of hanging, but interested in buying the other books to see what is going to happen to their well loved characters.

I almost forgot the other trilogy that I absolutely loved reading. The Girl With the Dragon Tattoo series. I couldn’t put those down and had to go straight into reading one after the other. It’s too bad the author died, because he was a good writer.

I didn’t read the Harry Potter series, but did love the movies. And for the Twilight books, I read all of them except for the first one as I had already seen the movie and didn’t want to go back and read the book. I liked the books, but I know of other people that didn’t care for the books or the movies.
I’ve heard mixed feelings that people think Robert Pattinson is a better actor than that of Kristen Stewart. Maybe she does kind of walk her way through it, but I still like her movies. She’s still quite young too with room to grow.

The reason for me writing this is that, I’ve been diligently working on The Glorious Money Tree children’s fantasy I have been writing over the last year (with some procrastination in there too).
Last night, I kind of got thinking that perhaps I could turn my novel into a trilogy. It’s possible that I could make it happen.

It’s a story about a little girl who hatches a plan to gather coins from all her friends to grow a money tree. It’s for adults too and I could somehow see it as a family movie of some sort or hey, even a trilogy movie possibly. You never know. But first it would have to face the tough reality of breaking into the market as an ebook and to become a hit with the public like 50 Shades of Grey, Harry Potter, and Twilight. But, can it do it?

That is one reason why so many of us are inspired to write a trilogy, with the thought of a movie series in some distant unknown future. The other reason why we write trilogies is because when we start writing a novel that we love and we come to know our characters, connect with them and feel what they are going through as we write it, we come to love them and we don’t want it to stop.  Actually ever, but we do have to decide when it is done and we have to delve into a new project.

My story is about Sally and her friends believing in all the magic of fairies, goblins, etc.. and everyone in the story remembers their stories of their childhood and believing in them too. As they tell the stories, all of it connects and you discover this magical world that they all have created or perhaps it was there and they secretly never stopped believing. They just grew up, but they didn’t forget.

At first, I was thinking that the second novel should go back to when Sally’s Gramma was a little girl and believed in them. And then the third one was going to be about Sally’s mother when she was a little girl.

It’s going to sort of go like this. In book one miracles will probably happen, or at least I hope. In the second book, there will be more obstacles for Sally and her friends to overcome and things will of course change some. And in the last book, Sally and her friends are going to have to grow up and face the harsh world and it will be up to them to decide whether or not they want to hold onto the magic of childhood.

So, I will of course be up for a challenge, as I have never written a trilogy before. But I would like to try. Someday, I might also be inspired to try my hand at a vampire novel, but that is light years down the road as all my other previous projects should come first.
If you haven’t yet thought of your trilogy, but would like to attempt to do so, try it now. There’s no time like the present. 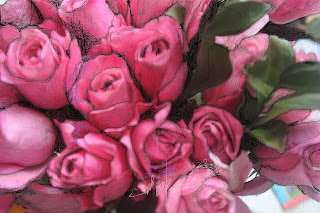 Posted by https://jenniferjofaypaperdolls/blogspot.com at 5:53 AM