We all know that Kris Jenner has been the queen of exploitation of her girls for a long time and they have come to love it.  All her girls don't care that they have gotten to where they are because of Mom whoring them out to the public.  Making them look like sluts.

Not to really say they are sluts, because the majority of the world knows that they aren't.  If they were big time sluts, they would be whoring the streets.  But it is very true that they have been whored into the limelight of fashion and fame at an early age.

I have never had the privilege to watch Keeping Up with the Kardashians.  I think I've seen little bits and pieces of previews of the show though.  I'm really not a big fan of all these reality shows.

I mean, we also have Kate Gosselin and her eight (am I right?) kids and her failed marriage to Jon.  Then her show came to a halt, I think it was last year and recently she has been worried about what she is going to do next to support her kids.  And she's kind of glad they are now having some private time away from the limelight.

That's probably what the Kardashians needed, but they don't care.  All they care about is making money, coming out with new perfume and clothing lines and any other business venture they can think of.  I must admit, they are all excellent entrepreneurs.  No, they aren't sluts but fashion seems to be at the top of their list.

If Kim can't wear fur, then it probably makes her feel as if she's missing something.  But it wasn't right for that woman to throw a bag of flour on her for wearing fur.  She does have a right to her choice.

But between the Kardashians and the Gosselins and other stars who have exploited their kids, they aren't the biggest ones.

I think the biggest ones that make this world reduced to junk is these pageant moms exploiting their little girls.

Just look at the new Here Comes Honey Boo Boo reality show.  I think it's aired a few times and there's of course more to come.  Absolutely sickening.  Here's this obese mother, June exploiting her daughter, letting her drink her Go Go juice a combination of Red Bull and Mountain Dew and letting her prance and dance in front of the judges, letting her shout it all out on her reality show that really shouldn't be aired to exploit a little child.  Alana is her real name, but she goes by Honey Boo Boo.

And of course there has been Toddlers & Tiaras that is also a terrible display of exploitation of little girls.  They just shouldn't be aired on national television like that.  It's okay if you want to enter them in a pageant but please keep it out of the public eye.  And don't use your little girl to get national fame.

Look at the other mother who dressed her daughter as Pretty Woman.  Come on.  She's not a whore on the street, she's a six year old and shouldn't dress that way.  It may appear cute, but not really.

Just put them in a pretty dress with their makeup and hair all fixed up and let them sing, dance and do anything else.

But please don't push them into it if they don't want it and do not feed them Go Go juice to make them all wired.

Seems like every time I turn around Anderson Cooper has one of them on his show and the controversial topic gets discussed and people in the audience simply are not amused.

Just let them grow up like a normal child and go to a regular school without all their peers saying, "Here Comes Honey Boo Boo the Go Go drinker whore child."

I think Kris Jenner is recently feeling not so much jealous that this new Here Comes Honey Boo Boo reality show might be getting more ratings than her show.  I think she along with the rest of us just is probably thinking that it's not okay to exploit a little child like that.

You've got to figure that yes, Kris Jenner did exploit hers too, but I don't think she did at at such an early age as these pageant moms.  Kendall and Kylie are in their teens and are models and are old enough to make their own decisions.  Kim, Chloe and Kourtney are all adults who can also make up their own minds.  With the help of Mom.

But Kris Jenner is still a good mom.  I think she has some really good values and would do anything for her children and her grandchildren.  She would take the shirt off her back for them.  We get that, because we know we would all do that for our children too.

In a way, I would be interested in reading her book that she published last year.  It would be a good read.  Right now I've got three books I am reading at my own pace.  Tina Fey's Bossypants which is really good.  I can just picture her talking as I am reading it.  There's some really funny parts in it.

The second one is a newer biography about the secret life of Marilyn Monroe.  I downloaded one of the ebooks on her as I wanted to read about her childhood and how her mother had lots of problems.  It's kind of interesting.  I didn't realize that it stemmed from her grandmother and her grandfather too and it ran in the family.  I never really knew about the private life of Marilyn Monroe and to this day I have never seen any of her movies until recently when I watched My Week With Marilyn and realized that she had a troubled life.

And of course the third is 50 Shades of Grey.  I'm only into the second chapter so far.  I'm not captured yet.  I've heard mixed thoughts on it.  I've heard lots of my FB friends who love it and others that think she's not a very good writer and are surprised that she got lucky.

I had someone give me a compliment on my The Glorious Money Tree story that it has the makings of the same starts as 50 Shades of Grey only better.  That was really nice to receive that one, but I will not knock on wood.  But, sure it would be nice to see my novel take off like that one.  One really never knows until we go to publish.

But back to this controversy, it just isn't a good thing.  And isn't it funny that I am writing this today as Anderson Cooper is going to have this pageant mom controversy on his show today to talk about this new reality show and the exploitation of little girls.

Yes, we are looking at tomorrow's STRIPPERS!!!!! 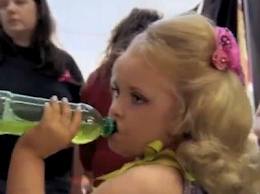 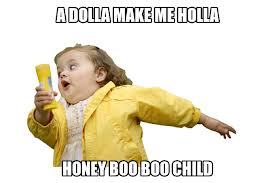 What a way to teach your little girl that it's alright to exploit yourself for a buck!  Money don't make me holla to every put my child in that position.  Sure one of mine would like to be a singer, but it's going to be all her choice if that's what she wants later on down the road.  I would never exploit my children. 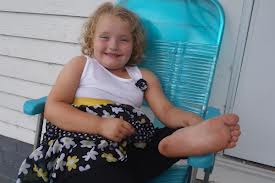 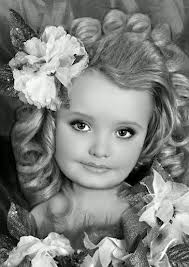 I will admit, she is a really pretty little girl, even though she's been forced into this lifestyle she's in.  It's too bad really.  Don't you think she should just have a normal childhood?  This could possibly scar her. 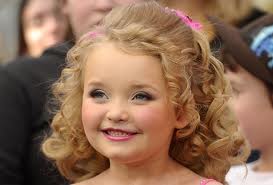 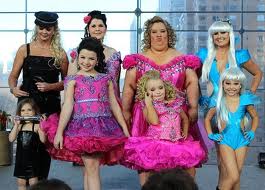 This is disgusting.  The two in the middle don't look bad, but not the appropriate costumes for the other two.  Especially the blue outfit. 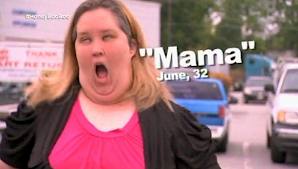 It's not so much the children I blame but June, the mother.  If you want my point of view, I think she should be working on losing all her weight instead of exploiting her child.  She looks quite terrible if you ask me.  I'm not judging all obese women.  I think the majority of obese women look great and many can't help that they are bigger.  We should grace all sizes.  It's the combination of her obesity and her exploitation of her child that I'm just saying she should work on bettering herself instead forcing her child into this disgusting limelight.  It just makes her look worse. 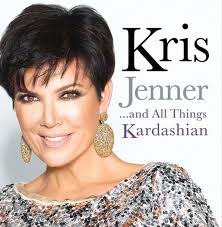 We all know she is guilty of exploiting her children too, but she has done it on a classier level and some of it is okay.  But they aren't saints either.  Look at Kim's wedding that pretty much seemed like a sham.  They have that to deal with and her divorce and Kris's divorce gets talked about in her book.  They have also done things in the public eye that we have all frowned upon too.  But her children are pretty much all grown up so that makes it different and somewhat okay. 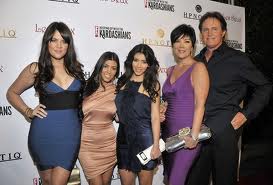 Posted by https://jenniferjofaypaperdolls/blogspot.com at 9:50 AM