What do you think about People Rewriting Fables?

What do you think of People rewriting fables?  I'm really not a fan.  I don't know.

The reason I am writing this is because over the last few days when I have been writing at one of the writing communities, I've been reading more than several different articles that were posted on The Spider and The Fly.  Well, we all know and love the original written by Mary Botham Howitt back in 1834 and in 2003 Tony DiTerlizzi was honored the Caldecott Honor Book for his illustrations to go along with the story, for which I'm sure he gave her credit for it.

Well, as I got reading, some of these other articles they seemed to all be the same in which they stuck to the original moral of the story.  Their wording was different, but still it was the same original story that I've already heard before.  It was still the classic story about the spider and the fly and how the fly was lured into the trap.  Nothing changed there.

I really didn't care for any of them even though they were worded differently.  Don't kill my classic favorite fable.  I think by wording it differently they seem to believe they can call it their own.  I don't know, maybe they can.  I still think it does them a disservice to have something very similiar to a classic fable.  I would so much rather read something from them that wasn't a knockoff of something else.  Just saying, and I have a right to my opinion here and at any writing site.  If they don't like it, they can lump it.

It wasn't plagiarism they were doing, but in my mind they were still kind of copying the original fable.  What do you think?  I mean the moral doesn't change and they stick to the same idea as the original.

But should you rewrite a fable? If you want to rewrite a fable, I think you have to take it and make it really different.  What if the fly had to learn a different moral?  And the spider decided it wanted to go talk to children?

What if Cinderella decided to smoke pot and be a stripper?  What if Snow White decided that she was going to jump down the well?  What if Alice in Wonderland decided to climb a ladder and go up into Cloud 9 instead.

People have to learn to create their own fables.  Choose your own moral or stick to the same moral, but create your own storyline.

People all over the world seem to enjoy taking something from somewhere and then decide to rewrite it in their own way.  Make it different and your own.  Don't have the same beginning, middle and ending as the other one.

Say you want to write about Medusa and she turns people to stone.  What if she had shark heads on her head instead of snakes?  Or what if she decided to turn someone into bronze or silver instead of stone?  Or turn them to a tree?

You cannot repeat all the history and the things that have already been done in the world.  It's your job to write it in your own way and come up with something totally new and original to you.

These people really didn't plagiarize, but it was kind of like copying which still doesn't sit right with me.

And they honestly can't say I'm slandering them.  There's no names here.  I'm just stating that I was reading some articles on The Spider and the Fly being rewritten.  I think I have a right to talk and express my opinion about something that I kind of don't think is right.

We know and love all the original fables and not these newly rewritten ones that are very similiar.  If you are going to rewrite one, the whole thing needs to be changed.  And I think it should also be a different moral and different characters.  Like say, if you like the moral from the spider and the fly, make it the lion and the bunny.  And don't have it the same.

And speaking of slander, what about Octomom?  Are we all guilty of slandering her?  Many of us have been writing about her?  Does she have a right to come after all of us and sue us?  I don't think so.

So the few writers who chose to rewrite Spider and the Fly also have no right to come after me and sue me for slandering either.  I have a right to express my opinion just like everyone else.

Just think, if everyone decided to come after everyone for slander, we would probably be having everyone and the kitchen sink being sued for slander.  Think about it.  It would mean that none of us would have a right to express our opinion about anything.

I've decided to wait a few days before I publish something new at Triond as they are taking their sweet old time to publish quite a bunch of peoples different articles and I told Triond that I won't submit anything new until they can show me that they are going to publish the 3-4 that are pending.  If they want to keep profiting from us, they are going to have to learn to keep up the pace and let us submit and publish a whole lot quicker than waiting over a day or so or more to see our writings published.  They were publishing our writings within a matter of minutes.  I think they must be having some glitches. 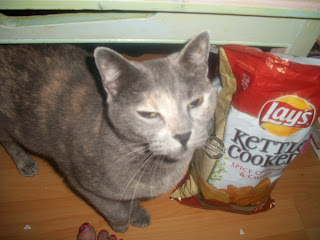 Looks like this cat isn't amused by all the junk out there.

Posted by https://jenniferjofaypaperdolls/blogspot.com at 9:12 AM