Live in the Moment and Get Things Done

Don't get me wrong, I think we have to have some sort of schedule, but I guess we should just go with the flow and do things as we feel it needs to be done.  There's always that brain in our head that just automatically tells us to do it.

And if we ended up not doing something, was it really important in the first place?  Like say, my handmade rag dolls.  Not to say I will ever finish one to completion.  I still have them and haven't thrown it out, but I guess they aren't my priority right now.  I still have the pattern and all the muslin fabric to make them at a later date if I want and I can always draw out a new doll face on them and finish at my leisure.  Even if I only finish one, that will be fine.

I'm holding onto the materials regardless, but it's not on my plate at the moment.

I took this last weekend to just quietly take a short break from writing.  I think I took a little time to knit up my headbands and take some notes online and do some research.

Earlier this week, I was able to get some of my notes typed up and I got my outline for The Glorious Money Tree trilogy typed up too.  Next I will need to get some ink for the printer so I can print my research notes and the outline for novel.

I think I posted a little here and at Triond, but didn't really post more often until today.  I think I was at a loss for ideas.  It happens.

Yesterday, I took a good deal of time to figure out my hard drive.  I had all my photo files backed up to a hard drive last year while my laptop was being fixed.  I had missing photos.  I finally plugged it into the laptop yesterday and found it all there.  All my missing photographs were there.

The only ones that were completely gone was the ones I took for someone's barmitzpha that I photographed and I had used my daughter's laptop for it last year.  Her laptop broke too and the photos on hers got lost.

I've got a few stories about that:  Correct me if I already posted them in a previous post.

The other story was that my Grammy and her sisters grew up in Durham Maine.  Some of their family were teachers.  There was a story once about one of them expressing their concern for a story one of the children had written.  One of the teachers said, "Oh, that's just little Stevie King."

He grew up in Durham and lived nearby where my Grammy grew up.  This was told to me at my Aunt Harriet's camp after they got talking about me and the eerie dolls and they would sometimes compare me to Steven King for the fun of it.  Another aunt would say, "Oh, the dolls." when I would bring up drawing or photographing the dolls.

Today, I have posted about five articles or perhaps one more and this is the second one here today.  One there I might post here is a bunch of sayings and quotes I had written down in a book over the years and I decided to share them all in a post.  They are all classics by famous people.  Don't we all love to read them for great words to live by.

It's so important to be inspired.

Well, I will end this and consider myself done for today for posting.  I should try to write the next few chapters of The Glorious Money Tree and get it moving along some more.

I just felt like knitting for a little bit too.  I'm waiting for my application to at least one of the craft shows.  They are both in November.  I want to at least do one of them and am opting for my girls school craft show.  The fee is cheaper than the other one, plus when I go there, I am bound to see a whole bunch of the moms I know.  Both would be fun.

And tomorrow night is Volleyball game night at my local church.  I haven't been since I was dating one way street and I'm missing everyone.  It will be fun.  There's either a bunch of card games or the volleyball where we all miss the ball of course.  I think one time I had to crawl under the bleachers to find it.

And of course there's always a meal with lots of desserts.  Everyone usually brings a dish.  I'm bringing just my body and the small charge for the meal this time and once I get their flyer I will see what they want us to bring for next time.

I usually have seen one of the girls as she always has a yardsale and I shop at her sale and we chit chat. 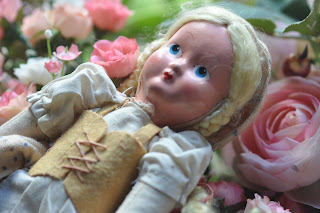 Posted by https://jenniferjofaypaperdolls/blogspot.com at 12:32 PM