Have Your Kids be part of your novel writing

I mean, you definitely don't want to include them in your writing process if it is in fact a novel for adults, a romance or a murder mystery or any other novel genre that is definitely geared for adults and not for kids.

But if it is a book that could be designed for kids, then by all means have them be a part of it.  Like if you are writing a children's book that comes with illustrations and is an easy reader or a picture book, let them be really involved in the process.

I'm finding that with my Glorious Money Tree trilogy, it is the perfect book to share with my children and see what they come up with for ideas.  Of course a lot of the written words would go above their heads and is definitely geared to adults and young adults but the theme of the novel can also be for younger kids.  Not the really little ones, but perhaps the ones that are at the Harry Potter age group and up.

My girls have been listening to me tell them what is happening with the good and bad fairies and the goblins and other magical creatures.  Mollyanne wants me to have a little boy for Sally's friend, Heather to like and she wants his name to be Christian.  She wanted the boy that Sally likes to be Christian but I told her, no he's already Ronny and Ronny fits.

Mollyanne has been playing Free Realms and has been showing me scenes from that and has been asking if I would write about some of it in my book.  And in one part of the novel, Sally gets read one of those Rainbow Magic books so I asked one of the girls which one her mother should read her and they told me a few of the ones that they like.

So just off and on, we would talk about different parts of the story, so they know what it is about.  Both of my girls are kind of writing their own little stories.  Julia has been busy making her own little cartoon, which is cute and one morning she was lying down on the neighbor's driveway with her feet crossed while we were waiting for the bus to come and she was busy working on her cartoon.  Classic.  It would have been a cute picture, if I had it with me and could manage to catch her off guard.

Julia has been writing a Littlest Pet Shop story in one of her notebooks.

They liked it this weekend, as I went shopping with some friends (pretty much window shopping for me) and I ended up buying a few of those fifty cent notebooks one for me and one for each of the girls.  They always love a new notebook to write or draw in.  And I got sucked into a cool gemstone bracelet, soda lite.  It's not my birthstone, but it was pretty but it says to promote wisdom.

Now, I don't take big stock in all this stuff, but hey if it could send any extra wisdom my way, I'll take it.  Ha ha.

I've been doing a lot of research though this weekend on different things for either The Glorious Money Tree or any future writings.  The meanings of flowers, phases of the moon and meanings, meanings behind our eye colors (didn't even know there was such a thing), meanings of gemstones, fairy tales, gods and goddesses, witchcraft, spells, etc.....shapes of faces, hair colors, character traits and anything that could help with writing novels.

I don't really believe in all the meanings behind things and it really would not apply to every single person.  I know some people rely on all that very heavily, but I usually just think that it happens to be sheer chance that it fits what a person is going through.  Same with horoscopes, in the fact that it could fit and yet at the same time it could not or just be coincidence.  I don't know.

The reason for taking notes on this though could be maybe not so much for The Glorious Money Tree trilogy but perhaps for a future novel, I could have characters who could want to believe in this stuff or want to do witches spells and get heavy into tarot cards.  Who knows.

I've also started a reference guide of my own note taking that I am typing up to have on hand for any kind of writing.  I plan to print up the pages as I get them done so I can have the guide right handy at any time.

And the other one I thought of having on hand is a writing prompt guidebook from my note taking.  Any phrase of words that catches my fancy, it's written down and later I can just have it handy too.

I went through all the Chapters of The Glorious Money Tree and finished writing up my outline so I can have it handy.  It seemed like it took a good three hours to do this as I went back in and added stuff and began fixing things that needed fixing.

Like the biggest boo boo was ha ha Sally's mother, Lara's husband, I've been calling him Patrick for a while in recent chapters.  As I went back and fixed more things, I noticed that I had originally called him Brent.  Whoa.... can't have that.  I did have a good laugh with my ex about it and he said he could have an alias.  But better not to.

And then, I wanted to write a little more early on about Sally liking Ronny Caster, the stinky sock boy.  So there could also be some little love stories going on through out the trilogy and of course as they get older it could get more involved.  Maybe a love triangle of some sort could be interesting to delve into too.

Just things to think about.  Well, this will probably be it for today.  Jake's bus is almost ready to arrive and I'm thinking I should just spend time getting all my reference notes and the novel outline typed up so I can print it up tomorrow.

And I decided to have a quiet day yesterday just spending time to knit up the cabled headbands too.  One is done and I just have to sew it together and the other is halfway done.  The second one I made up my own lace edging on the sides of the cable and it's looking pretty.  I'm going to have to take some pictures and write my pattern up later, for a possible future knitting book, but that one would be probably more like two or three years down the road maybe.  The other ones come first.

And then I have the Ebay selling that is going well and I just happen to have my priorities where I want them and I'm happy. 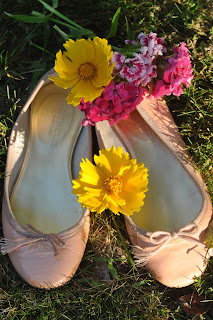 This was a pair of ballet shoes I bought at a yard sale earlier this spring.  I think I may search for more at next years sales.  I could envision some photos with a bunch of them hanging on a clothesline.

Posted by https://jenniferjofaypaperdolls/blogspot.com at 12:18 PM