This is a poem that I wrote in college and about seven years ago it sparked my first novel, Lustful Evangelean. The novel took me two years to complete, have a local editor to edit it, (she loved the story within the story, but it still needed lots of work), I edited it more, shoved it away for a long time, a few years ago came back and did more editing. I think when I get other projects done, I will go back and edit in a new light one last time and later publish it as an ebook with Kindle Publishing.
It was a combination of this poem and a neighbor's son who was writing a children's book at the time and wanted me to do the illustrations for it. I was excited about my artwork being in his published book and at the same time while I was on the phone with him, I thought, hey, I could write a novel. So, I guess you can say that is how my novel writing got started.  Needless to say, the illustration gig was a wash and I'm not sure if he ever published his book.  I do have him to thank though for inspiring me into perhaps my true calling.

So here is the poem.  At the time, I was inspired by the Pre-Raphaelite paintings.  Loved Ophelia in particular.  I was heavily into writing Gothic poems, and doing anything Gothic in my artwork.  I strived for bizarre and shocking in the artwork and ended up with a lovingly done piece of art instead.

Lustful Evangelean (originally named Evangeline but I realized the pronunciation was different so I changed it.)

On a whim, I, clad in my calico print nightgown,
slipped into the density of darkness.
A darkness which stretched so far beyond the silent meadows.
The air contained a dampness that sank its moisture into
my orchid purple garment and through to my skin.
My bare feet beat slowly upon the bumpy, tar road
that turned sharply around the bend.
Crickets passionately sang their song of romantic monotony
of the night, while moths fluttered furiously past me.
A row of small, gnarly trees were rooted in a nearby field.
It was a playground for deer.  I felt a strange frenzied feeling
rush over my mind.  Dead branches extended upwards and
tangled and twisted, bringing an image of Snow White
caught in treacherous vines and branches, in a prickly, dark
forest.  Her black eyes, were wide with fear and her red cape
was caught on a jagged branch.  Quickly, I walked away
while glancing at the horizon.
A quite solitary farmhouse was in the far distance of another
field of orchard trees and the long dirt driveway was a vast
path to home and hearth.
The white stars were decorations printed on
a black blanket of nothingness.
I stopped in my tracks, letting the short lace ends of my gown sway
while violent winds travelled thoughtlessly around me, whirling, twirling
and doing a little dance.
Near a barbed wire fence, I caught sight of some exotic white flowers
that were illuminated by a misty light.
I reached to grasp them, but panicked by the sound of nearby footsteps.
Quickly, I hiked up my garment, jumped over the fence, and hid behind
a tree.  The bark was coarse to the touch.
My blue eyes were scanning the scene for an unknown presence that
threatened my existence and clawed at my fast beating, blood red heart.
Between the crevices of tree bark, a bright green caterpillar shimmied to
its destination.
Wet grass stems stuck between my toes and irritated me.
Shadows from the trees on the opposite side of the road
created a Gothic setting.
Weary eyes stared into the distance for something tangible.
Suddenly a shrill voice echoed through the dead silence, calling for Evangelean.
It was my name.
I revealed myself to the man with black hair and his dark, brooding eyes
held me captive.
Gauthier dashed over the fence and approached me.
His rough hands grasped mine, and dramatically pulled me against him.
Cool air rushed over my bare breasts,
as he whispered my name.
Now confusion entered my mind.
Far away, my faithful husband slept
while this darkly seductive stranger has captivated my soul.
Please make time stop before it's too late for undoing!
Strands of grass brushed against my face as the man
pressed his body against me.  Time passed all too quickly.
Guilt shadowed my mind as I buttoned my bodice.
The man's lips twitched.  His eyes were deep, hollow pits.
I was startled as his hand grasped my arm fiercely as
something terrible was hidden deep within.
I tried to wrench myself free, but he shook me violently.
A clutching hand tried to grasp my neck,
which would be fragile in his sinister clutches.
With renewed horror, I trembled, kicked him where it counts,
and ran into the darker woods.
The path disappeared and turned into
thick moss and dead leaves.
Piercing through the air was a bullet to wound me in the heart.
A bed of moss awaited me as I made my tragic exit.

Jennifer Jo Fay
Copyrighted 1988
From about 1988-1989 in my second and third years of college I wrote this Gothic style poetry.
Before that, I had been writing poetry from late junior high and all through high school.
And off and on would write poetry, but never novels.
Early junior high years I was known for writing stories.
Then I think I probably didn't pick up the poetry until I was married in 1993 and I wrote poetry often while concentrating on photography and my artwork and later paper dolls.
In 2001 after my Mom passed away to cancer, that is when I went heavily back into poetry and wrote lots of poems about my Mom and my roots.  I think around the holidays that year I had compiled a book of poems that I gave to some of my family and friends.  People really missed her terribly.  She was only 54. 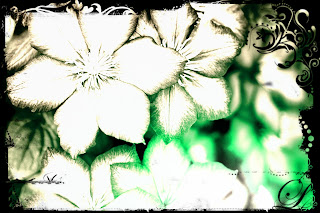 This is another one of my flower photos I edited on BeFunky.com    This one kind of fits the poem, hopefully.
Posted by https://jenniferjofaypaperdolls/blogspot.com at 5:02 AM