Now you try and see what you can come up with. 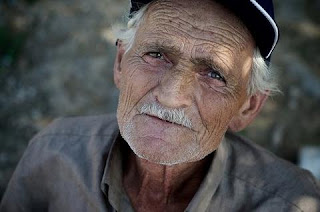 He looked up to the heavens searching for the eyes of God and asked for forgiveness. He was a good man, but did somethings that he had regretted doing and wanted to cleanse himself of his wrongs so he could live amongst the angels who wanted to caress his soul.

He looked up to the heavens searching for the eyes of God and asked for forgiveness. He was a good man, but did somethings that he had regretted doing and wanted to cleanse himself of his wrongs so he could live amongst the angels who wanted to caress his soul.

It was a warm day and he could clearly see the glorious rays shining down on him.  It felt so good and he just wanted to linger in the simple joys of this beautiful world that he had lived in for so long.  He wanted to reach out and grasp them and pull them into his heart.

How was it he thought that he wasn't supposed to look into the sun for fear of hurting his eyes, yet at the same time it held a tremendous power for him all his life.  The sun had held all the good things that he wanted to take with him to the skies.  His children, his family and all that held special meaning in his life.

He was an honest hard working man, never spent more than he had to, saved all his money, didn't believe in credit cards and all this modern technology.  He just didn't grow up in the age of the Internet.  He lived during a time where things cost ten cents, fifteen and fifty cents.

He was the one who sat on the park bench and watched the world pass by.  He observed and listened, gave his two cents when needed.

Yet, on this day when the sun was shining and there was a gentle breeze that gathered around him, he was asking or rather searching for God to ask for his forgiveness.  There was something that had never been said, but he really couldn't go back in time to fix it.  And he wouldn't want to change a thing, however, he always wondered what would have happened had he done things a little differently.

The first thing he had felt so bad about was on one day, many years ago, he had a fight with his brother, Terrance.  It was a nasty one about something Terrance had done and he hadn't approved of it.  Terrance had gone and invested some money in something that he didn't think he should have done and their fight caused a rift.

It was during the Depression or shortly before and Terrance had invested money and then the Depression hit.  Well, after the fact that he was so broke and in a tremendous amount of stress due to the Depression, Terrance decided to take his life and jump from his fourth story apartment.

The old man always wished that he had said sorry for yelling at his brother and to this day had wished for him back.  So today he was asking God for forgiveness for his mean words.  He didn't really mean it.

The second thing he wanted forgiveness for was for not answering all the letters that his first love of his life, Bertha had sent to him.  He had gone to Germany to serve in the war and before he had left, he had caught her spending some time with another man and got jealous.  So he threw himself into the war and vowed to never see or hear from her again.

Well, Bertha was so upset that she had gotten caught.  And she didn't really mean to get caught up with the other guy.  Over the year that the old man that she really loved had left, she wrote him all these letters asking for his forgiveness and he would be the only man she would ever really love.

He kept the letters, but never decided to reply back.  He was the type to hold a grudge and just wanted to move on as his heart had been broken.

And as he looked up to the sky, he wanted forgiveness to not responding to her efforts.

He ended up marrying a lovely woman, Marcia, but she was different from Bertha.  It never meant that he didn't love her as much, because he really did grow to love Marcia and they ended up having three lovely children and ten grandchildren.

He had a good life, living on a farm, working hard to harvest his crops, taking care of the horses, chickens, hens and roosters.  His was a labor of love as he watched his wife tend to the lambs, spin her wool and knit her lovely sweaters.  She had made one for him that he wore so much every winter and it reminded of her.

He loved the smell of her on his skin and wished that he could have her near him once more.  She had died a few years ago of old age.  It was just her time.

Now, he wanted to go to her, yet he wanted to be forgiven for what he did to Terrance and Bertha.  He didn't want to stay in limbo between Heaven and Hell.

So, his weary eyes looked up to embrace his God and as he looked, somehow, he felt that an angel came down to him and said, "As long as you can recognize that you have learned from your mistakes, that is all that matters.  When you are ready to come to us, your special dwelling is waiting for you.  It is beautiful with everything that you have loved your whole life at your fingertips.  You can replay any moment at any given time.  It's got all that you ever thought about with the answers to all of your questions.  And when you come to stay in our eternity, the afterlife, you will see what your destiny was all about, why you chose your vessel and the reasons that everything ever existed in your life.  When you come, you are home and you will have the most divine wings to possess as they are yours to follow your loved ones to let them know that your spirit is with them."

The old man smiled and closed his eyes for a moment in time.  He was happy.  That's all he ever wanted to be.

He walked over to his porch and sat on his bench and watched the birds fly by.  Very soon he knew he was going to be able to fly like them as he knew his time was almost up.


Posted by https://jenniferjofaypaperdolls/blogspot.com at 6:58 AM