My boyfriend and I are camping this week with his family.  We are back at his house for tonight and are heading back to spend the rest of the weekend there.  It has been fun and relaxing.  I've been having some time to work on my knitting.  That is something that is easily done there.  I even can knit well in the dark as long as there is some light.  I finished two headbands and a few of the bangle bracelets.

There were two little kids that kept coming around and talking to us, so later today I had whipped up a few bangle bracelets and gave the little girl the smaller one.  They were really good kids. They were adopted.  It wasn't until this weekend that I had heard the term, "fresh air kids."

I had never heard of that term.  Then later the kids were talking and I asked them if they were going to toast marshmallows.  They got talking about smores so I told them how my daughter tried to microwave them to make her homemade smores.  I didn't think nothing about that as my daughter tried it and I told the kids they would need their mother to help them with that one.

Even when I went to school there wasn't a lot of ethnic race around where I grew up.  But we were told by our mother not to stare and make a big deal about it.

And now that I am a mother, it's everywhere.  My kids best friends in school are different colors.  It's all around us and in the mainstream.  And who really cares what color skin you are.  I don't care.  I'm not prejudiced.

So after I gave her the colored bracelet, I told the dad that his wife can wash it and it will felt and I was asking the kids if they're having a fun summer and I told them my kids were having fun too.  The little boy asked where my kids were, so I said they're camping with their dad this week.


And I am a very hands on mother who is always with her children.  He will have to learn what type of mother I am and he will need to let me mother them like I always have.

So, back to camping tomorrow and I am sure when we get there, there will be kids all over the place.

I definitely do well with kids.  I always have.  It's just a great thing to interact with them.  I love adults too, but kids are awesome.  Kids just tell you like it is and they are very inquisitive.  Some adults just have a special knack for kids and others don't know how to deal with them.

Then, it was me that was suddenly having four kids and learning how to raise them and be an effective parent but also their best friend that my sister once said, "Who would have figured that it would be you that would end up having four children."

And then my sister had three.

Everyone is raised different and wants to bring up a child different ways.  I had my way that worked for me. And as my mother used to say, "What's right for one family may not be right for another.  There is no right or wrong way to raise a child." 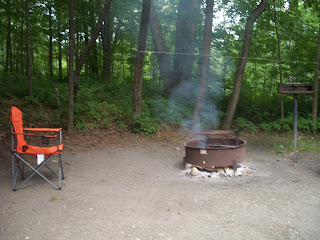 There's nothing like a good fire.  Of course this one just looks like smoke but got rip roaring later.  It was nice to just sit by the fire either at our campsite or across the way to his son's campsite.  I've got to find a good marshmallow stick tomorrow when we get back to the campground.  If I can toast at least three marshmallows, I will be a happy camper.

And today we were just sitting at our campsite together in the sunny section and I was knitting.  I looked over and my boyfriend was asleep in his chair.  It was funny.  But it was just nice knitting with him quietly sitting next to me.  Just the quiet moments are nice too. 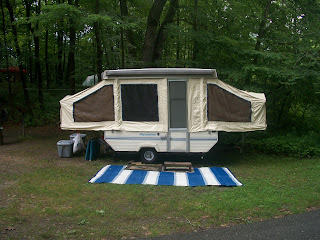 We tried to jaunt out last night to see the fireworks but they got cancelled due to a thunderstorm and then we had to face all the traffic.  Then riding back, it was coming down so hard.  My boyfriend was worried about wires falling down.  Then I said, "Aren't we safe in the car with four rubber wheels?"  He said but the roof is metal.  I never thought of that.  And then at one point we couldn't even see in front of us.
We finally made it back to the campground and it had died down, so we ended up staying. 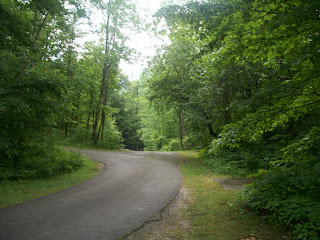 I brought my smaller Kodak Camera also for this trip and I've been liking some of the landscape shots I can get with it.  My macro is on the bigger one, so it gets a different effect.  I can see myself playing around with some of these shots on those photo editing sites.  Maybe some cool filters. 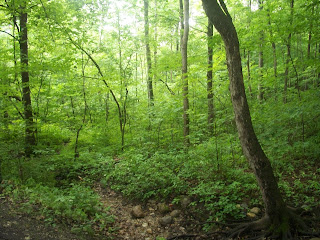 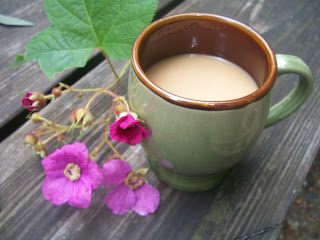 Food and coffee!!!!  We forgot to bring the coffee cups back to the camp so this morning we did without coffee.  We won't go without for the rest of the weekend.  And I think I am going to go buy some bug repellent before we get back.  Last night the mosquitoes were eating me alive.  Drove me nuts.  I'm glad one of my cabled headbands is done as I think I will wear it at night to keep the mosquitoes buzzing in my ears. 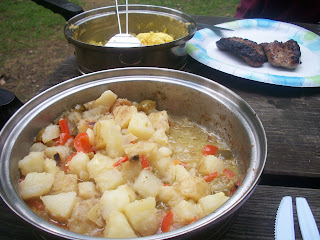 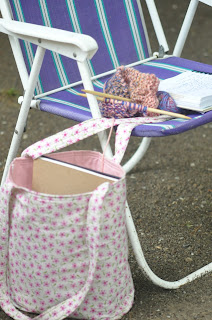 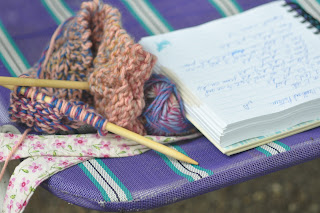 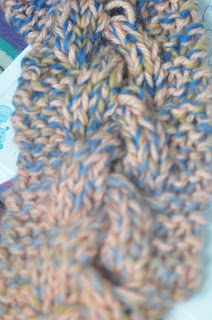 One headband knitted up really quick as it was with bulky yarn. 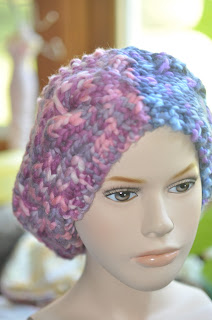 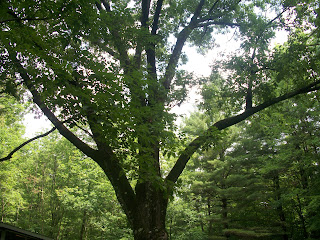 I took more pictures today.  One was of tin foiled corn on the cob on the smoke pit.  My boyfriend's daughter in law soaked the corn on the cob in water for two days and then they cooked it today.  It took about two hours or longer for it to be ready.  It was really good.

Both of our campsites have a nice amount of privacy.  From their campsite it is all woods with a trail to walk on.  Nice and private.  Maybe tomorrow I will go investigate the trail with my cameras.  Tonight we watched some chipmunks and a squirrel fighting for some breadcrumbs.  My boyfriend started feeding them and I laughed and said, "Don't feed the animals!"  And then he kept moving his chair and the smoke kept following him and then we all laughed and said to be careful you don't fall into the ditch.

We're having a good time.  His family is very nice and laid back, which is good as that is how I am.  I'm very laid back, easy going with a happy disposition.  My mother was the same way and so was my Nana.

Tomorrow, I think I will take some time to write another chapter to The Glorious Money Tree fiction novel.  I'm up to chapter eight here on the blog, and have hand written chapter nine.  Should work on chapter ten.

I've got the Live Scribe Smart Pen coming but it didn't arrive in time for the trip.  I think I am going to love it.  It will be great for when I go home at night and don't want to bring home the lap top.  And it seems like I would save a step instead of handwriting my chapters and then typing them out.  I can just upload my writing and it's already typed.  I will see if it works for me.

I do know that sometimes I tend to just start typing up my  handwritten stuff and editing and really changing things around as I go.


Posted by https://jenniferjofaypaperdolls/blogspot.com at 7:15 PM