Once again I've been watching my favorite morning shows.  And I was quite appalled when I heard that they plan to take away his titles dating way back to 1980.

Now, I never heard of such a thing.  You mean to tell me that they can take away something dating back over 20 years ago.  Talk about an Indian giver!

True, it does sound like he was taking the what did they call it enhancements or steroids? i heard what he was taking this morning and since forgot exactly what it was.   It sounds like he is definitely guilty of that and he shouldn't deny that he did it.  There's been reports from fellow competitors that lots of people saw him take them.  Which means that if they saw him do it, he did it.  People wouldn't lie on the camera about something like that.  Maybe he didn't deny it, as I haven't been following the story all along.

If they saw him do it, then of course he did.

But it seems as if that's not the point.  Lance has said that he just wants it to be over as he is most likely fed up with the whole situation.  You've got to figure that all that just takes a toll on a person's personal life whether you are famous or not.  Nobody likes to be hounded by the press, put through courtroom battles and all the other unnecessary details that come with it.  He's tired and he wants to be done.

Okay, so they are telling him that he can't enter anymore races and other competitions.  That seems a little harsh.  Everyone makes mistakes and it seems like a tough punishment to tell him he can never participate again.

On a smaller level, last year I got banned from writing on Hub pages as I was blogging and I didn't know it and you couldn't blog on the site, so I got moderated and got banned and can't go back to the site ever again.  It's too bad as that was one of the best writing sites to earn money.  So on a smaller scale, that was my punishment.  It didn't seem fair as when I signed up they never sent me the rules and guidelines and people make mistakes.

Now, back to Lance, he made a mistake and now he is paying for it on a bigger scale.  It is now costing him his career and now what does he do?  There's always other options and I'm sure Lance will bounce back and find something new and perhaps just as rewarding.

But I will say this, that if they do decide to take away his titles nobody can ever tell him that he didn't win any of those races.  The whole world and everyone viewing knows for a FACT that he won all those races.  And nobody can ever take that away from Lance Armstrong.  He is still a big role model for everyone and a great athlete.

When you win something and you know you one, nobody can take it away from you.  Perhaps they think they have the right to take the title away, but they can't change the fact that you won.

Look at these models that get their title away from them, because the judges or someone feels they have a right to dig into their past and pull out some dirty provocative photographs or something along that nature.

I mean if I were rich and famous, I wouldn't want someone pulling out a naked picture of me!  Even now, I wouldn't ever want anyone to do that to me ever.  Nobody wants to be plastered all over the world or even all over Face book for that matter.  And we know even regular people get exposed.

For example:  Say some girl privately exposes herself to some guy at any given time whether she knows him or she's doing it online and thinks it's only him watching her.  Well, guess again, because he's probably got some camera and he's video taping her and before you know it she's suddenly plastered online or something and she doesn't know it until someone local that she knows posts it somewhere for her to know and then she's embarrassed that now she's been the victim of something nasty and some asshole has slandered her.  Just lovely!  But there's nothing that any girl could do about it once she's done it and people just have to get past all the bull.

Nobody wants that.  And I am sure Lance Armstrong is fed up with all the crap he's had to deal with.

And if these judges want to take away his titles, personally I think that they should take back just his most recent titles.  They don't have a right to take away every title he has ever won.  There's just no nice reasoning with that.

Lance won and that's that. 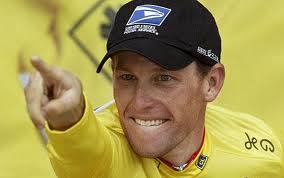 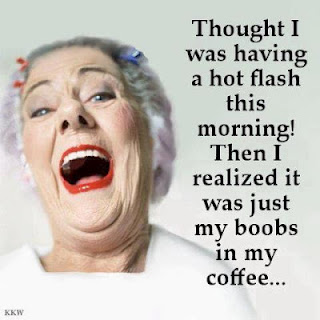 I thought this one was quite funny, and it gave me my first laugh of the day last week when a friend posted it on Face book.  Thinking of this, I'm going to go get myself a cup of coffee and I sure hope my boobs don't fall in!!!!

And I'm still a little too young, 44 to be having hot flashes just yet.  But it's coming all in good time!

Posted by https://jenniferjofaypaperdolls/blogspot.com at 8:08 AM