Writing Fiction and Writing What You Know

I'm going to start an argument here about writing fiction.  Or maybe I'm just taking an existing argument on the phone with my sister onto a writer's issue.  And I also want to let my readers know that in this post I am talking about my fiction writing I've posted on the blog, and not my daily posts.  Most of my daily posts on my blog are non fiction.

Last night, I got talking with my sister on the phone about the short story I wrote about the contest.  So I start out telling her it's about this woman who lives in this cape house and she's a blogger.  Well after saying she was a blogger, my sister gets onto a different subject and starts saying that I am writing about myself.

And here I'm telling her, no, it's fiction.  And she happened to read my first published novel.  And then she's like you wrote about Mom throughout that book.

And all I could tell her was, no I didn't.  First of all the mother hardly enters the book.  The mother and father died in a car crash and left my main character with this nice cape house.  Point A:  My mom died of colon cancer.  #2 my dad is still alive.  #3 They didn't live in a cape house.  And I think she must have read it wrong, because I hardly talked about the mother in the book.  It wasn't about the mother.  It was about this girl who was a stripper and had gotten herself in a heap of mess.

The only way I can relate to the main character is that I spent my money too and got in debt, but I surely wasn't a stripper like my character.  Good god.

And okay, in my short story, the character is a blogger and she knits and sews like me and maybe did a few articles on a missing couple.  But I surely didn't go hunt down a suspect like my character did.  I never went to any lighthouse to find a missing couple and I never wrote in my blog that I was looking for a mail order husband.

So, now it brings me to some things about us fiction writers.

Haven't you ever heard about people telling you to write about what you know?  All these characters in my novels aren't me.  Maybe they do have some similar thoughts and stuff, but they are just a made up character with my voice speaking for them.  And even if some parts really are me, I think the only people who would know it would be my family and people who know me.  Or if someone has read one of my blogs and if I choose to use a snippet from that someone reading could pick up on it if they read it in one of the stories.

We write about what we know because usually it would be more believable because we know what we are talking about.  I'm not about to write about something that I don't know about as I would look dumb because I wouldn't know the first thing to write about and it would come out as looking fake.

I'm thinking that maybe from now on, family shouldn't read my stuff.  At least my sister and brother.  They are too close to me and could cause some unwanted arguments.  At the end of the phone call I told her I was going to teach her some fiction writers 101.

I have this hard thing about most of my main characters when it comes to what their job is going to be.  When most fiction writers create the heroine, we all have to give her a job.  I usually end up having mine either be a writer, artist, crafter, soap maker, blogger, gardener or anything that I have liked doing myself.  I choose to have them be something that I am, because I know all about the subjects and I can make it sound believable, because I know what I'm talking about.

If I chose to have my characters be a doctor, lawyer, secretary or some other kind of person in the workforce, I wouldn't know the first thing about what their life is like.  Unless if I did some research, but even then I could make my characters come off as unbelievable because I wouldn't know what I am talking about.

As it is, I will have to do a little research for The Glorious Money Tree as the mother comes down with breast cancer.  And I don't know about it so I will have to research what her symptoms are going to be, etc....

We write about what we know.  As fiction writers we are allowed to add a little bit from real life in there too without having it end up being about us.

I certainly wouldn't want to follow my characters down a dark alley, or into a creepy lighthouse or an under ground strip club.  Have their parents die in a car crash, or have a sister get killed while riding her bike all due to a person that slept at the wheel.  I wouldn't want to have insane thoughts like some of them.  Think and do crazy things.

And yes, maybe there's a little bit of me in my novels.  Who the hell cares.  At least when I die, my kids can read the novels and say, "Here's mom in here too."

And in this newest short story, the mother committed suicide and swore like a sailor before hand.  My mom never did either one in real life.

And my newest character is a dumb blond and lets in a stranger all because she thinks he's sexy and he could play fireman for her.  I've got brown hair and a woman's intuition.  My character lacks both. 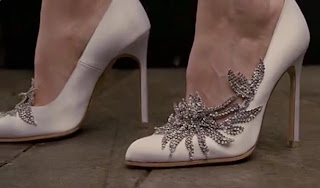 Maybe one of my characters will wear Bella's pumps.
Posted by https://jenniferjofaypaperdolls/blogspot.com at 8:06 AM