If you want your marriage or your long term relationship to be successful and rock solid you will need to learn about compromise.  It really does play a very important role in learning about your mate.

Nobody will tell you that you will have a happy and healthy relationship if you don't practice good compromise.

Have you ever in the past just decided that you wouldn't budge and that you are always the one that is right?  Ever felt like you don't want to commit to his needs?  Or you just don't want to give in and you would rather want to be the one who always gets what you want?

Any couple has to know that you really need to sit down and compromise and do it often to make sure that your marriage grows and prospers into something that is a give and take for each of you.

It just can't be one sided.  Sometimes it can begin that you don't want to give in and you are firm in your beliefs, but then you have to set yourself aside and think, Is it going to hurt this relationship if I don't give in?
Maybe what needs to be done is for both of you to meet half way and agree on certain things.  Don't turn something small into a major fight.

Any time there is a conflict that arises, both parties need to sit down and do some constructive talking about how each of you feels about something.  Don't raise voices, but talk about things rationally with a level head.  Listen to each other, and work out a compromise.  You will feel so much better after you work it out and try to find a good solution that you both are going to agree on.

Fighting and not deciding to think about where your partner is coming from is not going to be good for your relationship.

After all, you do want a happy one.  I'm not guaranteeing you that it is going to be perfect every single day as we all know it won't be.  Everyone knows that all marriages and successful relationships have days when nobody is perfect.

Maybe you got upset that he didn't do the dishes or he left his dirty socks all over the floor.  Or maybe he gets angry with you because you may have lit into him, badgered him or any other little nagging thing that men often don't like.

I think that the older we get, we learn what men and women do not like.  We've come a long way since we were those young teenagers and we know and learn compromise fast.  Not to say that everyone learns.  There are some people that just don't end up gaining that maturity and are forever immature and don't know how to treat a woman.  Or vice versa, a man.

But as adults, we come to learn that we have to keep working at our relationships to make them work.  It's important to work it out.

I just recently purchased Men are from Mars, Women are from Venus.  I haven't begun to read too much yet.  I'm only into the first few pages where he talks about how his wife had a hard day and she just wanted him to hug her and to talk with her.  This I think changed his life.

Sometimes that is all it takes is a hug and to know that your partner wants to show you his/her undivided attention and just always be there for you.

I do know from a quote from the book that John Gray states that in a successful relationship, both partners should win.  How true that is.  An unhealthy relationship is always going to have one partner getting his or her way so much more than the other and that will cause remorse, and unhappiness upon the one who gets the short end of the stick.

Those twigs should be even Steven.  At least for the most part.  Nobody wants to see that one twig be 12 inches long and the other is only one inch.  Goes to show that there will not be much give and take in that one.  And they will be facing divorce or a separation at any given time.

Work at it, listen to each others needs, make an effort to fulfill them and show that you care.  You can use your words as much as you want but the other half is going to be going by what your actions tell them as that is what counts.

If you want your marriage or long term relationship to be successful, you need first of all your commitment of unconditional love, and then you need to compromise with each other each and every day to know exactly what makes each of you tick.

You will always be separate people even though you are  in a successful relationship, but that is what will make it work for you.  You can't make him be exactly like you and he won't be able to make you do all the things he wants you to do.  It doesn't work that way.

You are going to fold your laundry one way, and he's going to load the dishwasher the way he wants to.  Don't tell her that she needs to get her Ebay packages out of the car right this minute because the items are going to fade in the sun.  Trust me, they won't fade in the sun in one day.  And don't tell him that he needs to put the lawn mower in the garage right this minute either.  He probably wants a break to eat a Hungry Man Sandwich.

Celebrate your differences.  You aren't from the same mold. 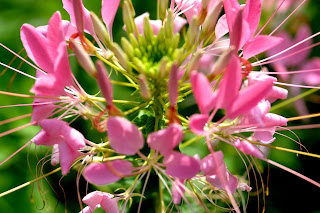 Don't you think that your marriage or relationship needs to be the blossoming flower?
Posted by https://jenniferjofaypaperdolls/blogspot.com at 6:03 AM