Who Will you vote for? Obama, Romney or THE CHAIR?

Good lord, I really don't want to vote for either one, but I feel really bad that I missed out on Clint Eastwood talking to the CHAIR.  That one would have been so fun to see!!!  Right now, I'm checking to see if I can find something online where I can watch the video of that part.  So far, I just found some funny pictures that really got me laughing. 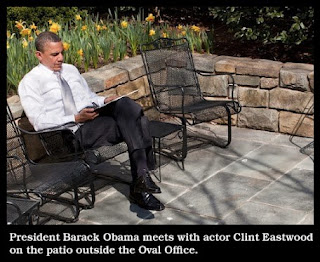 This is the one that really got me laughing.  I guess two can play at that game! 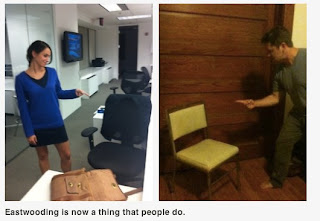 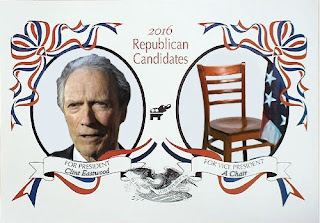 Now who would you vote for?  I'll take a couch!  Where's a couch that I can vote for?  Or how about one of those beds in the middle of a garden?  Now, I would definitely vote for that.  I like wood and all but if an imaginary Obama has been sitting in it, probably not.  No offense, Obama, but I wish I didn't have to vote for either one of you. 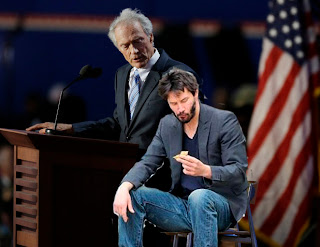 Okay, so Clint Eastwood maybe thought he was being poetic?  That's okay!  He had something to say!  To the Chair.  The Chair got a piece of his mind!  Give him a break, so he talked to a chair. I can think of a good amount of actors who have done stupid things on stage.  There had to be some meaning behind it and I wished I had heard it.  These actors just want you to think about the meaning behind things when they start doing something like that.  There was a reason why he did it.  Oh well.  Maybe now he's laughing about everyone doing the Eastwooding thing now.  Maybe I should start talking to a chair tomorrow.  Just saying.  At least nobody would be near me to hear what I was saying.  Now the whole world knows that he likes talking to chairs.  Hey, my sister used to talk to her pencils.  She didn't want to admit it, but I was sitting in my bed next to her's listening to her do it.  ha ha.  We shared a small bedroom when we were growing up.  And also as I recall, word got around school that she talked to her pencils.  I don't know how that happened. 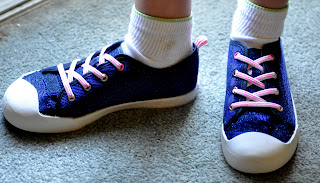 My daughter in her new blue school shoes.  She most likely won't be president some day.  Right now she wants to be an artist like me and who knows maybe a writer too.  But someday, some little kid in shoes perhaps like this might end up being your future president and right now, we have to support someone for the sake of our future and our children.  Aren't they our most prized accomplishment in life?  Nothing else really matters in this world if we don't have our children, friends and family to love.  You know something that makes this life worthwhile?  After all, I do believe that is the only thing that we end up taking with us.  We take our memories of them with us when we die, all the things we loved and believed in come with us.  The material things get left behind, but this is what we are remembered for, the things we stood up for, the things that mattered the most to us.

And someday, they do come back to us because they know that we have built a special dwelling for them in a beautiful place called Heaven.  Where the angels live and use their creativity to make it absolutely wonderful for us.  And they really do live with us, in our hearts, in our minds and in our memories.  My mom is one of them.

But, right now, while we are living, we do have to pick one of them.  It's either going to be Obama or Romney.  Most of us probably don't want to vote for either one and really wish that we could vote for the chair.  Or could we just vote on ice cream so we can sit in a CHAIR and eat it?  I choose mint chocolate chip.

It's important that we choose one of them, thinking of the future, change, good things for the world and most of all for the children.  Let's all think of making a future that is going to be a really positive thing for them.

It's the simple fact that we're all getting older and it's really not about us anymore.  It's about them.  And someday it's going to be about their kids.  It's important that we think about leaving some legacies for them.  Something for them to hold onto.  Things that they are going to be proud of us for.  All our accomplishments, the things that we strive for are going to be an influence for them.  Make it a positive one.  After all the most important thing we can do as parents, as relatives, family and friends and as a community is to try our very best to make the world a better place for them.  That should be our most important priority in life, to raise our children to be all that they can be.

And after that, we should make sure that we are happy too and do the things that we love to do and not to let anyone get in the way of our dreams, hopes and goals.  Don't ever let anyone stop you or your children from reaching for the moon.  If they try we should make it possible for them to see it happen if they want it bad enough.  Hard work, blood, sweat and tears makes everything the way it is.

If we don't try our best, sit back and just not do a thing about it, do you think our children will?


Posted by https://jenniferjofaypaperdolls/blogspot.com at 2:24 PM