Why it is So Important to Broaden our Writing Topics

I think this is so important that we don't get stuck in a rut and just find ourselves writing about one topic.  True, maybe we do have our special niche that we are recognized for, but should that limit what we choose to discuss in each post?

No, it should not.  The well rounded writer will tell you that you need to expand your horizons and not just stay in your moment of writing about say childcare or gardening.  I think to be a writer of many colorful cloaks we need to be about to write just about everything under the sun.  Because this is where we reside.

We do not live in a glass jar as if we were Bubble Boy.  As I recall, I think he wanted out.  Nobody wants to be contained.  That is the freedom of our voice, to use it and use it well.

I guess if I was to write about only one thing, I would be writing on just my novels and nothing else.  But I think I give back more to the novels that I write when I learn how to write about other things.  You never really know when an article that you write is going to end up in a novel.

A story can surface from any thing that we write.  It's good to save everything that you write as you never know when you will want to come back to it.  Document everything and put a date on it.  I used to not date my writings or my artwork sometimes when the children were younger and I would come back to it and couldn't remember when I did it.

I think when you are a writer trying to earn money online, we now know that we have to have an abundance of different topics to write about as you never know which article or post is going to get readers to your blog.  Everyone that searches online is looking for different articles, products and websites that are going to help them out and it's our job to help them find it and us at the same time.

After all, we want more traffic to our blogs and if we write about just one thing, we will only get the ones that want to read about that one thing.  And my goal is to get lots of different readers and to ultimately someday have a very successful blog.

I don't really care if it makes me loads of money, but it would be very lovely to have it become successful, popular and to have everyone be reading it and leaving with good thoughts and inspirations of their own.

So, I got thinking that her life is definitely not boring.  If she really thought about it and wanted to take a stab at it, even my sister or brother, they could all come up with plenty to write about.  No body's life is boring.  We only think that it is.

But, I will take boring and mundane any day over all the drama, heart break and all the other crap.  Been there, done that.  And even got in some trouble for slapping my ex once or twice in the face after he battered me.  In my mind, he deserved it but because I slapped him a second time, I got in some trouble for it.  I guess I was a fan of watching all those movies where the woman gives the man a good slap in the face for hurting her.  Anyway it was in the past and wasn't fun to go through, but it's long been done and there it will stay.

But we really like our lives to be a little more boring which is based on STRESS FREE ENVIRONMENT!  I think I can honestly speak for most people on this one.

I love being able to write about a wide variety of topics.  It really expands my knowledge of different things.  Which also brings me to the fact that we all need to constantly be reading, be inspired and search for new things that make us want to write our perspective on it.

Like yesterday and today I've been pumping out lots of articles on Triond too.  I'm jfay1995 there.  I decided to write one today on the upcoming Halloween season.  I'm sure I will be writing some on it here too.  Or the new Pay pal option coming to a store near you.  Making our kids try on their outfits.  Why we should be looking at the free stuff on Craigslist.  News stories that inspire us to write about them.

And of course many other topics to choose to write about.  And then you never know when one of these topics could inspire us to write about in a new novel.

Even Tarot cards.  I picked up a tarot card set this weekend at a yard sale.  It comes in a big box with the book and a purple satin cloth.  I got skimming through the book and thought it sounded interesting.  I don't know much about Tarot.  I listed it on Ebay and someone has bid on it but only wants the cards to save on the shipping cost, which is fine by me as I kind of wanted to read the book.

And as I got thinking about it and did a tiny research on Tarot cards, I thought that it could potentially be some future novel I might want to delve into writing.

Which now brings me to research.  When we want to write about something new and exciting, we need to know a little bit about it.  We want to come across as well educated in what we are talking about even if we didn't know much about it before.

I'm starting to keep a notebook of all my research.  A good deal of it is handwritten, but later I think I am going to type it all up in a detailed research file so that any time I want to come back to it, I will be able to have it handy to refer to.

Like with writing my first mystery novel, Black Roses, I had to do some research on crime and murder to know what I was talking about.  They couldn't just pick up all the evidence without wearing some type of gloves or leave a footprint not photographed, measured and all the nine yards they need to do when investigating.  I've also got one of those dummies books for that that I should refer to when I am ready to write some more in my sequel to Black Roses, Red Ribbons.

Red Ribbons is going to be about young mothers getting murdered, which of course hits home and nobody wants to see a young mother killed, but there's someone killing them and let's just say that jealousy plays a good motive.

Maybe I should start posting chapters to that one here too.  I'm up to I think 150 or more pages handwritten and half of it is typed.

But anyway, today I've been doing a little research on some of the fruits that are good for us and that will probably be one of the next articles I write at Triond later today.  I normally don't write about that kind of thing, but why not?

It's good for all of us to branch out for a little bit.  And you never know who is reading your posts and articles on your blog.  Who knows when someone may approach you about something that they might like you to write about and it's good to be a well rounded writer for this reason too.  After all, if someone were to offer you a nice little job from your hard writing efforts, wouldn't you take them up on it?

Anything is worth a try.  Which brings to mind:  OPEN DOOR. 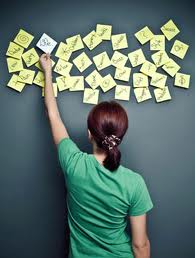 Are there all these imaginary post its in our minds?  Yes, there are. 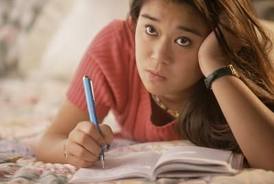 Maybe she's experiencing writer's block like the rest of us?  These are all from Google images except for my two Tarot Card photos at the bottom. 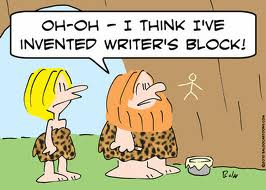 I thought this one was cute.

Okay, now we all could probably come up with a post about this one, seeing as it's going to be knocking on our doors next month. 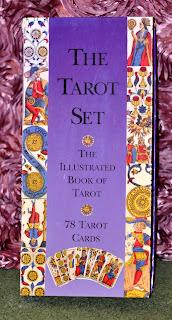 The tarot card set I am selling on Ebay.  I wasn't overly crazy on the cards.  But the book kind of fascinated me.  My ex has one of the really old sets: Oswald Wirth I think.  We played with them once or twice when we were either dating or first married.

And once when I was in my Woman Writing for a Change class, our instructor brought in her Tarot cards with an elaborate cloth that we set them down on and we all did a writing prompt about the set of cards that we picked.  Not knowing much about it, I guess I wasn't too sure what to write about.  The others in the class were older and seemed to know a lot more about the Tarot cards than I did.  I think my instructor was a very spiritual person.  She would also play music for every class and we would sit on pillows and cool chairs and to begin the class she would have us pass a stone around and we would each maybe say our names and something that we wanted to say that evening and the stone would pass around to each of us.  And at the end of the class we would pass a glass candle around without saying anything and at the end of the class our instructor would be the one to blow it out each week.  This might be a later post that I will be inspired to write about the importance of joining a writing group. 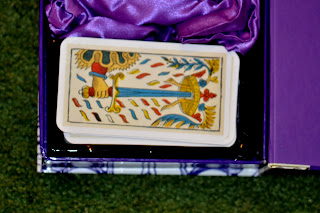 I have ordered a cool gothic Tarot card set with book that will be interesting.  I'm even thinking of some photography ideas for it for some future posts.  And maybe I can get myself into the mode of a future character for a novel.  Food for thoughts.


Posted by https://jenniferjofaypaperdolls/blogspot.com at 8:26 AM