Fun Things to Get us all in Halloween Mode!!!

Here we are into the last day of September and seeing as it will tomorrow be the WITCHING MONTH, I guess now it's time for us all to prepare for it.

I always love Halloween, love the idea of dressing up, figuring out what to be each year, and how to decorate the porch.  Each year I ask the kids what they want to be.

For three years in a row when Mollyanne was little, she was Alice in Wonderland.  By the second or third year the ends of her costume looked like she was a ragged girl instead.

Jake has been Spiderman three years in a row, and when my ex and I heard he wanted to be it once again, we both said, "No, something else."  So maybe this year he will be Batman or another super hero.  My ex usually brings him trick or treating and I'm with the girls and Sean goes off on his own.  All in the kids neighborhood, but at our own pace.  Jake usually decides he is done quicker than the rest of them.

A few days ago, I discovered my ex has already getting prepared for Halloween as he had a cute prop that you push the button that makes noise and there's an image of a ghost inside that appears.  And later on I noticed another fun prop he had.

He was in the dining room at the laptop and I came into the kitchen to bring some dishes in and the kids food trash wrappers.  As I was at the sink, I heard his voice talking but it was kind of thrown across the dining room and I was wondering what I was hearing.  He has a prop that you can record the voices or sounds into and when someone gets within range it goes off.  It was too funny.

I told him it would be fun to have Julia shriek into it.

So, this morning I watched the kids while he headed out to Goodwill to get some outfits for his life size dummy.  My ex has always gotten into the spirit of decking out the porch for the big night.  Same with me.  I think it is lots of fun.

We've always dressed up for the kids.  One year my ex was the Phantom of the Opera dude, another year he was a wrestler (now some pictures of that one were funny).  One year (not Halloween) we found my Mom's old wig from the old days and we all had fun wearing it while in Maine visiting.  This was when I was married to him still of course and we had really good and fun times.  Fun times now too, but as friends.  Anyway, I've got this classic picture of him wearing Mom's wig and he is holding a dish filled with a stack of pancakes.  Too funny.  I have all the pictures as I think it's important for the kids to someday have them.  My ex will always be in my life because he is the father of my children and I am very thankful that he was able to give me them.  They are my greatest accomplishment.

Let's see what I remember I was.  One year I was a exhausted housewife with old curlers and bobby pins in my hair and sticky notes on my housecoat saying, Go see doctor, etc...   another year I had a black cape that I have worn a lot for this.  One year, I had awesome cat's eye glasses, which a girl broke into my car and stole my pocketbook and she got my fancy cat glasses along with it.  And she made use of my debit card very quickly.  I luckily got that fixed since that year, I've always made it a point to have my car door locked everywhere I go.

Last year, I was a cracked doll.  Now that one was funny.  I was of course wearing the cape again with some elaborate skirts and fancy costume jewelry.  And I was in the kids bathroom painting my face, with dark lipstick, blush and a tinge of white.  Then I was drawing black cracks all over it.  Well, Sean my oldest was coming back from the pantry with his snacks to go down into the cellar with his friends.  He takes one look at me and probably died from embarassment and I thought it was hilarious!

Well, today I think I am getting into the season and am going to prepare.  I have ordered a few black roses, a gothic doll that can hang from the porch, and my black gothic angel wings that will be part of my costume.

I'm going to be a Fallen Gothic Angel this year.  Should be fun.  Plus I am thinking I can get some cool pictures of my girls with the wings too.  And the roses and the gothic doll prop could be great for my photography too and someday some illustrations.  The gothic doll is a fabric body with the plastic head and hands, black hair and her face is sort of beautiful with red blood stained eyes and dark red lips.

I'm looking at some of those floating eyes too thinking they could be cool in a fish bowl with some food coloring.  There's also some cool labels out there for witches spells etc... that you can attach to a jar or something and then put things inside.  I'm thinking I could make my own labels.  I saved a small glass jar that had saffron spice in it and I'm going to create some Drink Me labels to attach to it.

Last year, I made some chocolate perfume which I'm going to bring over as a potion to set on the table and let the women know what it is so that they can try some if they want.  Fun.

I've got a black journal that I am going to design two pages that will be open with some spells and drips of blood on it.

I love watching that first Halloween movie.  What a classic!  70's slasher movies are awesome.  I do love horror ones just as much as I love watching the old classics.  I really love all kinds of different movies.

He also has this cloaked skeleton that he hangs on the porch each year and in it's hand it holds a red rose.  It's really cool.  I should see if I can dig out one of my digital pictures of that to have on another post as we swing into season.

What do you want to be for Halloween?

Who wants to be Bella Swan this year? 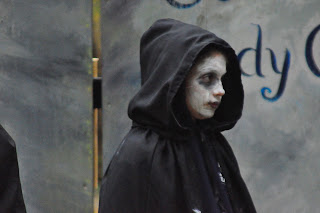 This one was in the Haunted Forest last year.  I took my girls to it and this was one of the characters dressed up for part of the play event.

Posted by https://jenniferjofaypaperdolls/blogspot.com at 9:28 AM