When Your Novel takes a surprise twist you weren't expecting to write.

Isn't it funny when we are writing our novels and something unexpected happens while we are writing?  I think it's great.  Of course it seems that all the time, there are surprises that happen as we type upon a blank page.

I personally think it is great when we are just winging it and going with the flow of what our mind wants to put out there.  It's simply amazing.  Sometimes we do seem to know exactly what we want to write, have a well thought out plan and then we trip upon our paved path and something happens we totally were not planning on.

I think this happened to me in my Glorious Money Tree novel trilogy yesterday.  I was writing up a scene with a bunch of the children in it and something unexpected kind of turned up.  There was a particular character that came into the scene whom I wasn't planning on being there and suddenly as my fingers typed it, there the character turned up.  It's a character whom I was thinking would at some point change through the course of the trilogy and I ended up deciding to have the character play an important role in this particular scene.  It turned out quite well and I am pleased.  Of course at this point, the character of course hasn't changed yet.  That will probably still happen in a later book.

In fact, I think all the characters need to change at one point in the trilogy, seeing as that's a given.

Then, earlier this week, I started thinking about how many characters I have in the novel.  Where it is a fantasy, I was kind of surprised that there are quite a lot.  But, then it is a trilogy and a fantasy which sometimes allows for more.  If you look at Harry Potter, there were lots of characters.  Of course in any novel, there are the main characters, the players and then there are the minor characters too that also play an important role.

I did tally up my characters and have decided that I shouldn't add more at least for this first novel.  Let's just say, it is a good amount.  Ha ha.  I guess I haven't quite pushed the forty to fifty button yet.  But then, I'm looking at my human characters, the kids, the adults, and then all the magical characters.

I am now up to 123 pages.  I'm hoping I can get some more accomplished with it later today.

I've got a pizza date this afternoon with someone and I haven't decided if there will be a third date after.  But I can already taste that pizza!  I'm just enjoying coffee dates and chats at this point and am in no hurry to push the envelope.  Friends first is a really good plan!

Well, this last weekend without my kids, I had another movie weekend.  I bet I popped in about ten movies on Saturday and Sunday at least.  I watched Frida with Salma Hayek portraying Frida Kahlo.  That was really good.  I like watching biography movies sometimes.  More Alfred Hitchcock movies of course.  The Lady Vanishes.  There were definitely some corny scenes in that one!  A sign of the times of when it was made.

Times have sure changed from when the word Gay used to mean happy.  Their train of thought was so different back then.

Last night, I watched one of my Christmas movie treats.  Shadow of a Doubt another Alfred Hitchcock one. That was good!  I wanted to watch it to see what MacDonald Carey's acting was like way back when.  I always remembered him as Tom Horton from Days of Our Lives.  My favorite soap opera.

I met my ex husband's new girlfriend, her little girl and their dogs on Friday and had a really nice time.  It's good for my girls to have a new playmate.  It's all good.  I think she will be a nice new friend for me too.  And I'm already excited to take some pictures of one of her dogs.  Or both, but one I really want to take some cool pictures of.  She's a pretty pale yellow dog, called Lola.

Her little girl was so excited to see my girls and of course they got all wound up.

I was also doing a lot of knitting over the weekend.  I think when I am minus the internet, I tend to do more knitting.  I was knitting up some belts for my nieces and daughters.  And working more on my green lacy shawl.

The belts are simple:

double pointed needles of your choice of size

Knit row.
Don't turn and just slide to the other end and knit again.

A really simple one that doesn't involve the mind!!!!  ha ha.

I've got to work on my nieces legwarmers next.  I'm not sure if I will get them out in time for Christmas but will try.  They want gray.  I went to a local yarn shop and am going to add a touch of blue and some pretty ribbon yarn at the top.

Today, I am whipping up a quicky boucle wool skinny scarf with the same belt pattern.  I'm almost done already as the skein is almost gone!  Maybe I will have it done before my pizza date!

Onto my second cup of coffee.  I got bummed when my can of whipped cream was gone!  Darn it, no cinnamon on top of whip cream!  Time for another trip to the grocery store.

I finished practically all my Christmas shopping yesterday except for the one who wants cold hard cash!  Next to wrap.

And then to think of what I'm planning to bake!  I'm thinking of at least one batch of biscotti, maybe some toffee (small batch), and there's been a request from my daughter for pumpkin pie.  And I am thinking of cheesecake too.  Of course I don't want to overdose on all the baking as I have done in the past as very often it all ends up being there for just me to eat!  And then I'm looking at some of it for the whole next month. 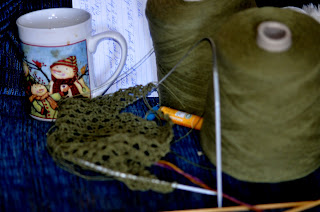 The shawl.  It's bigger than this now.   Double stranded. 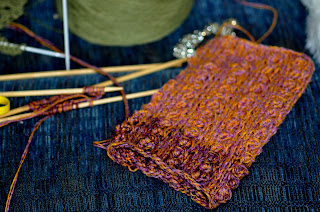 My wrist warmers.  These are done!  And they fit my feet too!! 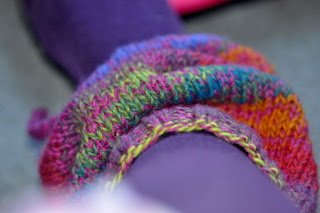 My first legwarmers.  This pair is quite warm, but my future pairs need to be skinnier.  Definitely less stitches.  This pair was 64 sts worked in the round.

For me next time around, I am thinking 40-44 stitches.


Posted by https://jenniferjofaypaperdolls/blogspot.com at 6:44 AM