Winter Wonderland is Here to Stay

Now we are definitely in a winter wonderland for sure.  The worst part was trudging through it.  I got up a little later this morning, got ready and went out to scrape off the car.  No boots, and this is when I cringed and wished I had some.  My shoes have been wet today, and tomorrow, I will be switching to a different shoe.  A vinyl one that won't get as wet.

At least it is the fluffy pretty snow.  I would rather dust off the car with it just flying off the car.  It's no fun scraping the hardened icy snow off the car.

However, today there was already a good amount and my legs of course were covered.  And finally with a cleaned off car, I headed over to the kids house for the day.  When I got there, my ex husband was shoveling the driveway and after a few minutes I drove in no problem.

Talking about messy roads today though.  But I will say that once I was inside and warmed up, the snow was so beautiful falling down all day.

And it's probably still snowing.  And I got back to a really messy parking lot as nobody plowed.  I'm remembering one blizzard we had last year and I was determined to get out and make it over to my kids house for the day.  I think that day we must have easily had a foot or more of snow early in the morning and it was the heavy stuff.  I had taken a shovel and finally after a while, I got out and was on my way.  I almost thought I was still not going to get out.

Today, was fun.  I worked a little on a pretty ruffle scarf for little Brooklyn.  Checked my listings on Ebay and just have to play the waiting game there, just like playing the waiting game with getting these criminal neighbors out.  Another neighbor told me it isn't going to be until the end of January.  Which at least warns me and I may try to find elsewhere to sleep for that last weekend.  Or actually during the week, which means I will be there.

I got more recipes in the book.  A pumpkin pie I did a few weeks ago and I got that pie picture in for it.  Really cool.

I'm kind of doing the sections and getting the recipes in, with little stories for each recipe.  Later on, I can tweek it to look really good.

This afternoon, I also got trying some of the free photo editing sites again.

Befunky, Pizap and Pixlr.  Pixlr and Befunky may be my favorites.  Definitely Pixlr.  Seems like you can do a lot more with Pixlr.  More things to choose from.

Befunky lets you do a bunch of things too, but when you want to do some of the other things it makes you pay so much a month.  I'm not sure if I am ready to do that.

But, I took my Shay doll picture today and did a bunch from that one, one of Julia, one of my niece, Jessicca and a collage of all the female cousins.  I also did a few of Emilie Parker, that really beautiful close up picture.  I added leaves and one of my flower pictures as a transparent overlay.  I guess that's going to have to satisfy me as I still don't know how to do the overlays in my photo software.

It came out pretty, so I posted it on their public FB page for Emilie.

So this was what I wrote at my apt last night.  Today, has been a good day so far.  I didn't have to feel like waking up and getting right over to my kids house so I took a few extra minutes to sleep.  I decided to start locking my bedroom door last night, which now they are harassing me that they're going to break in through my bedroom windows.  Right.

I had at first had to deal with the cats wanting in and out.  That was kind of funny.  At first it was a game, and then I didn't have to get up as much.  They got used to when I open the door, they either come in or out.  Works well.

I watched The Man Who Knew too Much with Jimmy Stewart this morning.  That was good.  I was very pleased to hear Doris Day sing K Cera Cera....

I remember growing up and my Mom would play her music.  My sister and I would be in the living room listening to it.  It's just a song that has stuck with me and is a strong memory of my Mother.  I remember she was looking at both of us as we listened to it, perhaps wondering what we would be.  I'm sure she knew we were both pretty, not one prettier than the other.  Mom was like that, not picking favorites and its the way I am too.

While watching the movie, I knitted more on Brooklyn's scarf.  It's about half way done, I think.  She's little so it doesn't have to be super long.  I want to make more of them.  Those ruffle scarves are gorgeous.  I'm thinking that I could also add my own details to another one.  Bobbles.  Just call me Bobble girl.

Then I started organizing some more.  I just want to have everything have it's spot instead of bits and pieces of things belonging elsewhere.  Like the kitchen gadgets don't need to be in the studio.

Then, I decided to get the camera going and I did a photo session.  Took some pictures of my soup I made last night.  Thinking I could possibly create a soup book too of my concoctions.  More FOOD FOR THOUGHT.

I want to later today work on getting more recipes in.  It would be really nice to get all of her recipes in I want to use for the book and then the stories can evolve, the pictures etc.. the format.  I'm at the library now using their internet and am going to take a look at some of the page set ups to get some ideas for the formatting.

I love soup in the winter time.  I may also spend some time with my boyfriend this weekend.  However, due to all this snow, he has a lot of clean up around town on his agenda for the next few days.  Perhaps for the new year.

I'm going to enjoy this weekend regardless, but it would be nice to spend the New Year with someone.  And I am just excited about getting my apt the way I want it, and it was nice to actually do some things in my studio today.

And this weekend definitely has to be spent writing more chapters in The Glorious Money Tree.  I've really got no excuse not to be able to spend more time on this stuff now.  I've got my laptop reign back and while they are in school I will be able to really focus on this.

Today's soup.  I'm thinking of later during the yard sale season, I will be on the search for different bowl patterns for photographing the food. 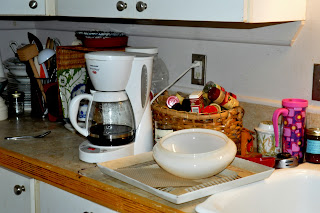 I had to move the coffee pot to this outlet this morning.  The other one must have a fuse out.  And the landlord has to fix that light.  Whoops. I probably should have moved that out of the picture!  My Bad!!! 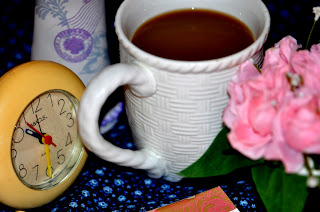 My second cup of coffee!  The first one was weak as I put too much dry milk powder in it.  Milk is on the grocery list!! 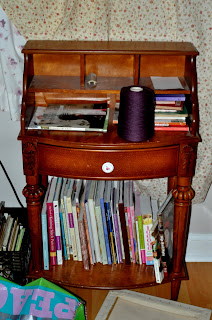 I brought this desk back from the kids house.  Mollyanne didn't want hers and my ex husband had it out in the garage so I confiscated it and a small little piece of furniture you could put just a vase or a plant on.  I love having all my knitting books in one spot now and I could also use it to write on.  I added the knob as it was missing one. 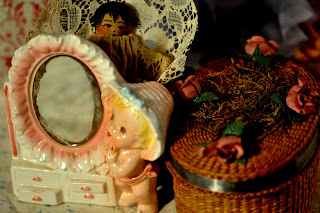 My Mom's old lipstick holder I always loved, her little sewing basket and a cute little doll my Aunt Joanna from out west got me one year. 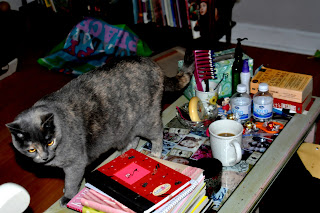 Luna on my coffee table, redone.  I love it now with all updated pictures on it. 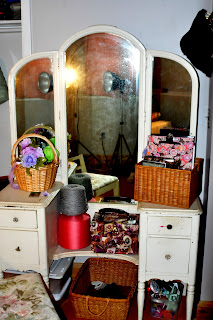 My Nana's vanity in the studio.  It has a chair with it in the lower left.  I love baskets.  This piece of furniture will someday be one of the girls.  I think it also was my Mom's when she was growing up. 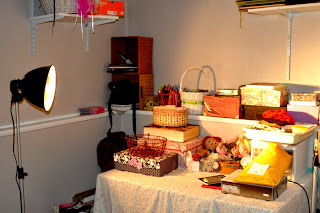 More of the studio.  I draped my Mom's old picnic quilt on the table.  The other side is patchwork, but it is falling apart.  Hmm.... that probably means a sewing project some day. 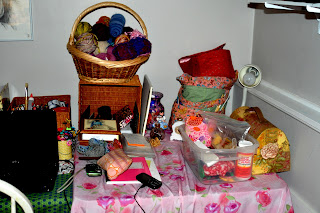 These are my two card tables I have set up where I'm going to usually have my laptop.  I decided to bring back my laptop and electronics and camera.  I can't make those neighbors deprive me of my things because they are threatening to take it after they supposedly kill me.  It's harassment plain and simple. 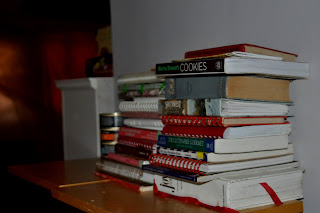 My pile of cookbooks. My Grammy gave me the Joy of Cooking when I got my first apartment and the older Joy of Cooking I brought back from my Aunt Harriet's camp that we had after she passed away.  And I am a Martha Stewart fan. 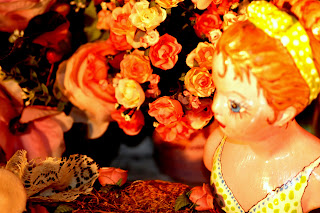 My statue I painted on the table.  This picture came out different than her actual coloring.  Her shirt and headband are more of a lime green color. 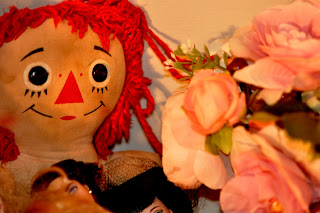 Raggeddy Ann is starting to look a little dirty, but well loved.  I would be afraid to wash her as she would probably fall apart like BunBun did.  Thinking of BunBun, she's hiding out in the trunk of my car, and I guess I should dig her out and put her in a nicer spot. 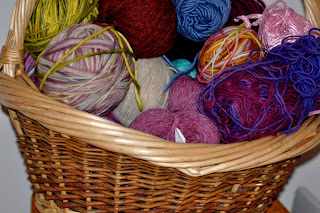 Yarn.  I would say I have enough yarn to last me a long time.  Addicting.


Posted by https://jenniferjofaypaperdolls/blogspot.com at 11:54 AM