A THREAT IS A THREAT!!

Hey, I don't take any threat lightly.  The lady who takes my statements seems like she's fed up, but she will keep getting my statements while I'm still being threatened.

Hey, when a man gets in the hallway and says, I will never touch it again and I'm going to kill her with gloves on, is a very serious threat.  Chain yanking or not, I do not like receiving that threat this morning or any other threat from any of these men.

I will not let any God damned man force me to be a suicide!!!
. I cannot begin to tell you how furious this makes me.  Last week, the jerk referenced me to Lana Del Ray.  Her new popular song about suicide.  I will not sing to it and I think it is a horrible song.  It could also be a song to which teenage girls may be pushed to this because of a song like that.

I just wish there were not songs about suicide out there.  I know people probably can relate to it, but do we need suicide songs???  No we don't.

I will be God damned if someone ever tries to force a gun in my mouth, push me out a window.  It makes me so angry that there are mean people around me who want to rob me of my beautiful life!!!!!


My kids!!!!  Nobody has a right to do it to me and hurt my kids!!!!  Makes me utterly furious.  I've got too many dreams and goals to let sheer assholes take my life away.  I want to live to 105!!!
. Love Marry Me song so much better than hers.  I would like a different song from her much better.

I can belt out those verses of Marry me.  Hey, I don't care if I'm a girl singing a song a guy sings.  Sometimes there are some real soprano lyrics a man can sing and why not sing it if you are embarrassed to sing it because its a guy song.

I love Royal by Lord and seem to be able to go along with hers well.  Except for the fast parts, where I don't know every word she says.

Mollyanne, my older daughter is doing chorus this year and I can hardly wait to go to her first recital.

Just a few more weeks to wait for my move to my new place.  The waiting and enduring mean people will hopefully stop soon.  I want them to stop it!!!  And I will not be a Suicide.  Murder!!!

I don't like coming back to unlocked windows and stolen stuff.  I think they've taken more of my silverware.  I'm down to three knives!!!!  I had an abundance of silverware.  My forks are disappearing too.  I had more!!!

And someone came in and took a pretty paper punch butterfly tag off a boughten scarf.  They knew I wanted to trace the tag and make my own pretty butterfly tags.  It was safety pinned to the scarf, I hadn't taken it off.  Same day my windows got unlocked on me, someone switched two of my mannequins around on me that day too and a big heavy fabric got knocked over from a bag.  The bag where the scarf and tag were in.

I think they knocked the fabric to show me they took the butterfly tag.  So miniscule yet furious!!!  Vicious!!!  Just because they knew I was going to use it.

And those Littlest Pet Shop Hats!!!  I made two a few nights ago and yes, laughed to myself after finishing them, hmmm....  the gutter...  to cover the thingie!!!!!!  Well, after I turned offy lights, jerk number one gets out in the hallway laughing and talking about my "thingie covers"!!!!  Really, harmless kid accessories, but maddening as hell that jerk knew I was finishing them and laughing to myself.  He was loud and I was in my quiet apt.

Do I have to go to McDonald's to have a bathroom break!!  Good God!!!! 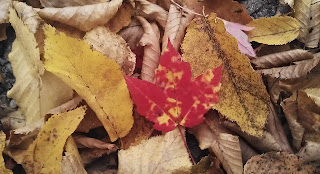 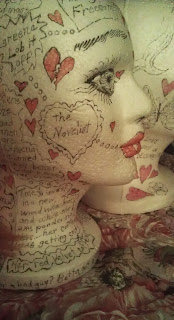 wNobody is going to rob me of writing once I move.  Enough!!!  This gal is going to write up a storm.  Meaning set my alarm clock for early am and non stop until evening hours.  Night owl.  I will be a night owl!!!  The Novelist!!!  Me!!! 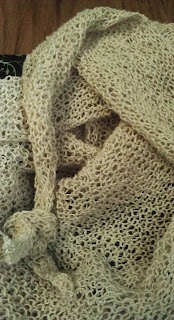 The shawl is finished!!!  The tiniest needles!!!!  This might be a scrunchie.  Perfect for doll sized clothing for my grand kids!!  I want to make lots of doll clothing!!! 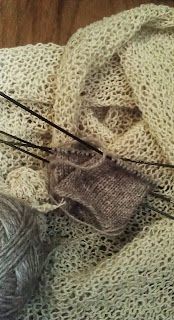 Posted by https://jenniferjofaypaperdolls/blogspot.com at 10:12 AM