Why We need Time to go back in Time.

Ever just find you need some time just to sift through old things?  It can be really satisfying and bring back memories.

Yesterday was that day for me.  Just what my Sunday called for.  I started out with my morning coffee about 7:30am and then at one point figured I would go to one of the old cedar benches and pull out my fabric bag filled with old letters.

I was after old stamps off from old letters for a scrapbooking or decoupage project on a cool sewing bench I got on the side of the road.  The top lifts up and there's two little drawers.  Small end table size.

Well, I more than just looked for stamps.  I ended up ripping the twenty nine cent stamps off envelopes with old sappy letters to my ex and some from him.  Don't have the heart to throw the letters away as my kids may someday like to read them.

I threw out two that were the corniest or darn right silly.  Then I just started reading some of the letters from different relatives, my Grammy, Nana, Mom an aunt and an old camp friend.  It just sent me back into time.

I couldn't bring myself to rip up the pretty stamps from some of their letters.

The old report cards of mine, pictures.

could not stop with just one box.  II then found the old box my. Mom put together for me.  Old baby cards, my baby book, drawings of my Bun-bun and an old story I had written.  Penny.  And little cartoonish drawings that went with it.  I found myself reading it with interest and laughing.  Penny lived in outer Space and there's Comet, and stars, etc....  her silverware was made out of sun rays.
It was a detailed story with I would say a lot of imagination from my mind as a young child.

Oh, and at the end she had to move to earth and marry her husband and have two kids.  Ha ha.

I should dig up another box someday.  I'm hoping it has my Laugh Magazine I did in it.  I was my own editor of the thing and you would find me calling popular songs, movies and celebrities of the day something different, funny and corny and sort of stupid.  And I made up silly news reports etc.....

I probably was inspired by the Mad Magazines and some of the other ones we could buy from Scholastic in the seventies and eighties.  You know, those gross out pictures of an ugly person spouting boogers into the movie goers below.

Then, I just looked through all my old photos and started gathering certain ones for projects.  I had an old guest book I bought at a yardsale and later yesterday I started creating a scrapbook for one of my girls.  I'm writing notes into it too.  I'm going to do a bunch of them for each of my kids.

Then, I got my Big Shot cutter going, with cut outs of flowers, leaves, a sewing mannequin, spools and buttons and leaves for possible thoughts of the sewing bench.  I want to make sure my picture copies of my Grammy and my Dads dad are in it along with my Nana and my Aunt Mary.  Definitely my Aunt Mary as I paper punched my stuff out of a pretty Madame Alexander doll box.  The Madame Alexander dolls go back a long time to the old dolls my Mom and her cousin's used to play with in the forties and fifties.  I will have to take pictures when the project is done.

On another thing, I had a not so nice incident to see another breakin a few days ago on coming back from kids house.  For about a week, I knew someone had come in and taken my magazines for knitting.  I had two shelves filled with my magazines.  Brought a new small stack back and looked and said to myself, I'm missing a bunch.  The shelf doesn't look as tight.  I then rearranged the two shelves and started counting them.  33 in one and 35 in the other.  Two three nights ago, I even went as far as to write up an inventory for each shelf, title and the issue for each.  And I thoroughly double checked.  Sat on coming back I looked and could see an upside down magazine that wasn't there when I did the inventory.  Then counted and got 36!!!  Someone broke in to put one of the stolen ones back on me, and being meticulous and extremely organized, I noticed it, called the police and we've got it documented.  I've got to change my locks very soon.

And I am most definitely not the type of person to sleepwalking and move my things and not know it.  And there's no ghost.  A stalker.

The other kind of strange thing was when I was moving my things from my ex's porch or mudroom to my car, I was making a bunch of trips and at one point, I looked down and there was a three inch rusty screw placed by the drivers side of my car.  It was weird as I can't remember it being there, but maybe it was.  At the time, I picked it up, hid it under my pizza container trash and threw it out in my exs trash.  Just thought it was strange to see it by my car.

Funny I should find a big rusty screw and now I'm sitting in the false comfort of a rust colored glider chair.  There's an archaeology dig for you.

Anyway, maybe my son dug it up from the back yard a while ago with his metal detector he got for Christmas last year.  He's been finding some cool things and I think he's going to be sticking with archaeology.  He wants to go to Greece on a class trip next year.

Hence my growing interest in the Gods and Goddesses.

Well, gonna get going to see my kids and ser what I can rescue from things that are getting thrown out from girls rooms.  Their rooms will be neat as a pin for a little bit and I want to take a few cool pictures of the falltome leaf set up my exs New girlfriend has hanging in the kitchen.  Very pretty.  Which brings me thinking of the good food we will all be eating next week!!!

The bench filled with baby toys and things for my future grand kids.  And the cd clock radio I can't quite figure out how to get the CDs to play. 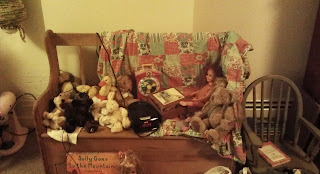 Posted by https://jenniferjofaypaperdolls/blogspot.com at 12:29 PM