Another Month to start fresh

Here we are into February and I'm so glad we got the coldest month under our belt.  How many of us had to jump start our cars!!!  Pain in the neck, but I learned a lesson:  have more than half a tank of gas in the car during these coldest months!!

Ah, tomorrow is Ground Hog Day!  And this is a short month.  I've got my birthday towards the end of the month and I told my kids I will be happy with some handmade cards and that's just fine.  Handmade is the best.

Time to write today!  I've got to get back out of my writer's block rut.  I did hand write a chapter last week, but I need to get back to typing the novel offline.  Don't like my novel getting hacked by a witch below me.  It makes me mad and at the same time sort of uncomfortable to write the new chapters.

It's not published, witch!  Means, it's not available at your fingertips!  Or it shouldn't be.

As usual, I've been knitting up a storm of some headbands, a few small messenger bags and now am working on the Rosalie school scarf pattern I downloaded from Ravelry.  The Twilight Rosalie scarf!!!

I embarrassed my girls by singing a Patsy Cline song last week.  I brought my CD player and belted out a tune to Walking after Midnight.  My younger daughter turned around and I think she thought it was funny hearing Mom belting out a tune.  And the other one wanted me to stop singing.  Embarrassed.  I told her I would finish the song and then we would go to Janet Evancho music.

I told the girls they will someday look back, when I'm old and gray that they would remember their Mom singing to tunes.  I told them that I'm not the best singer, but it's the idea of if you want to sing to a song, sing it and do not care what others think.

If you have a voice and you want to use it, USE IT!  Don't feel insecure that your singing isn't good.  Just sing and be happy.  My aunt used to sing in the shower and we would laugh.  Good old camp days!  She didn't care what we thought.  Sometimes, I think she sang just to see us think it was funny.

Opera and Barbra Streisand was her forte.

Yesterday, I got watching a few Crazy Frog videos with my Down Syndrome child.  That frog needs to put some pants on.  What's America coming to these days, that the kids have to be subjected to a naked Crazy Frog on their favorite videos.

When my kids first started listening to Crazy Frog, he had outfits on.  One of Jake's old Crazy Frog toys has a shirt and pants on!!!  Get with the program and teach these kids right.  I don't like the fact my child is watching a naked frog strutting his stuff.  I don't like my kid looking at a little weiner on a frog.

Put PANTS ON THAT FROG!!!

My Dad is burning through his candles really fast, so I know what I'm looking for him at yard sales these coming yard sale season!!!  And I delighted in telling him I got him a Paula Deen candle!

Today or tomorrow will be a baking day!  I told my kids I would make some cranberry scones and bring them down in a few days.  That will be a treat.  It's been a long time since I've made scones.

Don't you love the smell of something sweet filling the air with the scent of spices!!!  I just hope I don't burn down the house!  I know I won't.  Just kidding!!!

I will say I've gotten my share of smoke detectors going on occasion when cooking something at this apt, the old one and at the kids house when I lived there.

In my very first apt light years ago, I smoked the house out burning macaroni and cheese.  Obviously it went straight to the trash!  Nothing like blackened bloated macaroni noodles!!!  Ick!!!

Another day under the sun.  Yesterday, my oldest daughter said that Daddy said I should talk to her about my Mom.  To which I said to her, I will talk about my Mom as long as my daughter knows I'm not going to my Mom in Heaven anytime soon.

The day is still young and there's plenty of time to get things done or at least get the projects further along.  Don't you hate it though when there are some days your projects don't speed along?  I have days when I feel I could have gotten more done, but didn't.

I'm a procrastinator sometimes, I will admit it.  But, anyway here's to a new month to accomplish new things.  I'm still not quite sure what that cover is going to look like.  I've started a few covers with my main character, Sally.  In one drawing she has freaky eyes and am leaning to one I did more recently.  I copied a drawing I had done of my Grammy a long time ago and put braids on the drawing.

I'm liking that one better, but am not sure what the whole cover will look like.  I also don't want it to be completely black and white.  I will keep playing around with the ideas.

I've got to get better at protecting my artwork too and put them straight into my protector folders.  I brought one I did of my Mom to the kids house and I ripped a part of the bottom by accident.  I can fix it, but I've got to be more careful in the future and protect them right away.

A knitting tip!  Have some tweezers nearby!  I've been tackling as I'm knitting, my hair gets tangled into the yarn and I"m constantly pulling the fallen strands out of the knitting.  Tweezers will come in handy!!! 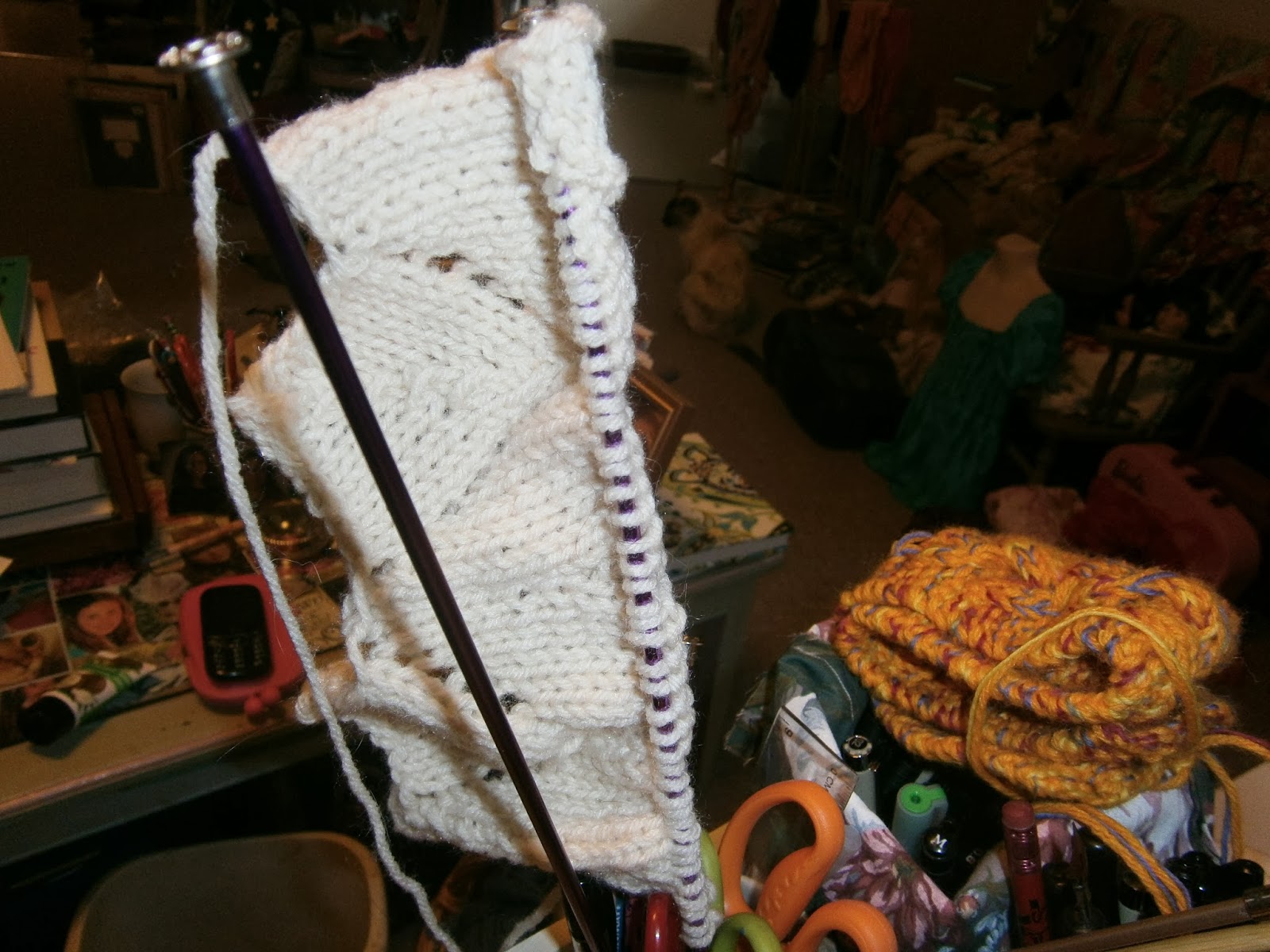 The beginning of the Rosalie Scarf.  It seems like a very easy pattern.  Just following a simple lace pattern. 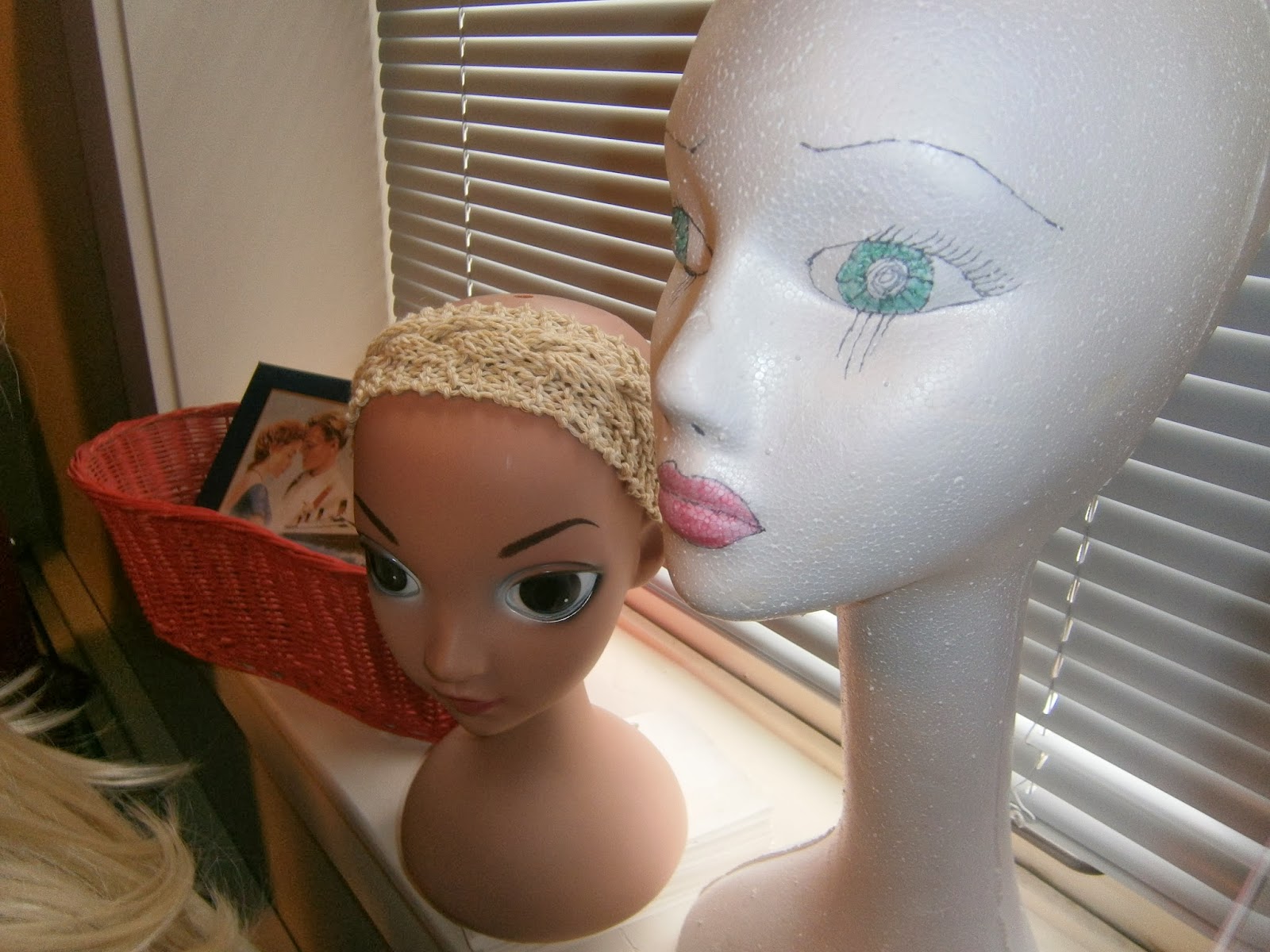 One of the lace headbands that may be for my future grandchildren if I get girls!  If not, this is a good mannequin to sell the baby and girl headbands, etc... 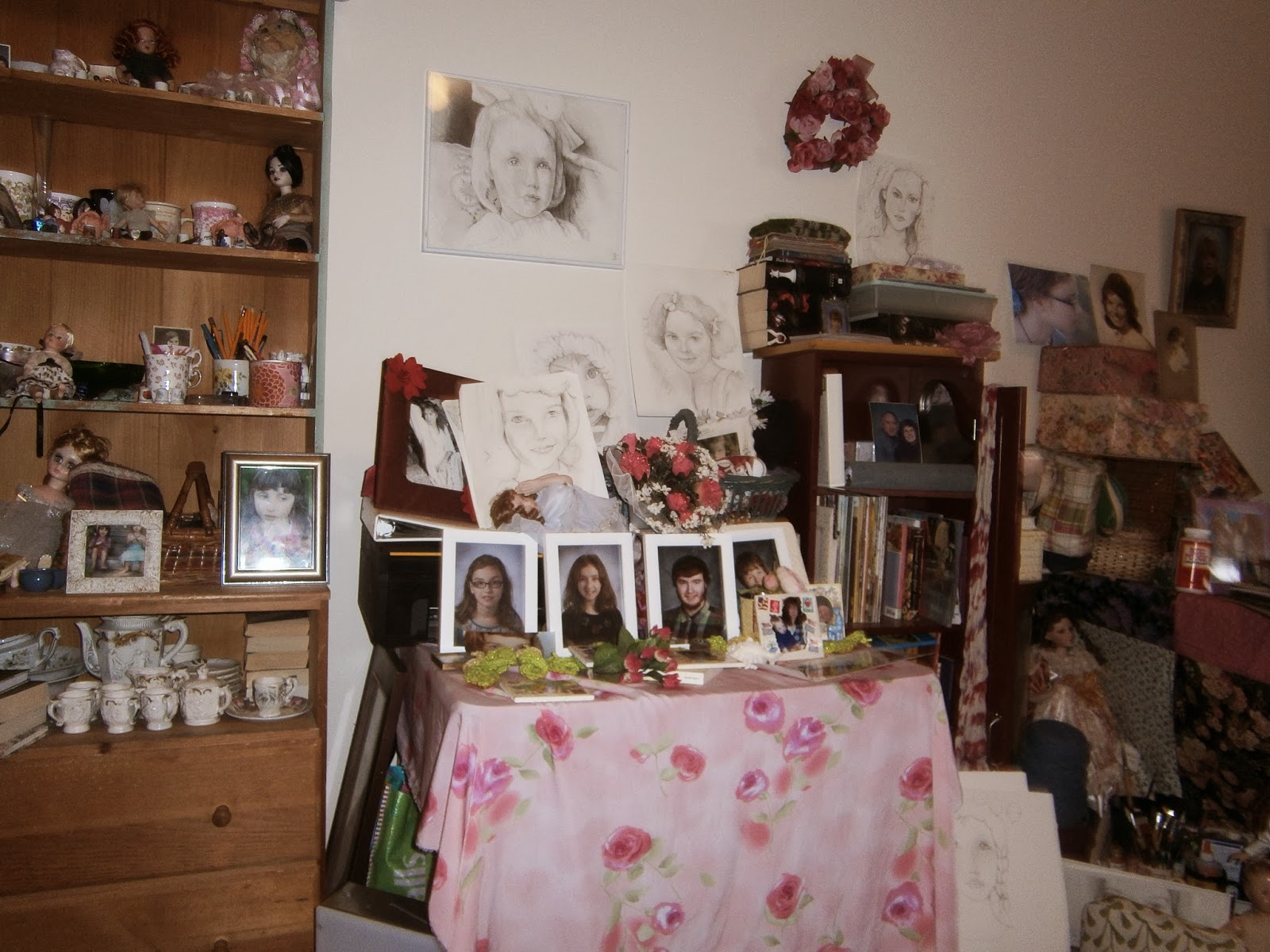 The drawing above my kids is the one of my Mom.  I tend to like to spread the artwork out sometimes as if giving myself a critique.  We used to do this in college where we would tack all our artwork for the critique on the wall and our four teachers would come in and give the critique.  Always nerve wracking but we got good feedback, and took the criticism as well.  No artist is ever perfect.

Even the writer.  We all have some flaws that crop up in our artwork or writings. 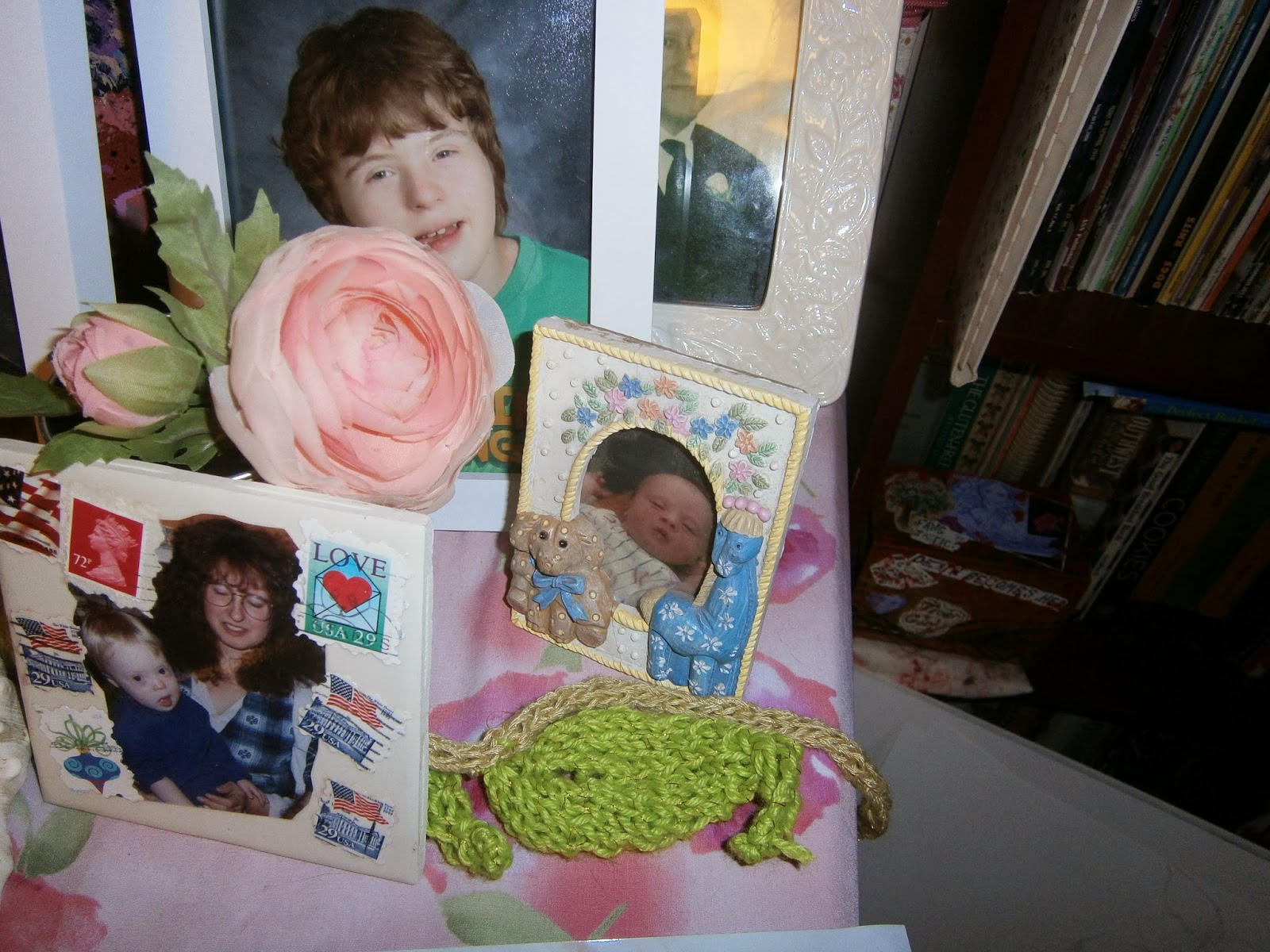 The leaf cuddler pattern, to which I like better on my vine instead of the one for the coffee cup.  And I finally finished my tile project one for each of my kids.  This is my Down Syndrome child.  I won't have too many pics of my kids here, but I like how this pic is set up with him as a baby, then a young toe head and onto his darker brown hair.  I kept looking at the old stamps I had clipped from some old letters, so each tile with my kids and the stamps has Forever on it.  And one stamp has Justice on it!!!! 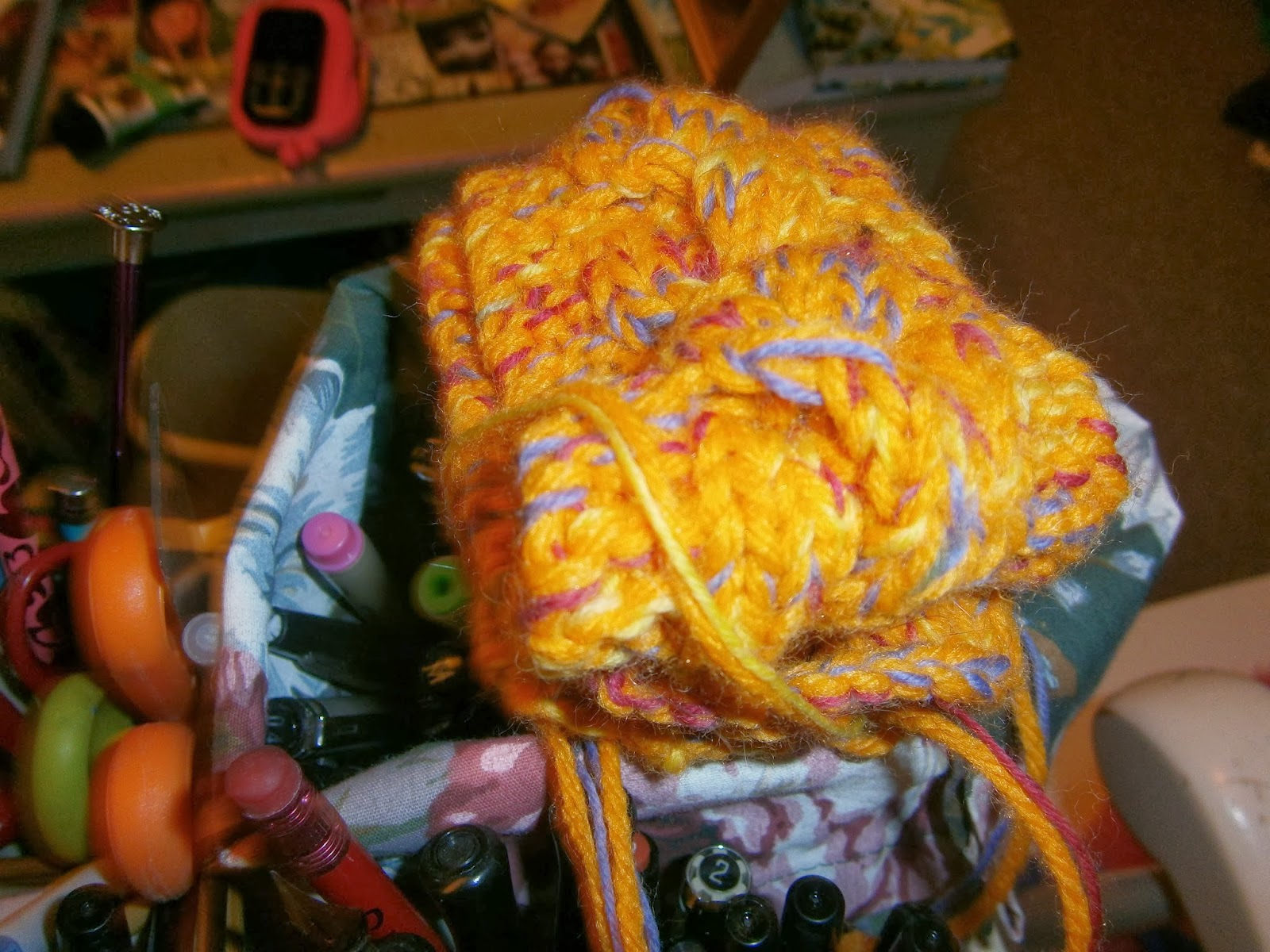 The other cabled headband I've got to sew up.  I did this one on my smaller needles so it is a little tighter weave.  And, I goofed on it, so it's Mine!!!
Posted by https://jenniferjofaypaperdolls/blogspot.com at 11:05 AM