Donut Hole Recipe and other thoughts

I finally decided to try out my cake pop maker!!!  I got it beginning of last year and hadn't used it yet!!!  2 cool!

Here's the recipe I used.  I think I got it somewhere on the internet but forget where.

I didn't have the powdered sugar and used about 1 cup sugar to 1 tbsp orange juice and just rolled them in that.

It was so funny to see them so round within a few minutes.  Popped a few in my mouth and am going to make sure there's some to bring to my kids in a few days.  If I had thought, I should have made them closer to the day, but too late now!!!

I'm just minus the cake pop sticks.  It was maddening to purchase a set of 50 cake pop sticks, I had never even used them and it's one of the darn items that got stolen from my old apt.  I am inclined to also believe it was a woman coming in and taking my womanly things.  But a man came in to take my budgeting pads with the monthly budgeting on it.  And it was a man who came in and turned on my burner!  That I know for a fact as a woman went up to him and said to him that was a terrible thing he did.  She called him out on it.

Thank god I don't live at that apt anymore, they were the meanest people EVER!!!

I would think it would be a woman to take my 11 trousseau saucers, pieces of my mother's china, two sets of silverware, cake pop sticks, a movie and other things.  I would lean towards it was most likely a woman coming in taking those things.

Other stolen things could have just as easily been a man coming in to take my things and move my things around.  A man was coming in as well.

I'm going to pray that a witch isn't starting to come into my new place again.  I noticed a few things over the weekend that I didn't like and had to call one thing in particular to the local cops.  She better not be starting to come in again.  Whoever it is, has got to realize there may come a day when they will get caught for multiple breaking and entering my apts.  It's a multiple felony and my items never got recovered.

Well, I finished my Rosalie School scarf and am onto making another of the same color for my daughter and my older girl wants one too of different colors.  Possibly red and black.  I told her it will be what Mom has on hand.

I thought they may have a snow day today, but they ended up having school.

I'm thinking I am going to use the leftover sugar mixture for my coffee.  Then, I was checking all my old essential oils and made a salt bath mix.  Cleaned up them as well.  Those things can get so messy and they were drenched in spilled oil but in a bag thank god!

I finally made myself hand write another chapter to the book and I'm going to work on more of it later on this week.  I've got to get back to typing it and editing.  It was those darn chapters where I got stuck on and wasn't sure how to make them progress.

And in the back of my mind, the worry the girl underneath me whom I recognize from the old place, hacking my laptop and getting my unfinished novel just ticks me off to no end.  She had no business stalking me to a new place.

I can't control what she hacks, but I can make sure there's absolutely no contact between me and her.  I'm recognizing her from somewhere else as well, and she never had any right to bother me.

I had to talk to my girls about why guns are no good yesterday.  One of them made a gun finger at Mom yesterday and I've got to tell her if she ever does that again, she's in her room.  No child should be taught that's okay to do to your parents.  Maybe she thought she was being funny, but that's got to never be pointed at Mom ever again.

It can be uncomfortable talking to kids about certain things, we got on a very brief talk about why they aren't good.  Then, it went the completely opposite way when my Down Syndrome child was listening to Sesame Street videos on his ipad.  Mom got treated to Ernie's Rubber Duck song on a multiple repeat!!!  And the other one he sings about living on the Moon.

Now, that sent me back light years!!!  Back to when my boys were little and I tried to push Sesame Street on them.  I spent some quality time sitting on his bed knitting the scarf while he listened to his videos.

Any time with my kids is good quality time.  Nobody can take that away from me EVER.

I talked to one of my girls about everyone having flaws and that nobody is perfect.  Not even their dad.  NOBODY IS PERFECT!!!  We all come with some flaws.

I'm thinking soup of some sort may be my prediction into the near future.  I decided on a tuna fish sandwich earlier and came close to dragging out my Mom's sandwich maker!!  Ah, maybe tomorrow.  Sometimes it's the extra step in the kitchen we don't want to tackle and we end up doing the quick and easy just to save ourselves the time.

I guess I'm done here for a little bit.  Thinking of getting some more done on her scarf.

And fitting some writing time in.  OFFLINE so a witch can't hack it temporarily. Cute little bite size donuts!  I'm thinking I may have to try a chocolate one next and some glaze that will stick good to the donuts. 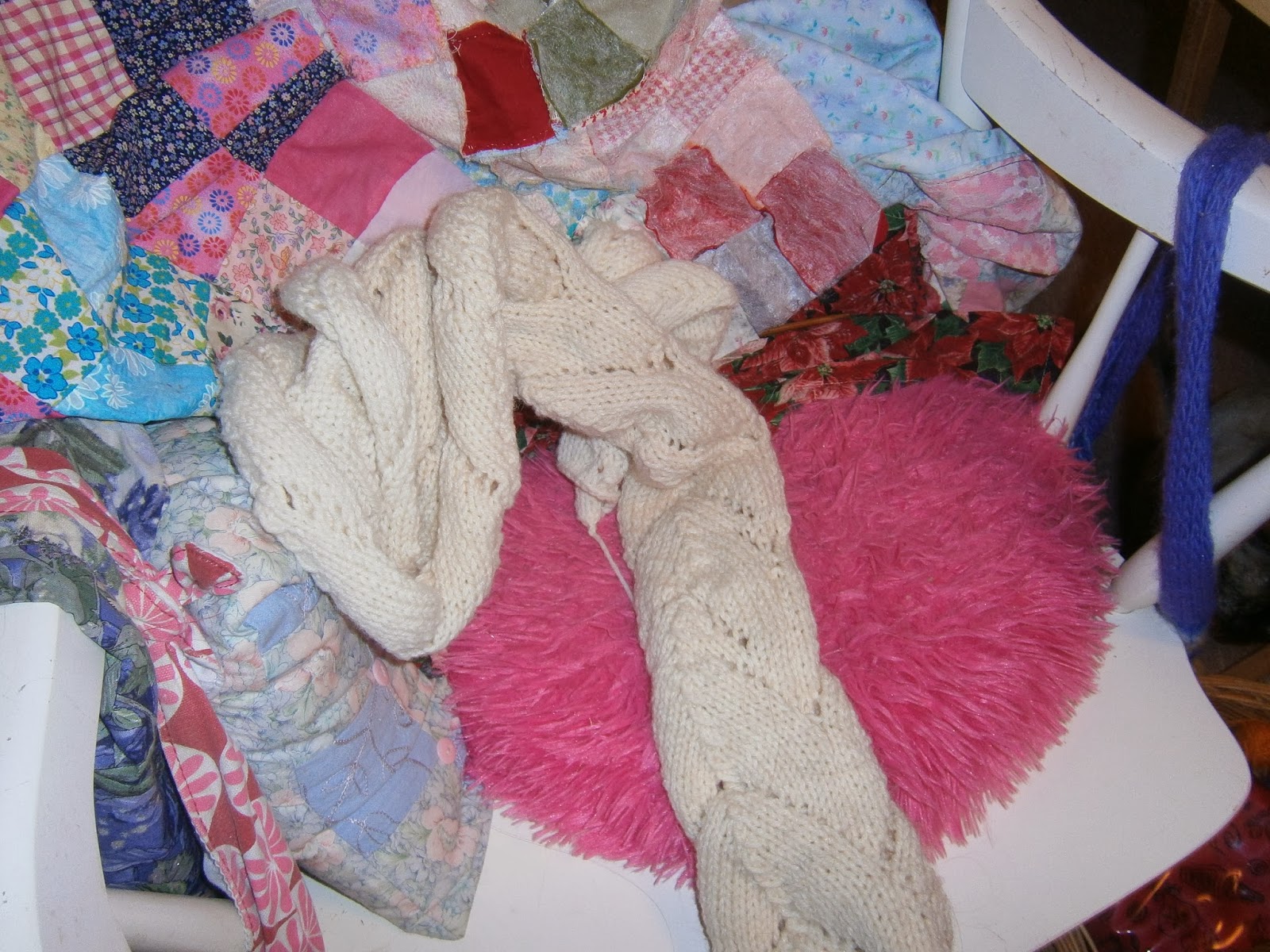 The finished scarf and the beginning of Julia's scarf.  She said she has an ivory hat so this should match it. 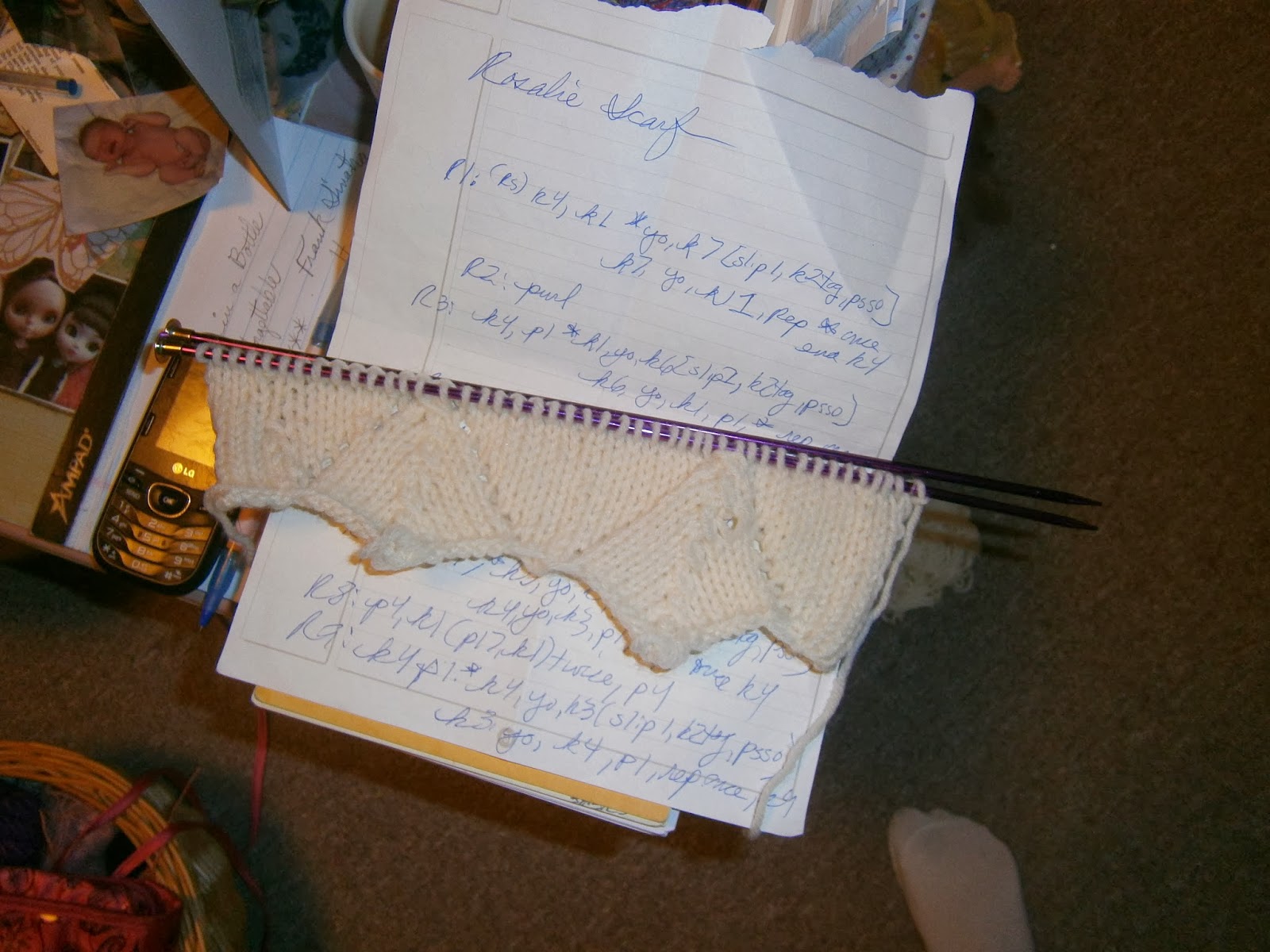 The leftover sugar.  A little bit of orange juice flavoring in my next cup of coffee!!!  Yum!  My girls and I are going to get a caramel hot chocolate treat on Friday!  You know those little individual packets at the grocery store.  I've tried the mint ones before and those are good!

I had to tell my Dad today how fast that bag of Reese's peanut butter cups went.  Gone within a few hours!  It was an early Valentine's treat.  There's a Fay sweet tooth going on!!!

Not married anymore, but I still have the same name as my kids.  That's cool, plus I didn't want to change it back for my art and writing purposes.

I'm listening to that Superman song on the radio right now.  It's the one where it says, she's talking to angels, counting the stars, making a wish on a passing cloud.

A few times I heard it, I put my hand on a bible and claimed I'm waiting for my superman.  GOD!!!  Right!!!  He's the ultimate superman for us to believe in whether we go to church, read the bible all the way through or not.  We believe in God and that's what counts. 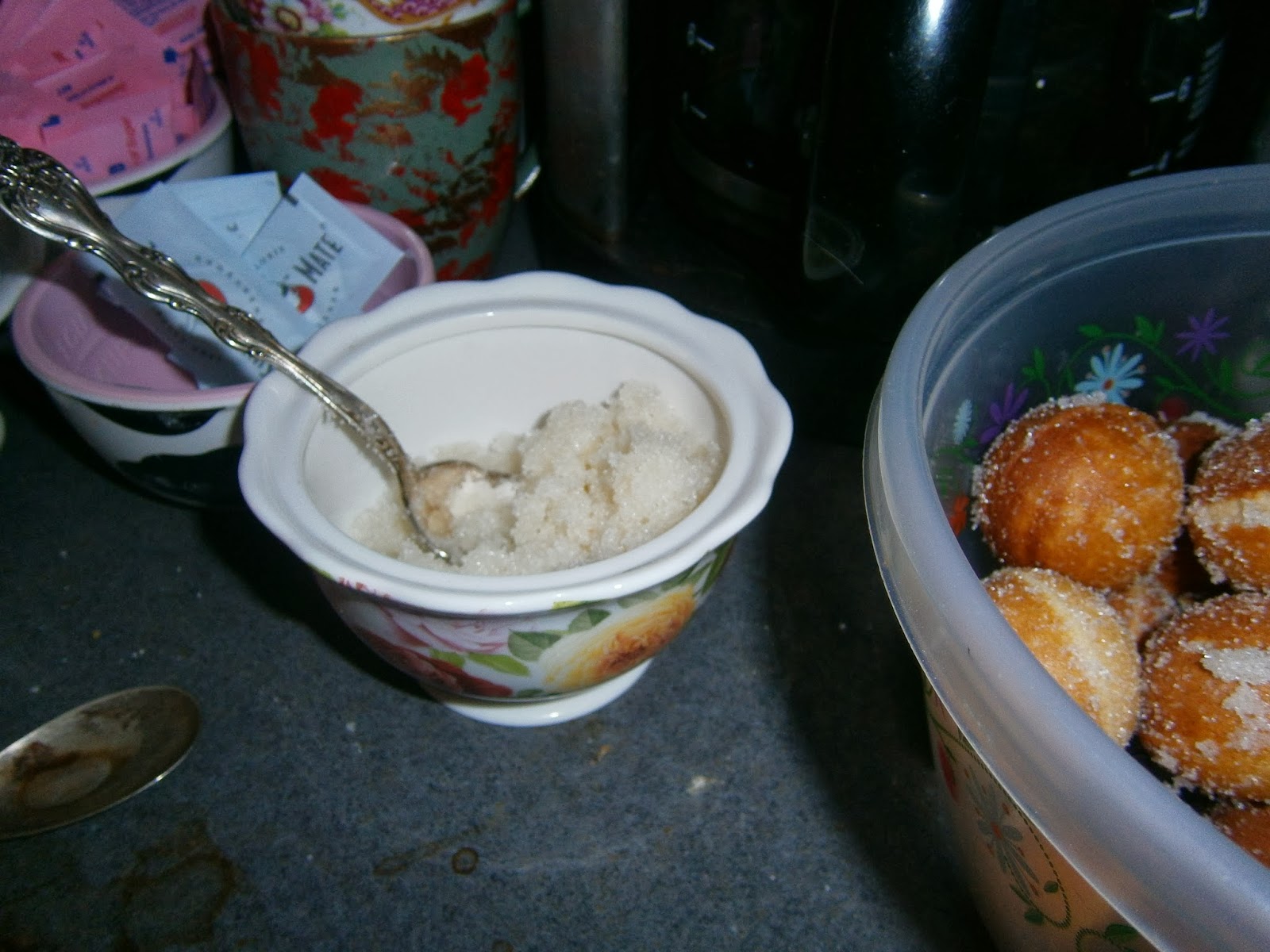 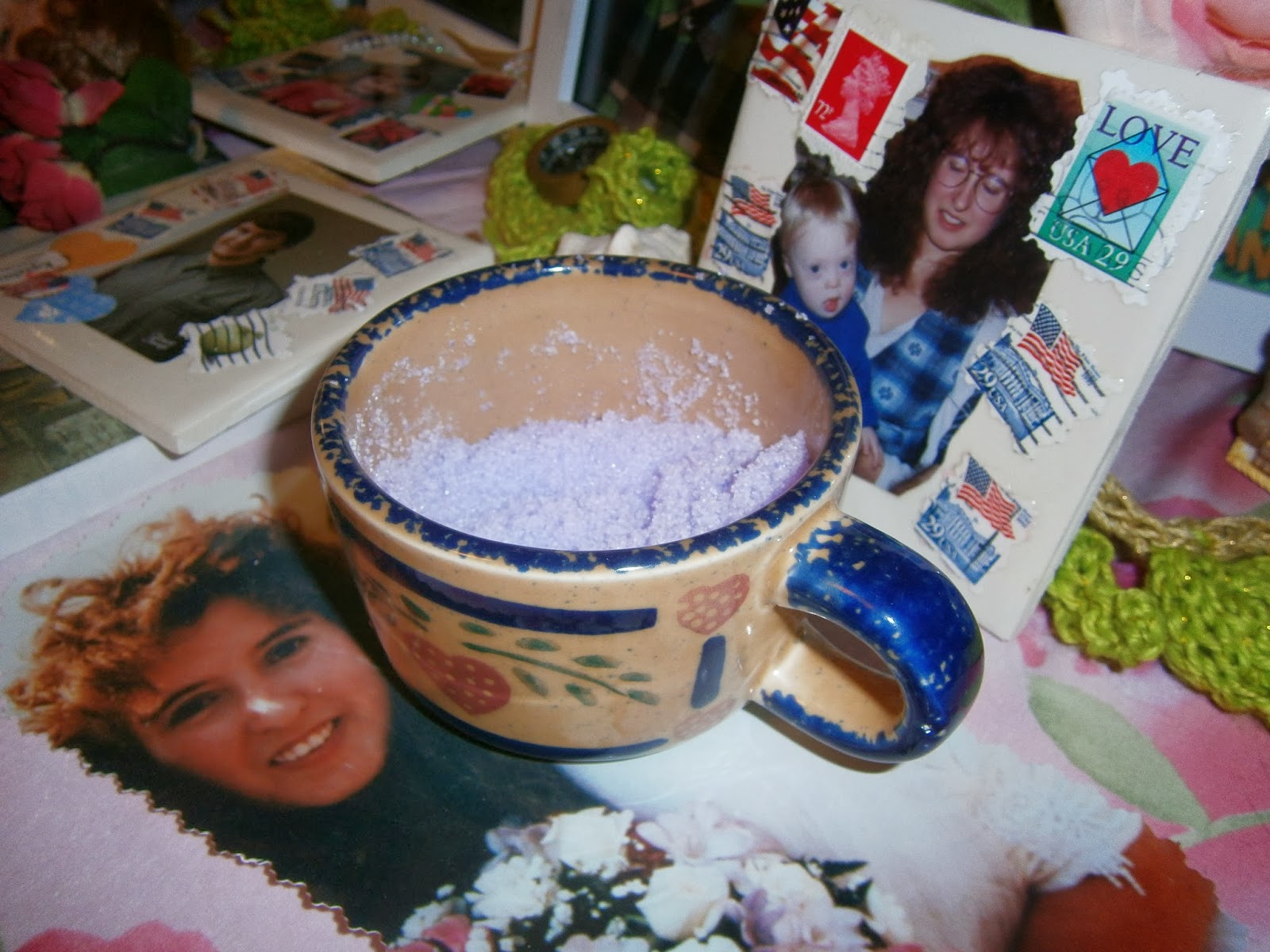 My salt scrub or bath soak.  I ended up just putting some of the leaking essential oils into this one to get them gone and it's actually purple!  You can't tell in this picture.  And, ah, there's my ripped up wedding photo.  I took some craft scissors to it a few days ago.
Posted by https://jenniferjofaypaperdolls/blogspot.com at 11:58 AM