I ended up seeing my kids yesterday instead of today because of the storm but have talked to most of them.  I will catch the other one later as he was having a sliding day with friends.

I've got extra coffee brewing and am going to begin to do some more typing into The Glorious Money Tree.  I was able to push myself to write the next chapter into my Taylor Swift notebook yesterday, managing to get about five hand written pages in.  So, I've got the two hand written chapters that deserve to find their way into the typed manuscript today.

It was Balzac who supposedly drank 50 cups of coffee a day!  I guess I'm going for five, which isn't a good thing but I am treating myself today.  I may add some chocolate extract as well.  Just a dab of course as you do not need much of that stuff.

It makes me mad that I've got a witch breaking into my apt again.  Really maddening.  It's enough for me to know she's coming in again and I don't like it.  I wish she would get caught.  Since the old apt, I would easily say, that's a good amount of break ins!  I don't like coming home to seeing a really tiny picture flipped over when I know it's been face up and my cats would not be able to do that.  Really creepy black witch!  And there's been a bunch of other noticeable things moved on me as well to know she's taken advantage and breaking in while I am out visiting my kids.  Really mean!!!

And she's bothering me late at night while I am trying to sleep in the room underneath me.  Rattling her closet door late at night to scare me that someone is going to come out of my closet.  Very mean.

Anyway, she's got no right into my apt at all.  That's multiple felonies for which would probably get her life!

I've been knitting some today as usually and I really need to try and set it aside for a while and devote some good time to writing.  It's hard when I know that witch would like to get her hands on my unfinished new chapters to the novel.  It's not hers!!!

Meaning, I'm writing this post and then I'm offline immediately so she doesn't have much time to hack into my stuff.  It's not her business.

My daughter's scarf is done and I'm using her same colors to do the same Rosalie school scarf pattern in a smaller size for a headband. 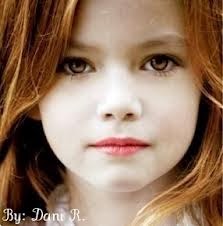 My most important thing about Valentine's Day is my kids.  I know this is Renesmee, but she's a kid just like my kids and I put my kids first.

This morning my local radio station married a couple and I heard the Twilight Thousand Days song as she walked down the stairs.  I love that song, and for me it means that I've loved my four kids for a thousand years and will love them for a thousand more and eternity.

Posted by https://jenniferjofaypaperdolls/blogspot.com at 12:23 PM