Is Prince Harry to blame or should we blame the parents?

Okay, here's the last post for a while unless if there's some new topic that people want to discuss opinions on.

So who would you blame for this incident in Las Vegas?  Prince Harry or his parents?  I think people are on the fence about this.

I've heard that some people believe that he's really not to blame but it's more that the parents are to blame.  People have discussed that it's his upbringing and that he's only following in the footsteps of his parents.

This is what I didn't realize about Prince Charles and Princess Di.  I didn't know that he was having a discreet relationship with Camilla while he was still married to Princess Dianna.  So, now I can understand more the reason for their marriage crumbling and why she later went on to have her affair.  She did have an affair, right?  Please clarify if I'm wrong.  And there has always been talk that Prince Harry may be the result of it.  But it hasn't ever been confirmed as it should remain a private matter within the family.

If you were adopted or the result of an affair, you wouldn't want the world to know it.  It's a very delicate matter.

Maybe Prince Harry acts out because of the way his parents were.  What is the famous expression?  The apple doesn't fall far from the tree.

Like with abusive parents abusing a child.  In many cases, later on that child is going to repeat history and do the same thing.  It's teaching the child that it's okay to do it.

Not very different with acting out, partying and having affairs and just doing what Mom and Dad did.

And on a different level, if a Mom or Dad commits suicide, it scars the children for life and also opens the door to them that it's going to be okay for them to do it too. And that's all a terrible shame.

I've been there once for a real stupid reason, which was solely thinking that I would never publish one of my novels.  It was only one weekend that I thought about of it and I will tell anyone this who is ever thinking of suicide.  It's never the answer.  You know what stopped me?  My children.  I kind of had a plan in mind of how I might do it and I thought about my oldest arriving home to find me dead on the floor from taking pills.  I had a dream one of the nights of how he would find me and it crushed me and then I just felt angry with myself for ever thinking about it.  All over a really stupid reason.

I think it was just the rainy weekend and I pretty much had my novel completed, had a local editor read it and evaluate the good and bad points and I knew I had to edit it as she saw things wrong with the first novel I finished.  That one has a lot of work to do on it.  And I was sitting in my car in the rain waiting for my oldest to come out of a school party.  I think it must have been the first year that all my kids were in school full time and I must have hit that mid life crisis where I probably was thinking, okay, now what do I do with the rest of my life?  We all go through some sort of mid life crisis on some level.  I've always had my heart set on being a published writer and becoming famous for my artwork.  I've always had my heart set on being something like Van Gogh.  Don't we feel very disappointed when we don't get something we have dreamed of all our lives?  But life just ends up happening the way it does.  I think we're just these living stones that God places somewhere and we have a destiny that has already been written in the wind.  We're just acting out his greatest play ever created, you know.

I guess it was that I always wanted to be published and I suddenly felt as if that would never happen.  I was sure wrong on that one, seeing as I decided to take the self publishing route to complete my accomplishments and that's the way I'm always going to publish.

And I will say this to anyone who has ever remotely thought of suicide, that if you ever find yourself there, even just one time like me, get yourself out of your funk no matter how bad it is.  You're not worthless. What you do next is never, ever look back.  Play the game of life as long as you can, because the world is so much better with you in it.  I never once have thought I was worthless ever in my life, but I did have my doubts about my novel.   Mine did not last long at all and deep down I could never do it anyway.  I can't see how they can attempt to slash their wrists.  A grammar school friend dared me once to prick my finger with a little kitchen knife and I watched her do it and then I couldn't do it.

Okay, I guess I strayed a little bit.  But when I get writing, I just get on a role with my thoughts and I keep typing.

My opinion on who is to blame that it would be both Prince Harry and the parents.  You can't just blame the parents and not Prince Harry.  He is after all responsible for his own actions and not them.  But they are the ones that perhaps should have taught him a little better about morals and other values.  Maybe it just didn't get enforced enough due to the fact that they strayed too.

Clue me in if I missed some facts about Prince Charles and Princess Diana.  I do remember watching the Royal Wedding when I was growing up, but I was just a little girl and didn't follow a lot of the older generations and I don't know who is who on all the royalty.  And what I do remember when I got older is that Prince Charles and Princess Diana parted ways and there were TV movies about them that I may have seen bits and pieces before my Mom sent me to bed.  And as I got older and got married, I really only knew that she was a great business woman, passionate about her work and caring for the world, and that she had her later love, Dodi Fiad (I'm sure I haven't spelled it right).

And then there was the terrible chase that caused death and great loss of a beautiful person.  Who knows, if she were still here today, maybe Prince Harry could have been a little different with a mother's guidance.  That's why I am thankful every day that I'm here for my children as I wouldn't want anyone going to my funeral before my time is really up. 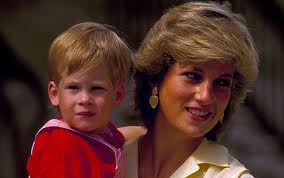 Posted by https://jenniferjofaypaperdolls/blogspot.com at 8:21 PM