Jesus Christ Lindsay Lohan! Get off your DOWNHILL ROLLER COASTER!!!

For crying out loud, Lindsay Lohan, you just can't seem to realize what you are doing can you?  Do you realize that America used to love you and think your movies were really great?  You had a really good start in life and you FUCKED IT UP.  Pardon my language, but I would basically say this sums it up.

I used to love your movies.  Parent Trap was great (still love the original Hayley Mills one better), Freaky Friday was cute, Confessions of a Teenage Drama Queen was good, Mean Girls was pretty good, and I think there was one more in there that I liked.

You showed us that you could not commit to the episode of Glee by being 2-3 hours late.  What actress flubs that one up, I don't know.

I'm quite unsure whether or not I want to see you in Liz & Dick.  True your picture looks good, but lets face it, you're rusty.  I would not want to see you tarnish Elizabeth Taylor who truly was beautiful.  She had flaws too, but certainly none of yours.  Trouble just seems to follow you.

Now there is this recent incident with Chateau Marmott of you having an outstanding bill of $50,000 during your stay there.  Which sounds like it was well over a month after your film ended and you should have gone home where you would have saved your money.  Quite frankly you must not have that much left to spend.  It sounds like you are quite in debt.

First of all if your production company agreed to pay for it, then why does it look like it is falling on you?  Perhaps because it wasn't written in stone is more like it.  I can't understand it why these places agree to let you put it on your tab.  I particularly think that you now need to be like all of us regular people and only do what you can afford.

I honestly don't think you can afford staying at all these hotels when you can't even seem to pay all this money back to them.  And to get Botox, fancy dresses and all kinds of other stuff not to mention the booze, drugs and other stuff that has corrupted your life.

True maybe that Samantha Ronson was partially to blame, but she wasn't the one who put you where you are.  It is you who chose to corrupt yourself.

Do you expect them to pay for all your cigarettes and mini-bar purchases while you were there too?  They shouldn't have to pay a dime for your bad habits.  Come on!!!

Your lungs must be black while mine are clean as a whistle.

And I bet you did steal those $100,0000 worth of watches, sunglasses and Tiffany silverware from that millionaire, Sam Magid in his Hollywood Hills home.  You had to stay there didn't you and they wouldn't let you leave.  I think they have witnesses that claimed you and that Gavin Doyle handed them a bag of stolen items.  So all those sunglasses you like to wear.  Are they yours or stolen?

And the LAPD detectives have wanted to interview you and Gavin yet you have rejected their interview.  You do know that even though Sam Magid took back the story saying items are back, the detectives are not going to drop it.  I hope you get caught and go to jail.  You deserve it.

You just seem to have a history of stealing jewelry and other stuff.  And in court you seemed to be the whiny that you didn't do it, but the evidence was stacked up pretty darn good.  I just hope that they have enough to nail you this time.

It really disgusts me that you got away with some things when you are guilty.  That court should have never let you have house arrest because there was no room in the jail for you.  If I had been one of those officers or who ever was in charge of the decision, I think I would have most definitely made some room for you there.

You need some serious jail time.  That may be the only thing that would smarten you up as nothing else has.

And that car accident.  Don't give me that S......  that you were a passenger.  The cops know you were a driver and it sounds like that case is still ongoing too.  I hope they can get all the facts to prove it and to show the court that you have violated your probation on several occasions.

There's just no need of it.  What makes you do it?  Why do you need to steal?  The majority of us are happy with what we have, but it seems to me that you are not.

“Cleaning MY jewels :) ...... I love feeling like Elizabeth @DameElizabeth @damelindsay.”

Guess what?  You aren't Elizabeth.  You are Lindsay Lohan, just a girl who has made us all pity you that you don't have the brains to smarten up.  And we don't think you can ever do it.  Time and time again here you are showing up in a bad light everywhere you go.

You are just a mess up and will probably stay that way until someone decides to take away all your credit cards, etc.. toss your ciggies down the drain, make sure that you are only drinking a non alcoholic beverages.

You should be going to AA and get the help you need, but it seems to be that you can't escape your bad habit, so it probably wouldn't do you any good to go.  You don't seem to listen to the public.

WE ARE DISGUSTED WITH YOU!

I think the judges need to not give you this special treatment just because you think you are Lindsay Lohan and you have privileges.  You do not.  You are now in the poor house with the rest of us and you shouldn't be putting all this stuff on your tab.

All these places should smarten up and tell you to go somewhere else,  because you can't pay up.  Why should that put them in debt because of you?

Now we are just waiting to hear about your next mess up.  Which will probably be soon by the way of things.

But you can't help it because it's just the way you are.  Always messing up.

Tell all your future jail mates to give you a harsh lesson in life as I think that is what you need.

You're not a respectable actress anymore and it would take a tremendous effort on your part to change for the better.  I don't think you have it in you.  It will take a very long time for people to believe in you again.

You've been doing a lot of lying which makes you look bad in the public eye.  You should have been aware of that when you decided to become famous.

Now if you were to be compared to someone like Audrey Hepburn or Katherine Hepburn, you could have just never measured up to them.  And I know you have been compared to Jane Fonda, but the truth is that you do not compare.  She is a far better actress.  You were good, but it's going to take a damn lot for us to say that you are still good.

Go drink some tea or coffee and try reading a book about Changing Your Life around for the Better.  That is if you can be able to see the perception that it would be telling you.  You don't know when to stop. 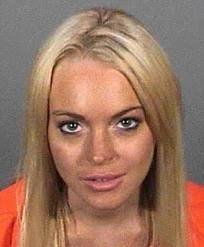 This may be the only thing to save her.  She needs a good year in jail to think about her life.  Maybe longer. 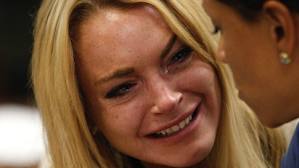 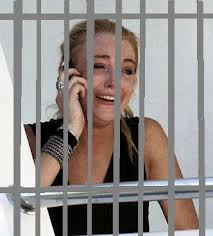 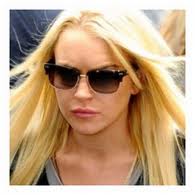 The  Question:  Are these Lindsay's sunglasses or someone else's.  She thinks she can have things that aren't hers.  I bet her mother is a bad mother for not teaching her any lessons in life and the father is probably just as bad.  And the mother also contributed to her downfall. 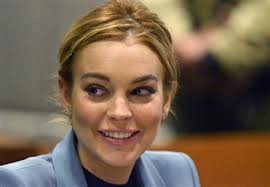 She's laughing now because she thinks she's going to get away with stealing Sam Magid's watches, sunglasses and Tiffany silverware.  People caught her doing it. 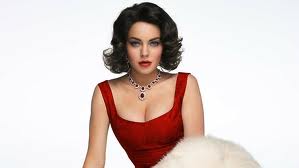 True, she does look good here, but she's still not Elizabeth Taylor and doesn't even begin to compare to her.  Wrong actress for the job.  They could have done better.  I probably will end up watching Liz & Dick just to view it, but that's where it's going to stop.  In my mind, Lindsay Lohan's acting career died a long time ago.   What happened to the little girl below, is beyond me. 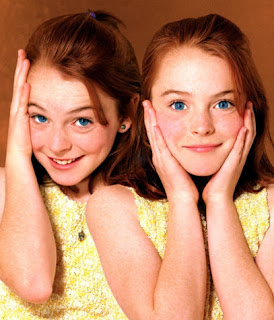 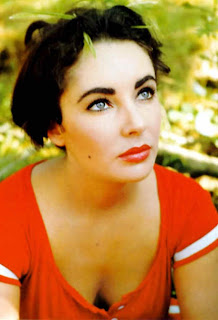 She doesn't begin to look remotely as beautiful as her.  True, Lindsay is still a pretty girl, but she's had quite a lot of pictures plastered everywhere where basically she looks like an old grandmother, beat up, burned out and looking like crap.

I am glad though that she finally ditched that awful blond hair.  It did nothing for her.

Posted by https://jenniferjofaypaperdolls/blogspot.com at 9:55 AM