I've been doing a bunch of knitting lately.  I've got to make myself write more.  I find myself doing so many other things lately.

I've been doing some sewing too.

I want to do a few craft shows in the fall.  I will have my paper dolls there again, but I don't know if I want to drag the big card rack this year.  I'm thinking I would rather set up two card tables and have different baskets nearby filled with crafts and the paper dolls and photo greeting cards can be in some.  They didn't really do very well.  People looked at them and loved them, but didn't need them.

I'm working on finishing up my large skirt project that I think I started in December and it still isn't done.  I'm past the knees now and finally decided to switch to a pretty pink border for the bottom.  And I'm not sure if I am going to add any beads.

Then I've of course gotten sidetracked a lot by selling stuff on ebay, which is very addicting and worth it.  I recently bought a few outfits at a yardsale for 50 cents and they ended up going for $6 and $7 each.  Made my money back for sure for all the yardsaling that day as a bunch of the other outfits sold too.

So, in between selling on ebay and watching the auctions end, I've been doing a little sewing.  I'm whipping up some cute fabric stretch bracelets and maybe some headbands.

Then, I have been repinning stuff on that addicting and awesome Pinterest site!  That is so much fun.  I usually go there once or twice a day and search for things that I like, find fun recipes and check out some tutorials.

I learned how to cut up tee shirts and make tee shirt braided bracelets, tee shirt yarn, a potential tee shirt bag that I cut up and forgot that I have to sew it at some point, a few cool sugar scrubs, recipes, and tutorials for those pretty fabric roses.  Still learning how to do that one.  I made one fabric rose yesterday that looked pretty good.  I need more practice.

Some of the recipes I tried were an ice cream punch pouring coffee on top.  I ended up not doing the whole recipe.  I decided to just put a few scoops of ice cream in a cup and poured my coffee in and I still needed to add more sugar as it wasn't sweet enough.

Yesterday, I tried a hummus recipe, a pudding dessert and adding cool whip.  Sickly sweet.  Gnoddi recipe from the Today Show.  That's resting in seminola flour and I'm going to cook it up tomorrow.

And while I was at it, after the sugar scrub which needed an orange, I took the orange peels and put them in a jar and poured in vinegar for that natural cleaner from Pinterest.

I'm a little skeptical of posting my stuff on Pinterest as I've heard there's been a lot of controversy about pinning your stuff.  Once it is up, anyone can take it and do whatever they want with it.

So, in between the sewing projects, I was making some fun pincushions a few days ago.  Sticking them into tea cups and coffee cups.  Another Pinterest inspired project.  They will be in my craft show too.  Of course I've made a few for me and each of my girls got one.  And I'm going to make one for my sister and sister n law.

And I whipped up a bunch of felted bangle bracelets, that I need to wash and felt at some point.  I plan to have lots of different types of bracelets for my craft shows, knitted, felted, fabric, beaded, etc...

All you do is knit three or four stitches on your needles and instead of turning your work, you just slide your stitches to the other end and knit from behind.  Creates the i-cord.  Fun.

And then in the last few days and weeks, I have started unravelling knitting.  I found a ribbon knitted scarf at Goodwill a few weeks ago and unravelled it.  Very easy.

Then in the last few days, I have been unravelling other projects.  The easy ones were a few of my knitted scarves I had done for my girls.  Well, the scarves had just been sitting being untouched for a few years.  I unravelled them.  It took a little while for some of them.  Two scarves were made of boucle yarn and it kept catching along the way.  A white scarf I got at a yardsale a few years ago was easy to unravel.

Then, a few days ago I had watched a You Tube video tutorial on how to unravel a sweater.  Tried one and what a frickin pain in the neck.  I cut along the seams which appeared to be a good seam and not the bad one.  Well, the sweater was machine knit, and didn't unravel well at all.  I probably only got past the first row and gave up.

Yesterday, I tried to unravel two recent ones that I got at a yardsale last week and they were a pain in the neck too.  I couldn't even find the end of the yarn to begin to unravel them, even though they looked like they were handmade.

Today, I wanted to get some scarves at Goodwill and do more unravelling.  Well, they were not worth it either.  Once again, I couldn't find the end of the yarn to begin unravelling.  And I bought a baby hat that was made of cotton yarn.  I began unravelling it and it took a while to start.  I found the string for that one and had to unravel the beginnings.  And then once I was past that, it began to unravel like a piece of cake for about three or four rows, and then I had to unravel each stitch individually which suddenly was a pain in the neck.  Here I am thinking, why isn't the whole thing just unravelling as you pull it from each stitch?

That's what should happen to most handmade knitting stuff.  And you get a pile of ramen noodles that you have to wind up.  That's if you have a good piece of handknitting that will unravel like a good yarn for you.

So, I got frustrated and threw that into the trash.  Three or four other scarves, I didn't even get to first base with unravelling, so they are now listed on ebay.  Not sure if they will go at this time of year though.

And here I am still looking at that knitted skirt that needs to be done.

And I was on Ravelry for a little bit last night looking for patterns to bookmark in my library.  Lots of them are free and I pay for some of them.  I paid a little bit for a leggings pattern for me.  I hate it when I buy leggings in the stores, Large sizes and they still are way too tight around the waist.  So I am thinking, I would like to make my own and make sure that they fit.

And as I was looking at patterns, I tried to test out my girls and see if they would want me to knit anything for them.  They kind of frowned on the skirt for girls.  It was pink, which is not their favorite color anymore. I told them it could be done in any color.  Still not thrilled.  Not going to waste my time making a skirt for them.  I would be unravelling it for sure.

I think I did sell them on a few cool legwarmers.  Julia was kind of liking a striped one.  She wanted black and white.  She will be settling for navy blue yarn that I found at our local yarn shop.  They didn't have black.  And I might throw in a yellow or green stripe.  And I am also picturing myself unravelling those in a few years too.  Untouched and in need of another project.

And those cabled headbands are looking quite pretty and cabled bracelets.

So, right now, crafting is on my brain.  But I know I need to do more writing too.  Just have to find the time for everything.  That's a pipe dream!

My youngest just got glasses today.  I told the bus driver that was where she was this morning, picking them up and the bus driver was so negative and seemed to think it was a bad thing.  All I could think was why was she making it out to be a bad thing?  Here I am thinking, "She's going to be able to see better.  That's a good thing."

I'm thinking the bus driver was thinking of kids picking on her or maybe her breaking them.  Who knows.  Or maybe she was thinking of other eyesight problems in the future.  Good lord.  The important thing is that she will see better with them and it will help her out in school.  Most kids these days, don't seem to pick on others who have glasses.  It just doesn't seem to be a big thing.

I do remember years ago, that people with glasses got called "Four Eyes."  That's in the past.

My oldest got his first checking account a few weeks ago.  Last week I discovered one of his checks lying around.  He wrote it out to Barack Obama for one million dollars.  I got the biggest laugh out of that, and I told him he better write VOID on it before one of his friends decides to joke around and send it to Obama.  Like he needs the moolah!

And looking forward to more yardsales tomorrow and Saturday and Sunday.  Which means I will be spending some more time on Ebay listing it etc.... 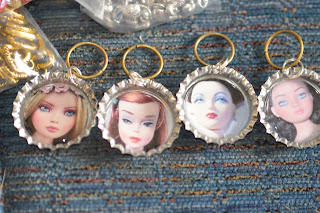 My cool doll bottle cap knitting markers.  They haven't sold yet on Ebay, so I might end up keeping these ones.  or they will be in my craft shows.

Posted by https://jenniferjofaypaperdolls/blogspot.com at 4:12 PM