Doing Moronic Things and Proud of It!

On the hunt for more knitting needles this summer.  Like I need them, but I want them. 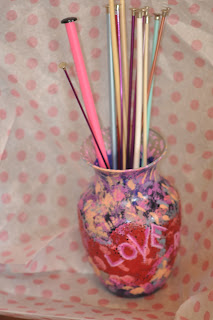 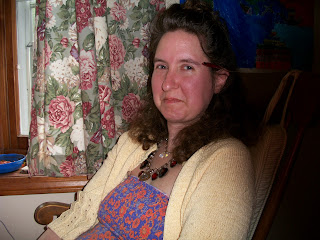 Me quite a few years ago, maybe thinking of doing something moronic.


Have you ever felt like a silly moron?  Done something so stupid, and it could have been prevented?  Laughed at yourself afterwards?  Join our club!

I've been a moron this afternoon.

Well, earlier today, I stopped blogging and went on my errand and went to three yard sales.  Found three outfits to list on ebay and found things for me.  It's always fun to find things to keep too.  I found another luggage that I am going to reinvent, some fabric and yarn.  Was excited to find the fabric and yarn.  Got a pink and green spotted  fabric and a floral one and a bunch of yarn at the same yard sale.  And I was satisfied that I talked them down a few bucks.  They wanted $3 for each fabric and talked her down to $2 each.  And then they had a bag of fabric for free.  My girls will like the felt and some of the other fabric.

Haven't quite decided what I will do to the luggage this time.  For the outside, which is an old navy blue fabric covered, I am thinking of adding some of the new fabric I got to the cover.  Possibly a woven striped effect.

So, anyway.  The moronic thing happened when I got back.  I settled in and was ready to list the three things I found.  I found a lovely Anne Cole Bikini and a few other woman's outfits.  I was going to list the bikini and was stunned when it wouldn't let me get online.

So I waited for that process and sewed up one of my headbands and a four patchwork beginnings of a jean denim blanket.  Another Pinterest inspired idea.  I started cutting up some squares from jeans a few days ago. So far it is a plain jean square mixed with floral covering the other jean square. And tick tock, tick tock, I waited for the restore process to finish.

And still no connections and I couldn't figure out how to turn on the wireless.  Now, I was ticked off, as I had to march myself down to Best Buy and get it fixed and get back before Jake's bus got home.  He has Downs and I have to be home to meet him at the bus.  He gets home before the oldest arrives.

So, I drove to Best Buy.  Got there and got to the Geek squad and set up the pc.  The worker was waiting on another guy so I had to wait.  While I waited I clicked the no connections available.  Then silly me started looking at all the keys at the top.  Looked at the F1 key a moment and then something dawned on me.  There was a little symbol on it that looked like internet connections!  I pushed it and then looked at my internet and suddenly it was yellow again which meant connections are available.  So, I moronically asked the guy if that was what it was, and of course it was.

So, laughing and thinking what a moronic thing that was, I drove home and had twenty minutes to spare before Jake got home.

Now I know.  You learn something new every day.

So, now my three outfits are listed.  Yay!  And the bus arrived.  Then Sean's bus came and I see Sean and two of his friends walking up to the house.  And shortly after that, a fourth one arrived.  So they are amusing themselves in the basement.  Video games and all that teen age stuff.

And the girls arrived home and where asking if anything came in the mail at my house.  Told them I haven't checked today.  They're hoping for one of those Littlest Pet Shop characters.  Mollyanne is waiting for one to come from China.  So we might be making a quick trip soon and they haven't seen my cats in a while.  Might give me a chance to grab a few of my outfits I don't wear to list.

But if they start fighting we won't be going.  That's one thing about girls close in age.  They fight over the silliest things.  A few minutes ago they started into each other and are quiet now.  Mollyanne didn't like hearing Julia read out loud.  So I told them to stop fighting and for Julia to read silently.

All is well for a few minutes.

And one of my yard sale finds I reinvented this afternoon before I hopped back on the computer.  I found this pretty cobalt blue vase at a yard sale for fifty cents and dived right in.  I pulled out my good gloss gel.  I'm not going to use Modge Podge on the glass this time.  I did my first project on glass over a month ago and after applying the Modge Podge and the cheap acryllic paints, in a week it all started to crackle.

Which is okay if that is the effect you are after.  I also have some of that crackle glaze that I haven't tried on anything yet.

So, I applied the Golden gloss gel. And I started to glue the red heart doilies to it.  They glued pretty well.  They wanted to crease in a few spots, but over all it stuck to it pretty well.  I was going to do this to a mason jar, but hadn't gotten around to it.  I didn't want to clean the ones my ex had on the counter.  And this ended up being much prettier.

Then I got my good Golden acryllic paints that the girls don't know about and started to get creative.  And then wrote Love Rocks.  Let it dry for a while and then later applied another coat of the gloss gel.  I am excited to do this to a bunch more.  Maybe even decoupage or other media.

My girls are using the cheaper acryllic Folk Art paints.  And I keep finding more at a few yard sales and my ex cringes when I bring new ones to the already full basket.  Ha ha.  But you know kids, sometimes they go over board with using extra paint.  It's always good to have a supply on hand.

At the Fay house there is always an abundance of art supplies and crafting supplies.  Both my girls are really creative and artistic.  And my oldest is interested in the photography.  It's in their blood. 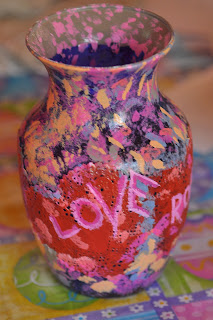 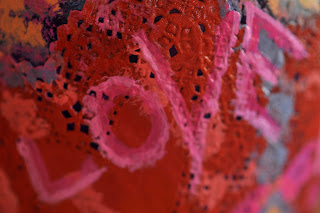 I decided to leave some of the pretty cobalt blue so it will have a pretty light quality to it.
Posted by https://jenniferjofaypaperdolls/blogspot.com at 1:50 PM