The Most Disgusting Tan Ever! 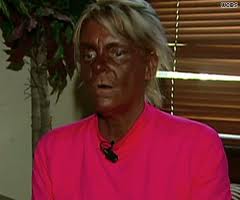 I'm sure that last week everyone has gotten quite the unwanted view of that nasty tan on that woman from what was it New Jersey, I think.  I saw her on the news last week and was quite disgusted by that terrible looking tan.

And I was furthermore appalled that she had brought her young daughter with her.  And there seems to be all the controversy about the possibility that she put her daughter in the tanning booth.  Sounds like the daughter had gone to school with a sun burn and claimed that she went tanning with Mommy.  So those teachers acted upon it and reported it to the police.

A child cannot go into a tanning booth until he or she is 14.  It's against the law.  So if that mother really put her in the booth, I hope she gets some time for it.  But from what I am hearing, it might have been misunderstood.  She claims that her daughter was just in the room with her while she was in the tanning booth.

Yet, I don't even think you should bring your child to the tanning salon period.  There's no need for them to be there.  Leave them home!  For god sake.  Most children don't like waiting anywhere anyway.  It's one thing to take your children shopping with you and other types of errands, but they don't need to accompany you to the tanning salon or on your dentist or doctor's appointments.

And then, I am thinking that it could be possible that the child did get a sunburn just from playing outside.  And the teachers could have possibly jumped to conclusions from listening to a child.  Sometimes children do make their words into a white lie without even knowing about it.  Who knows, as we weren't in that tanning room with them.

I'm glad that the tanning salon has banned the mother from coming back.  Maybe they could know some facts that made them think the child did indeed go into the tanning booth.  And then if so, it puts the tanning salon into jeopardy.  Smart to ban her!

And then there is that awful tan on the mother.  I have never in my life seen a tan quite like that.  How can someone want a tan like that?  Not me.  I would rather stay white and out of the sun than to have something like that.

I had to laugh last week when Al Roker made the comment,"She looks like Wiley Coyote after bombing."  That definitely fit the description.

I would have to say that she will be having skin cancer for sure.  It is in the cards for her.  And I'm sure that would be no fun.

It just looks like an unnatural tan to me.  She's getting quite a lot of response on her tan.  It's just opening up a big can of worms and high doctor's bills.

Posted by https://jenniferjofaypaperdolls/blogspot.com at 7:20 AM