She got her tape and began applying it to her flaws. She had flaws you know. And she also liked bright colors. It represented something that was missing in her life.

She held the rose that displayed the thorns. Obviously she had pricked herself earlier and was bleeding out. Yet, some of the blood was an invisible river. Pouring out and coloring her roses red.

And then she taped up her mouth, as she did not want to speak anymore. She suddenly was deaf. She refused to hear anything and didn't want to know what the truth held.

She was telling herself that if she kept quiet, nothing could hurt her. She could do no wrong anymore. Her words could not stab.

Someone please make her take off the bandages and release her words. You should not care if her words wound you. She will make you stronger.

Let her change your world. Let her live. 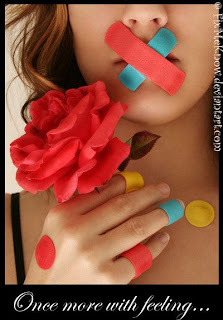 https://www.facebook.com/pages/Whats-Her-Name/377465768971845   here's a link to her facebook page.  I love the photos she posts on it.  And can see myself doing some story line starters from her photos.

The little girl with the blond hair and green eyes looked up into the blue, blue sky and the tall, tall trees. She could feel the blinding sun beat down on her. Was it drying up her tears? She couldn't seem to tell.

All she knew was that this was all that she could see for miles and miles. She sat on the rather large rock clad in her pink sweater with the black horse on it and her frilly pink tutu that was attached to black leggings that had a ruffled edge at the bottom.

Her little black mary jane shoes with the rubber soles dug into the dirt surrounding her. A black and white butterfly fluttered nearby and she wished she could just fly away home like it was going to do.

Where was her Mommy and her Daddy? How come they hadn't found her yet? Then she remembered something.

She had been in the car with them and said she had to go pee. When she came back, they were gone. And then, she was so little that she decided to just walk through the woods instead and now here she was, abandoned and alone.

Where could she go from here?

The life shined upon the old family camp. It's days were numbered for leaving the family, but a memory of it was based on decades of memories.

If only a house could talk, it would breathe a thousand words, or a million memories that were frozen in time. And maybe there would be unsaid memories, unrecorded thoughts, actions buried in time.

Where we chose to hide, what we did with all those tadpoles, coming in from the lake and having to wipe our sandy feet off before going inside the well loved camp.

It was a place for us to bury deep in our hearts and it comes to call when we want it too.

There is a place like this all over the world.

This was my Aunt Harriet's camp.  It was in our family for decades and finally three or years ago, we had to part with it after the separation.  We had bought it from her friend after my aunt died of a stroke and my kids and my sister's kids got to have their day in the sun at the camp.  So they have their memories too.

Before my aunt had it, her aunt had it and she bought it from her before I was born.  My great uncle Tony had the camp next door.


Posted by https://jenniferjofaypaperdolls/blogspot.com at 7:38 AM