First lines to a novel or a short story

What would be your first lines to a novel or a short story?  Usually you want to snag your readers on your first line.  And basically the first paragraph should intrigue a reader to stay and wait for more to come.  You really want to engage your reader.

If the first lines are not going to do it, then chances are they will not want to read the rest of the book.  The first page should really try to capture the idea of where the novel or short story is travelling to.  I have often put down a book after I have read the first five to ten pages.  If it doesn't hold my interest, and I don't want to learn more, I drop the book and it ends up being donated to the library or Goodwill.

Here are some cliche first lines:

Well, that's about all myself and my ex could think about for cliche first lines.  I guess go to all kinds of kids books to find more cliches.

Feel free to comment with cliche first lines you can think of and maybe you will jog my memory.

And of course a cliche last line would be:

And they lived happily ever after.

Us writers really need to think up more creative first lines to our novels.  It needs to really grasp our reader and the audience selected for our novels.  Their attention must be collected.  We need to describe our main character right off the bat.  And you usually want some type of mystery about where the story might lead.

But you don't want to reveal all in the first page.  But you want to entice them to want to know more about your heroine or hero.  Describe your heroine and perhaps something she is feeling.  Like my main character, Evangelean in my first novel I wrote.

Evangelean was a woman experiencing all kinds of changes in her marriage this year.  She felt like her ragdoll and was cast upon the floor to shatter into tiny shards of ceramic.  Her heart was also in bits and pieces.

I don't think I actually wrote it that way, but that is just an example.  Then, the readers suddenly want to know more about what her marriage was like.  Did something tragic happen to make her life a mess?  Who is Evangelean?

And most always, you want your characters to learn something and change in the course of the book.  They should come away at the end of the story a changed person, or something changes in their lives and they understand where their life is taking a new direction to.  They must always over come something.  And many times there is an obstacle (villian, jealous female, male, or other mean character) that gets in their way of happiness.

But your first lines should give a hint at something that is going to happen, already happened or some sort of mystery that the reader wants to know more about.

And you should keep giving them clues along the way.  Especially in a mystery novel.  But you don't want them to figure things out too soon.  They shouldn't know who the murderer is right away.  Make them stray and try to decipher it.

Although in one of my recent mystery novels, I have decided to let them know a little way into it that the murderer is a female who can't get pregnant.  But they won't know exactly who it is.  I kind of decided I wanted to give this away, so they could understand the thinking behind the murderer.  And then they can either choose to sympathise with the murderer or still be sickened.  That novel is still in the works.  Red Ribbons, the sequel to my published Black Roses mystery.

I went with Authorhouse and self published.  Spent way too much money and my royalties sucked.

Next time around I am going with CreateSpace.  I have heard they are cheaper.  And it is worth the money just to get published and have some copies for my kids.

And then of course, your novel needs to have a beginning, middle and ending.  And all the way through, you want to make sure that your writings are excellent and up to par.  Always be a good editor too.  That part is also half the fun.

It is always a good idea to read through your novel after and keep editing it.  Novels always have room for improvement.  Some novelists edit their novels at least ten to twenty times or more before they are absolutely finished.  Some times in doing this you also have the right to change the course of your novel.  Maybe the very beginning will change, and you choose to start your novel in a different place that you first did.

Maybe different things happen to the characters as the novel gets changed.  Maybe there is a different character that wasn't in it during your first draft.  Maybe someone died in the newer edition, but it hadn't happened in the first draft.

Editing also makes for better writing.  Most writers learn to be good editors.  They have a big desire to improve their craft. 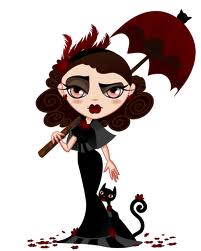 The rain poured down and made her fizzled and her life was drenched and ruined.  But her black cat was as happy and as dry as could be, same as her husband.  Happy as a lark.

Perhaps a beginning for something.

Sometimes you can get something from an image.  Have you ever tried to write something by looking at a picture, artwork or a photograph? 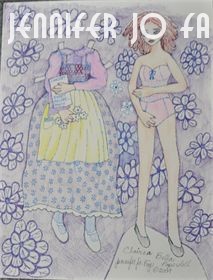 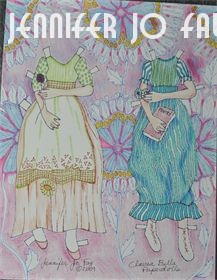 Posted by https://jenniferjofaypaperdolls/blogspot.com at 2:48 PM