What is your Earliest Memory?

What is your earliest memory?  How far back can you remember things?  Are you the type of person that has a good memory like a hawk?  Or are you the chameleon that forgets things as soon as it happens.  The memory has begun to fade away and you forget all about it.

I am one of the people that has a memory like a hawk.  I can remember things so far back.  I have often surprised lots of people including my kids preschool teachers.  I will remember something from years ago and people will be like, "Wow.  You're good."

Once a woman came into my line while I was waiting on her at Marshalls.  Back when I was working there.  I hadn't seen her in about four or five years, yet I remembered her vividly from my writing class.  Years ago, I used to take this creative writing class but this woman instructor.  Sarah Bartlett.  You should look her up.  I'm sure she has published some of her poetry.  She wrote some incredible stuff.  One I remember about the stages of the moon and the stages of love.  It was a wonderful piece.  She was so prolific.  She's a Vermont writer.  Her class she began was called Women Writing for a Change.  I still have the bumper sticker on my car.

It was a small class of about ten women.  All from different walks of life and writing different types of things.  Some were writing journals, memoirs and other fun pieces.  Some were writing very serious stuff about things that were going on with their lives.  It was a private class where we were able to share intimate things and it never left the classroom.  We got separated into groups of three and we each had perhaps three minutes to read our stuff we brought to class that night.  We also took breaks and had tea and snacks.  Then we got back into a large group and did little read arounds.  Then we all read back some of our favorite words that we heard.  We always got to sit on nice pillows on the floor and sometimes she would have a visual set up in the middle.

In the beginning of each class she had us pass around a special stone.  When we each held the stone, we had to say our name and then something that sprang to our mind.  She then would give us a few minutes to do a fast write.  Then later we would read what we wrote.  At the end of each class, she would pass around a lit candle and at the end she would blow it out and wish us well for the rest of the week.

It was like a ritual.  It was a lot of fun and sometimes I miss it.

But that's not my earliest memory.  How far back can a person really remember?  They often say you don't have too many memories about when you are a kid.  This is wrong.  Yes, maybe your memories of being a baby are foggy.  It is very hard to remember that far back.

I do remember sticking my feet out of the crib railings.  I guess that could be one of my earliest memories.
My mother had pictures of my sister and I sticking our feet out of the railings.  I tried to repeat this with my boys.  All my children slept in the same exact crib that I slept in.  The one with the lamb and the bunny at the end of the crib.

It did meet its day and is gone, but not the memories.

I have memories of being stuck in a portacrib for a nap.  Memories of Captain Kangaroo.  I remember him and maybe the bunny.  I've always had a fondness for bunnies.  And there was Mr. Greenjeans.  I can't remember too much about him, but I do remember his name.

I have memories of playing at Nursery School.  All I had to do was be walked across the street to our big office building for the neighborhood.  In one part people paid their rent and in a bigger section was the nursery for the neighborhood.  I remember a fair amount of kids, a little creative time and then a time where we could go back into a little room that was filled with toys.  Not that I can remember what I played with, but I remember a room filled with toys.

I remember many rooms filled with toys but that would be one of my first memories of nursery school.  I lived in a little neighborhood called Redbank in South Portland, Maine.  My parents had an apartment on the second floor of a two family apartment.  The village was full of these apartments.  Some were an upstairs and a downstairs and ours was an upstairs apartment and our neighbors lived downstairs.

The houses were originally built during the war time for the familys.  And also for the workers from the shipyard.  For years there was hardly anything around the village.  It was all woods and where the Maine Mall now resides there used to be a pig farm when my mother was growing up in the village.  My nana and grampy lived just about one street away.  We could see their house from our kitchen.  All we had to do was walk to the end of the street, through the field and we were at their house.

My mother grew up there too.  She was born and raised and then grown up and died in Redbank village.  She lived there all her life.  Once after my father's grandmother died she and my dad were offered her house in Cape Elizabeth, two towns away.  My mother didn't want to leave her precious village.  It was the life that she loved and she didn't want to move away from her parents even though it would have only been a few towns away.

She led a simple life I think, but she was a wonderful mother.  She was my icon.  We put her on a pedestal.  My grammy always would praise her for doing a wonderful job of raising us.  She heard it every time we went over to visit our grammy.  I think she had it hard with her though sometimes.  No relationship with an inlaw is perfect.

My grammy was from the old world and was probably a little bit judgemental.  Same with my Aunt Harriet.  They had a certain belief of the way children should be raised or any other value or trait etc and if it wasn't up to their standards it wasn't good.

You had to watch what was said around our grammy.  When we were little, we couldn't even say darn.  And good lord when we were growing up and when my mother was growing up, gay meant happy.  Today's world has really taken great leaps and bounds.

That old world kind of got buried.

But anyway, it is really great to push yourself to remember.  How many memories can you remember?

I can even remember some of my childhood dreams.

I used to hate that daisy ham that my mother used to make us eat.  One night when I was little I dreamed that I was swimming inside a daisy ham.  Of course I was really tiny.

And then another dream I remember as a small child was floating into the ocean with my nightgown on and I came across a little ship with some characters on it.  There was a black bunny resembling the black evil bunny from the Rankin Bass easter special.  And there was a little girl who wanted to be my friend.  I think she might have been Pebbles from the Flintstones.

It's kind of funny how we can remember some of our dreams.  Usually the way things go, is that when we wake up we can't remember the dream.

I also remember having a dream that my grammy was alive and living in New Mexico.  This was perhaps a year after she died.  Of course when I woke up she was still dead.

I used to have the same type of dream after my mother died.  I would be dreaming that she was still alive and nothing had changed.  And then you wake up and you know that the nightmare really happened.  Death took her away.

Life isn't fair.  She's been gone ten years and this year it will be pushing eleven.  She died at 53 or 54 of colon cancer that spread to her liver.  We have always said if the doctor's hadn't left a margin, she might still be here.  She suffered for three years.

I should probably head over there next and do my NaBloPoMo there.  I haven't written in my blog there yet and need to do it this year. 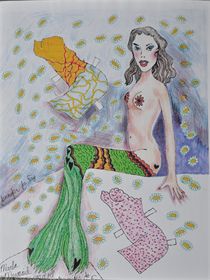 Marla Mermaid paper dolls.  She is a two page set.  I should make some more mermaid ones soon.  And more fairies.  Got all kinds of thoughts with this too, but only a certain amount of time.

We really need to balance everything out so that we can do everything that we want to do.  Hard sometimes. 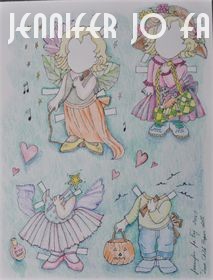 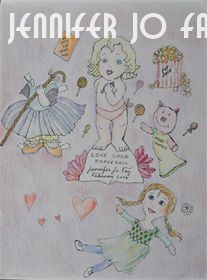 Posted by https://jenniferjofaypaperdolls/blogspot.com at 5:58 PM